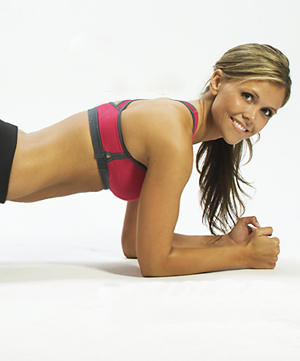 Women for the most part, want a flat stomach with some nice definition.  Unfortunately, a lot of today’s “expert” advice won’t help with your desired look, but instead contribute to a big, bulky waistline.  So, head back to part 5 of my Abs Q & A and find out which exercises to avoid and which you must include in your workouts to avoid ‘wasting’ your time.

Now, if you’re looking to really challenge your abs and want to know which are not only the best but safest exercises for doing just that, then you’ll want to read on…

What are the most intense ab exercises?

So, we got our three categories of answers here….

Now, the type of exercises that I DON’T RECOMMEND because they’re not necessary for us to get lean, flat, sexy abs are the most intense exercises.

Like weighted sit ups, those are the greatest load that you can apply on the abdominals. Kneeling crunches or cable crunches where you do the spinal flexion, the rounding of the back. If you’re holding 100 pounds on the cable stack that’s obviously a more intense exercise than doing a plank.

But, we AVOID those exercises because of the RISK that they put on your LOWER BACK. 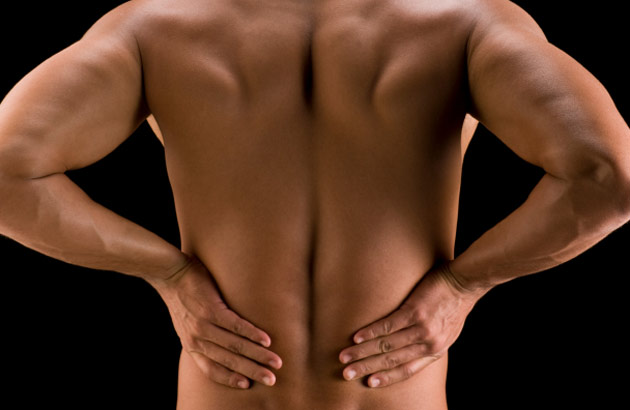 So, there’s a benefit to those exercises of muscular hypertrophy for the abdominals, but there’s a big negative, a big con to it in that that’s how you can get hurt. Over time or acutely that is where you’re going to cause some problems.

By definition, using the word intense, using the definition of intense as being able to put the greatest resistance on the abdominals is going to be any exercise where you’re adding external resistance.

So, yes, the seated nautilus crunch machine is very intense for your abdominals, but is it also very damaging to your spine? Over the long term, yes it is, unfortunately.

Let’s go to our second category of exercises…

…which are kind of our 21st Century abdominal exercises where we do not do the spinal flexion, but we maybe do a little bit of extension in the abs.

Stability ball roll out is probably going to be one of our most intense exercises, but for some people that’s actually going to cause a little bit of a problem in the shoulder. If you have any problems with your rotator cuff it may not be the best exercise for you.

Stability ball jack knives are another intense exercise. Not nearly as intense in terms of the soreness that you can get from the stability ball roll out, because with the roll out the reason why you’re adding to, I guess the intensity of the exercise and the reason why you’re causing that soreness is because you’re stretching your abdominals on the way out under load.

That’s how you get SORE is eccentric contractions under resistance.

So, if you’ve ever done and RDL properly and unless you have extreme flexibility this will apply to you, if you’ve done an RDL Romanian Deadlift and you’ve used weight you’ve stretched hamstrings under load and that’s caused a great stress on them and that’s caused damage in the fiber.

So, that’s why I always say that the roll out is the intense exercise in that second category, because you are getting stretch under load and that’s going to cause soreness the next day.

Now onto the third category of exercises….

The answer here is going to be a stability ball plank, because it’s a more advanced version of a plank. It’s a very difficult exercise.

Research quoted in Men’s Health Magazine shows that it works the abdominals 30 percent HARDER than a regular plank. 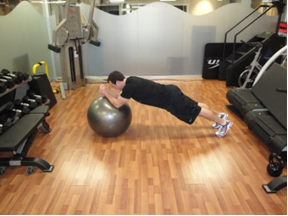 So, you can have soreness in that. I’ve had clients come back two days later from a training session with me and regular chinups caused a lot of soreness, because you’re really contracting your abdominals.

Really WHAT YOU SHOULD BE DOING is….

…making every intense exercise that’s not an ab exercise into an intense ab exercise by making sure you’re contracting those muscles.

I take the low back health and the recommendations of Doctor Stewart Magill very seriously.

So, you may be listening to this call and saying, “I’ve been doing crunches for 35 years, since I was eight years old and I was mini Hercules and I’ve never had a problem.” You know what? God bless you. I really am happy that you’re injury free, but I’m not going to put those exercises into my program because I still think we don’t need it to achieve the results that we want.

Go all the way back to part 1 and that question was… What’s the best way to get rid of the belly fat and get back to our flat abs. It’s diet, intervals, metabolic resistance training, then ab training.

So, that’s what I believe in.

The most intense exercises for losing belly fat are going to be those metabolic circuits and interval training.

Really, people with interval training I’ve had clients and athletes come back with very sore abs the next day after interval training, especially if you get into different types of movement patterns.

That’s all I want to say about that.