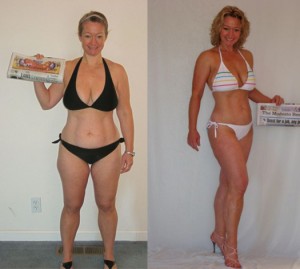 There are few sources of inspiration that work better in motivating you into action than to read the transformation success stories of people just like you,  people who were once faced with similar struggles that you’re up against now.

So, today, and over the next few days I’ll be sharing an interview I did with Catherine Gordon, winner of the 2nd TT Transformation Contest. Catherine actually competed in the fisrt contest, and saw incredible results, but the second time around she had to contend with the big bad workout plateau.

Read on to learn some great takeaway lessons you can instantly apply to your own fat loss journey. Enjoy!

Craig: It’s very good to finally speak with you. I really look forward to learning exactly everything that you did that was really successful for you in your transformation.

Catherine: I look forward to sharing it. I’ve had a great experience.

Craig: Great. Why don’t you just tell us a little bit about yourself, your background to this, maybe even how you found Turbulence Training and where you were before you got started with everything? What you were doing, where you were struggling, where you were having success with your fitness, and then we can move on from there.

Catherine: Okay. A couple of years ago, Josh my son just turned eight, so it would have been nine years ago, I had gained a lot of weight during my pregnancy, which is pretty typical. I had quit smoking to get ready, and I just ate EVERYTHING in sight.

I tried different diets, like South Beach and Atkins, and Weight Watchers. I had managed to get a fair amount of the weight off, but I was STUCK right around 150 pounds at 5 foot 2, which is a lot.

You have to understand, I had always worked out and at this time I was going to the gym four times a week.

I was trying to stick to diets sometimes get down around 143, but I could never get below 140. I’d lose some weight and it would just go right back up. Everything I tried to do would eventually STOP working.

I was familiar with some of the other programs on the internet. I actually found Vince Del Monte’s program first, which was more of a muscle building program and my husband did really well on that program.

I had a bad experience around the time of my birthday when somebody asked if my son was my son or my grandson.

Catherine: Yes, it was really bad. I was like, “This is not good.” At that point I had gotten Turbulence Training, and done the workouts, but I hadn’t really committed to them.

I saw the pictures of past winners, especially the picture of Emily. I looked at the pictures, and I thought, “This is possible. I can do this.”  So, really it was exactly a year ago. I think that’s when I started the second transformation contest.

I had already been doing the TT workouts for about four weeks, so I was kind of familiar with the program. I was ready to go! I noticed right away the pounds started to come off. I started to tighten up, and I started to get stronger.

I’m definitely one of those people who have never really been thin. It’s been a life long struggle always ballooning up. TT finally let me get back into shape.

Craig: Let’s stay with the time when you first got into the contest. What were you thinking and what might you have to say to folks that are scared and skeptical or confused about how to get going?

Catherine: Well, some of the most important things I learned are that there is a little period to get going for some people. Not for everybody, some people out of the gate seem to be going crazy right away, but I’ve been on the boards and on the forums for a year now, and I’ve noticed that a lot of people have the same experience.

It can take a little BIT OF TIME to GET UP TO SPEED  on how to use the workouts. If you start losing weight immediately from day one, that’s great, but you will need to have little patience getting through the learning curve with the program…

…Some of it is getting rid of some of the stubbornness. For example, it was really hard for me to give up the elliptical. Do you know why? I used to read my magazines on the elliptical.

Catherine: It was like, when would I read People magazine while I was trying to do intervals. I felt I was working really hard.

As far as skepticism goes coming from someone who has transformed, I don’t know what to say other than it really works.  I think the thing that was different for me was the GOAL SETTING SHEET on the first page. You literally have to sit down and pick three goals.

You pick a longer term goal, a shorter term goal and a goal that you can do every week. I really had to look at “What do I want? How am I going to get it? By when will I have it?”

This was one of the things that made the difference going into the first contest.

Craig: So, you would definitely recommend that people not skip over that part and make sure they do the mental side of things as well?

That was the difference. Just that couple of pages right there in the packet really made a difference. Then there’s something else that happened to me, and I should go back and look at the forums from that contest. Something happened, I don’t know whether it was four weeks in or six weeks in.

I was writing my post, and I was thinking, “I could win this thing.” Seriously!  I wrote it and I almost went back and took it out. I was like, “Oh my goodness, what are people going to think of me if I write that I think I can win?”

Another thing that was really important, Craig, is that there was a point after a few weeks into the contest where it was really starting to work. I was really in the groove.

I was like, “Wow. I can really transform my body, and I could possibly win this thing.” You remember I was up against Carla, who was amazing. She had an amazing transformation getting so amazingly lean. I think that’s another thing that was so crucial for me is that you’ve got to get to a point where you BELIEVE YOU CAN DO IT.

Craig: Yes. I really like how you went in ready. You were focused on doing it, and you knew it was going to work. That’s the kind of mental mindset that is really important.

So,  going back to people who are just getting started with this. Would you say there’s a learning curve in terms of maybe a week or so to get used to hitting the right intensities and not to be frustrated with that in the first week? Because it is quite different from what most people are doing regularly.

Catherine: That’s a really important thing to bring up, because what I see happening and what happened to me is that the beginning and intermediate programs can be very deceptive. You can go in and you can hit them hard, and you can make yourself so sore that you practically cannot move for a week.

I’m not the only one who has experienced this or read about this. I think you have to be really careful to follow the guidelines. If it says for the first week only do two sets,  then only do two sets, because you create a great deal of soreness and frustration.

Now, you have to approach it with a sense of fun. For example, my favorite was the stability ball jack knife. Oh my gosh, I looked like

an idiot. I remember going into the health club and asking one of the yoga teachers and one of the trainers to show me how to do the exercise.

We started out with my hands on the floor, and I’d crawl out over the ball, and I’d curl them in. Now I can bang them out like it’s no problem and drink a cup of coffee while I do them. But, when I first started out there were some exercises that are really CHALLENGING if you’ve never done them before.

Bulgarian split squats, oh my lord where you stand there, and you put the top of your foot behind you. For me, I used to dance, I

choreograph now, I consider myself fairly athletic, I couldn’t hold anything in those Bulgarian split squats except maybe the wall. I think that’s another thing that people may not realize.

The funny thing about TT is that you’ve got everybody from stay at home moms to meatheads doing it. You have to understand that some of the exercises may be awkward to begin with.

One of my favorites in a different way is the stick up, because you look at the stick up and think, “What is this? I’m going to stand against a wall and raise my arms over my head?” It’s the best shoulder warm up exercise I’ve ever done.

I think a lot of time when you start TT it’s almost like you have to suspend your disbelief a little bit and say, “Okay. I’m going to give it a shot,” and believe that it’s going to work.

Craig: You make some great points there. Everything is a little bit different and there will be that slight learning curve. Some people will go right into it, and it will be perfect and there will be a lot of fat loss right away.

Other people, and actually everybody, like you said, needs to rein it in a little bit, even if you think you’re pretty super fit right now, because you don’t want to be too sore after those first workouts.

Catherine: One other thing I would like to mention, and I’m not the only one who has said this but when you first start the interval training you feel like you’re going to throw up.

Catherine: Even to the point where you feel like, “Oh, no, my stomach hurts.” But, it doesn’t hurt anymore. It’s good, I like it.

Craig: The great thing about the interval stuff is it goes by so much FASTER. Unfortunately, you don’t get to read your magazines as effectively, it’s a little too hard to focus.

Catherine: They’re piling up on the coffee table, they really are.

Craig: There you go.

Part 2 of my interview with the second Turbulence Training Transformation Contest winner, Catherine Gordon, will be continued on Monday…

To read Catherine’s and other winning transformation stories check out www.TransformationContest.com.