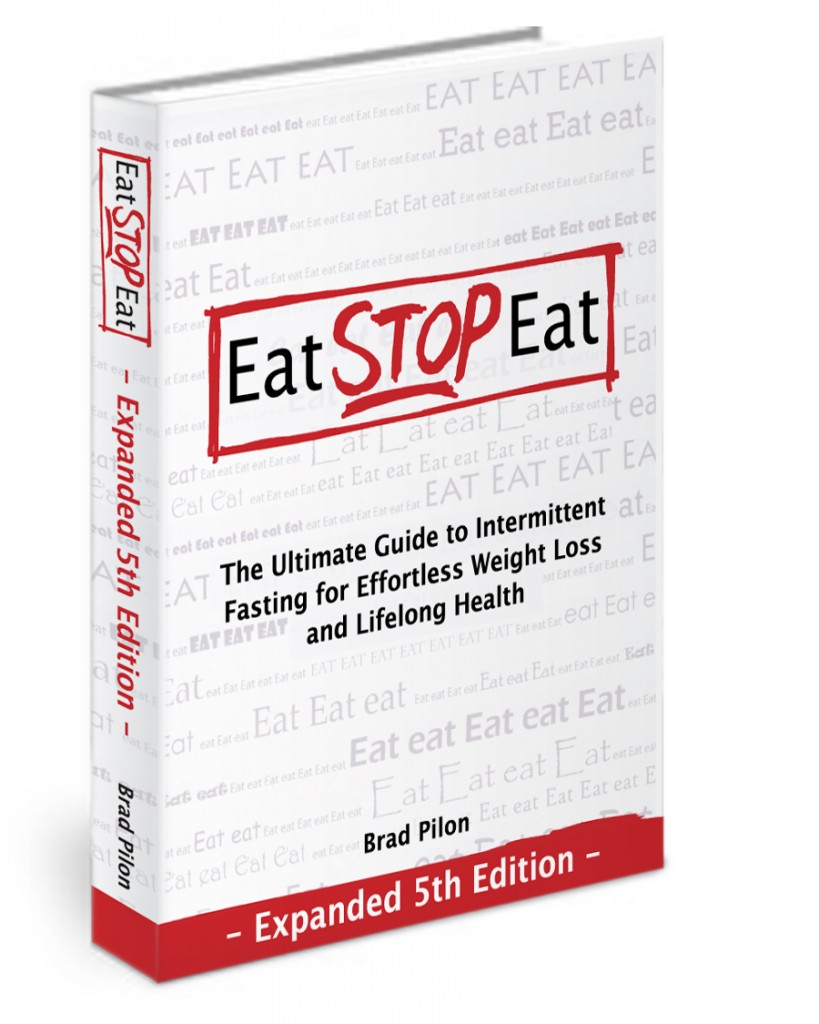 Hey, this is Craig Ballantyne from TurbulenceTraining.com and here with another Turbulence Training podcast. This time we have a special guest on who’s a nutrition expert and he is I guess you could say like the half-trainer or the half-nutritionist of many of the Turbulence Training transformation contest winners because they’ve used his program and it’s Brad Pilon from Eat. Stop. Eat. So Brad, welcome to the call.

Brad: Thanks for having me, buddy.

Craig: So your program has been used by so many people that have won the contest, so many of them, I mean not just people getting third place but people winning the contest and the people getting second place in the same contest. But now you’re telling us it’s gotten even better so what version of Eat. Stop .Eat. are you on now?

Brad: I’m on version 6. So Eat. Stop. Eat. was released in early 2007 and I think I’ve just been about almost yearly updates of it. This is a fairly large one we’ve done this time, incorporating a whole lot of information to really kind of bring to the forefront some of the things people have been asking about when it comes to fasting because it’s gotten so popular over the recent year or two.

Craig: So what would those things be?

Brad: For most part what people have been really asking about is the gender differences in fasting. Is fasting the same for men as it is for women? So I really delved into the research on short periods of fasting and women or men, and really tried to look and see if there in fact were gender differences. There were some things that definitely had to be addressed in the book so that’s been included in.

I’ve also gone over the idea of a longer fast. There are a lot of questions. People like to go to extremes so when I say a 24-hour fast once or twice a week, naturally people start asking about a 36-hour fast, a 48-hour fast, can you do the 24-hour fast back to back, etc. So I really explained the research behind longer fasts. While a 72-hour fast doesn’t sound that long, I mean it’s still considered short-term fasting, I think what I had to remind people in this copy of Eat. Stop. Eat. was that that’s actually three times longer than I recommend.

So while it still sort of sounds less than a week, a lot of things happen when you fast for triple the length that I was originally suggesting. So I covered off the concept of the longer fast and just kind of explained to people why I really don’t advocate them nor do I use them in Eat. Stop. Eat.

Craig: Interesting. We’re going to get into some various fasting lengths and talk about that because there have been a lot of different ones out now but it just happens that Ramadan, I believe, has started right now and it is summertime for the first time that I’ve ever known it to be so it’s very difficult for a lot of people to be doing that. Is there anything that you’ve learned about Ramadan fasting because that tends to be one of the most popular versions of fasting that is studied in the scientific literature, anything that you just want to share with people that are interesting facts

Brad: Yeah, well Ramadan’s very interesting because it’s a month straight of fasting during the daylight hours. In areas like in Canada where I live, the days and nights can vary considerable depending on the season. So right now, being in the summer, you’re looking at upwards of 16 to 18 hours of straight fasting and the interesting thing about Ramadan is we’re not just talking about not eating. These are dry fasts so not only do you not get any food, you don’t get water, you don’t get coffee, no pop, no beer, no nothing. You’re abstaining for the entire day.

So Ramadan poses a very interesting thing for us to study because what it gives us is an amazing history of health and safety data for fasting but you have to be careful with how you interpret Ramadan fasting because in fact there is no fluid intake, and not only is there not fluid intake but during the month of Ramadan what you do find is that people largely increase the amount of food they eat at night. People practicing Ramadan would tend to stay up into the evening hours to eat and now, especially during summer, they will get up early to eat before the fast begins.

But it’s very interesting because you get lots of very good data from the practice of Ramadan but you always have to remember to apply that data properly since the most of us who are fasting for health and aesthetic reasons aren’t doing it through dry fasts.

We’re still taking in lots of water, most of it black coffee or other things, during our fasts. So while they’re very similar, we shouldn’t get caught in thinking they’re the exact same thing. I’ve tried a dry fast and it’s not something I would do on purpose, for me.

Craig: Right and there’s actually a few people in the NFL that now do Ramadan fasting as well. I remember they had something on the Pittsburgh Stealer player a couple of years ago. Do you remember that at all?

Brad: Yeah, absolutely. We’ve got NFL players, NHL players. We’ve got people who practice Ramadan in just about every major sport and they work around it. The conservation of fluid is something they kind of have to be careful of so for hot games, etc., but in terms of performance, it’s not like you’d watch a game and be like oh, it’s Ramadan, that’s why he’s playing so poorly.

You don’t notice and that’s one of the exciting things, that you have to research on Ramadan and not only athletes, football players, and hockey players, but you also have data from power athletes and that’s really the data for us, as people who enjoy the lifting of heavy things and putting them back down, to realize that during periods of fasting they do maintain their strength. It’s especially important because again they’re doing a dry fast, right? We’re still well-hydrated.

Right now, I’m playing around with this 16-8 ones and it’s very easy if you eat dinner a couple of hours before bed and then you sleep your regular seven or eight hours, then you get up, and then you only have a few hours to go after that, and especially with green tea it makes the day go by, those final few hours go by quite easily. That’s kind of what the article in Men’s Journal that you were quoted in. A lot of the guys were practicing that in that article as well but yours is 1 x 24 so compare how that is against seven days a week of 16-8. Do people find that it’s easier to use your program? Is there any data on differences in results of people who’ve tried 16-8 and then come back to your program?

Brad: If you compare the programs, they’re very similar. In terms of total time fasting with let’s say 2 x 24 as the more extreme version of what I practice, if you include the overnight fast of a typical person being around eight or ten hours, the total time spent fasting per week is less with my program but not by much. We’re talking about 80% of what you’d be fasting for 16-8.

16-8 sounds pretty scary to a lot of people. What you’ve touched on, which is perfect, is really when done properly, it’s just an extension of the night-time fast, right? You stop eating a little bit earlier before you go to bed and then when you wake up, you sort of take a brief pause and don’t start eating right away and bang, you’re only about two or three hours away from the full 16. So it tends to be pretty easy to do.

What we found is that depending on a couple of factors, which one people tend to gravitate towards. If you’re a person who needs a lot of flexibility, then the benefit of a 1 x 24 or 2 x 24, so my method, is that you have flexibility when you choose to fast since it’s not every day.

It’s once or twice a week. So if I was planning on fasting tonight but a big dinner came up, I don’t have to freak out. I can just postpone my fast or do it earlier, depending on which is more convenient for me. Whereas the 16-8 is a bit more regimented. You’re trying to accomplish a fast every single day.

Now they both have the advantage of that feeling of a small win. With dieting, a lot of people describe traditional dieting as kind of the slow inevitable march to a failure. You’re eventually going to slip up. It’s sort of negatively reinforces bad habits when you do slip up. You kind of think, “I’m just not strong enough for this.” Both 16-8 and the 1 x 24 or 2 x 24 fasting allow you to have that small win, that kind of like

“Yeah! Nailed it. I can do this and I’m done,” the difference being really in the amount of regiment.

So doing a 1 x 24, a 2 x 24, let’s say you were doing a dinner to dinner fast, if it’s working quite, no, this doesn’t feel right, you don’t really look forward to your fasting and more it’s become kind of a chore, you switch to lunch to lunch and maybe everything changes and it’s better. Maybe it doesn’t. Maybe what you want to do is switch to a shorter fast with 16 x 8 and do it daily or maybe five times a week with the weekend off, that sort of thing.

Fasting is an incredibly flexible, incredibly useful tool but it is merely a tool, which means you’re allowed to manipulate it and make it fit your life and balance into the type of things that you’re into with your life. So if you need more recovery time, 1 x 24. If you’re working along at 16 x 8 and everything feels great, you stay. You just keep track of it all.

We’ll end it here for today. I hope you can join us tomorrow for part 2 or  click here to listen to the call.