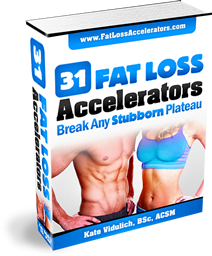 Craig: Hey everyone! This is Craig Ballantyne from TurbulenceTraining.com here with one of the certified Turbulence trainers who helped me at the recent Turbulence Training Summit. She brought her Fat Loss Accelerators to the boot camp and everyone was loving it. Kate, why don’t you introduce yourself to everybody who’s listening?

Kate:  Sure. Thanks so much for having me today, Craig. It’s great to be here. Like Craig said, my name is Kate Vidulich. I am an exercise physiologist and a Certified Turbulence Trainer. Originally I’m from Australia but right now I’m living in New York.

I went to university back in Australia and completed my Bachelor of Science and majored in Health and Exercise Science and when I came across to New York, I started working out in a gym and then moved into sort of my own private training business, which I now operate in the Upper Eastside of Manhattan.

I consult with clients one on one, also online coaching clients, and now Fat Loss Accelerators is my online program and business here. So that’s where I’m at right now and I’m looking forward to the future

Craig: Yeah, so why don’t you tell us how working with those high end, elite, very rich, very busy clients in New York led to you developing your Fat Loss Accelerators program?

Kate: Sure. Well the main thing that all of these people have in common is that they’re very short of time. There is no time to be wasted in a workout and there’s no extra time to go to the gym and do 30 to 45 minutes of cardio, which we know is not effective for fat loss anyway but people just don’t have time like that.

So my program really was based initially on trying to find a way to get effective fat loss results as quickly as possible in as little amount of time as possible. That’s where the idea of this came from when I initially started working with these high end time-constrained clients.

Craig: Cool. Why don’t you tell us a little bit about your version of metabolic training and Fat Loss Accelerators?

Kate: Sure. There are lots of different definitions out there with metabolic training these days. You can go to a gym and some people might call it battling ropes and kettlebells and someone else could just call it intervals.

The way I approach metabolic training is that it can just simply be defined as doing compound movements, meaning things like squats, push-ups, pull ups, all those big compound movements in non-competing fashion, meaning you’re not hitting the same muscle groups for each interval back to back.

You’re combing these two parts with an incomplete rest so people don’t have the opportunity to fully recover from one exercise before they’re moving into the next exercise in the complex. This is the goal in order to burn as many calories as possible, not only during the workout but then also after the workout. So you then want to be maximizing that after burn effect.

It’s not really necessarily the type of exercise that’s important. It’s really the intensity that counts and the duration of the interval and the rest periods to determine the energy pathway or the energy system that is called to action to be.

Craig: Why is that so important for fat loss?

Kate: The thing is that we want to try and maximize that after burn effect which means when you work harder and bring more intensity to the interval, then you’re having a greater post-exercise oxygen consumption, which is the EPOC effect, the after burn. So you’re burning a lot of calories during the workout but then after the workout, your body takes time to recover and repair, which places a lot of demand on these different energy systems. So you’re still having to burn calories after you work out and that’s the big thing.

Craig: Let’s get right to it. What do a couple of these workouts look like? I’m not even sure. Are some of them upper body only and some of them lower body only? If so, why don’t you take us through a total body, an upper body, and a lower body one just so we can all have something to get really excited about here?

Kate: Sure. I mean honestly I like the total body the most because you can do lots of movements and cycle from doing a lower body exercise to an upper body exercise, even throwing in like a half core exercise in the middle that keeps people flowing from one movement to the next.

Let’s start with a total body accelerator. So we’ll be looking at hitting all different big movement patterns so we could start out with a squat. You could do this either using a barbell or dumbbells but it’s good to have some kind of resistance because you can then progress using the weight to make it more challenging as you get stronger. You start out with say, maybe like a front squat, and then you could move into some kind of pressing motion.

Because you’re already standing, you don’t want to waste time by lying on a bench or going onto the floor so you could just go straight into a shoulder press, like a shoulder press overhead, and then you could go into a bent over row as an upper body movement. So with each of these exercises, you’re continuing to hold the same weight so you don’t waste any time by going and picking up different dumbbells or moving in the space in the gym. That will be three moves there.

Then you could also add in a lunge or a step, so you could do alternating reverse lunges or even lateral ones to hit your legs again. Then you can get down on the floor to finish off and add in say 20 cross-body mountain climbers just to get that last conditioning effect from the exercise and hit your core as well.

Craig: That’s really cool. You are just not losing a second in there for your clients. Now where do these workouts, these accelerators, get put into a workout? Are they going to be at the start, in the middle, or just at the end of the workout?

But initially when you start an accelerator like this, you don’t want to lift too heavy and you don’t want to totally blow yourself out for the rest of your workout. So you can definitely include that in the workout on one of the strength days, particularly if you’re training three times a week.

You could add in an accelerator say once or twice a week in order to just get that boost for the rest of your workout or you could also use it as an off-day conditioning workout rather than going off and doing a traditional cardio. You can do four to five rounds of one of these complexes. That will definitely help you to build, maintain the lean muscle and also to burn fat faster by not spending all that time on a treadmill or a bike.

Craig:  Great. What do your workout weeks look like with these people? Are they even able to come in more than twice a week or are you training then three or four times a week? How then do you fit in the Fat Loss Accelerators into the schedule?

Kate: Normally people can come either two to three times a week. I’ve had other clients that work five times week. When I have clients that have five times a week, we would usually set it up and use the accelerators as the two off-day conditioning circuits. Say we’d have Monday, Wednesday, Friday as more strength-based training and then the Tuesday and the Thursday as the Fat Loss Accelerators so the more circuit-based conditioning exercises with the dumbbells.

If someone only has twice a week where they’re only working out twice a week, it’s much more effective to add in to the beginning of your workout. So even if you just do a few less rounds say three rounds rather than four, that 90 seconds to two minutes of exercises back to back is going to create a metabolic effect that’s going to help you to accelerate your fat loss results.

We should stop for now and save my next question for tomorrow in part 2 of this expert interview series with Kate Vidulich, creator of Fat Loss Accelerators. Click here to hear the call