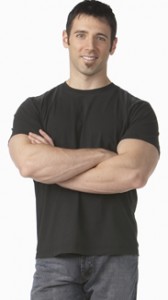 Dr. John Berardi is among the most prestigious and respected names in the fitness industry. We learned, in part 4 of this expert interview series, more about the unique approach that the Precision Nutrition program offers through its coaching techniques as it helps people to understand what nutrients the body needs to lose weight.

Today, the doctor shares with us his motivation behind offering a customized exercise and nutrition program specially designed for a vegetarian or meat eater.

Craig: Now, one of your coaches is a vegetarian, right?

Craig: Have you tried a vegetarian diet? If so what did you like and didn’t like? From what you learned can you tell us what you change in your programming for some of your clients?

John: Absolutely. My little experiment was a great one. I’d like to give a little history on what sort of got me into this, it’s kind of a funny story.

One day I was at the gym with one of my meat loving friends, he’s a great guy from New Jersey, unlike some of the guys on the Jersey Shore show.  We were approached by a fairly skinny guy who was new to the gym. He comes up to me and mentions that he loves my work and reads the articles on PrecisionNutrition.com all the time.

He asks if I could help him build muscle. The only caveat was that he was a vegan, so he doesn’t eat any animal products whatsoever! The first thing he asks me is “How can vegans build muscle?” So, of course my sarcastic New Jersey friend quips, “By eating meat.”  Even though we had a laugh, I went away from that interaction and I spent a lot of time thinking about whether or not vegans could pack on a substantial amount of muscle mass without eating any animal protein.

I did help the guy out, but I also ended up doing a 30 day vegan experiment of my own. I planned out a 5,000 calorie nutrition plan and a hypertrophy training plan keeping very detailed records and documenting everything on the website with articles and blog posts.

By the end of the 30 days, I ended up gaining about seven total pounds and 4.9 pounds of it according to the calculations were lean body mass and 2.1 pounds were fat mass. So, in the end it wound up being a pretty SUCESSFUL EXPERIMENT IN TERMS OF LEAN BODY MASS GAINED, and I think it surprised a lot of people.

Like I said, I documented the whole thing from body measurements, to photos, and I even took pictures of my scale when I stepped on it. It motivated us to the point that we added a plant based diet guide to our Precision Nutrition system.  I really learned a lot of great stuff about a proper vegan diet during those 30 days. In particular, vegan eaters tend to find really interesting ways of consuming more fruits, veggies, nuts, and seeds.

I found that some of the best cookbooks out there for preparing veggies were written by vegans.  It’s probably because they don’t have a choice. Basically, that’s all they eat so they have to make it taste good, and they have to make it interesting. So, it was cool and I now have a lot of great recipes with me.

In addition, as an omnivore I learned that sometimes in our quest for filling a third of our plate with animal food we forget to think about what the other two thirds should be filled with, so it’s kind of particular afterthought. Vegans will tend to eat more whole natural, locally produced unprocessed foods like nuts and seeds, whole grains like quinoa and amerance.

They usually have a locally grown bounty of fruits and vegetables and since it’s all the things that they eat, they make sure to do it right. I think a lot of meat eaters or omnivores simply think about what protein they’re having for dinner, and then they add on the other stuff.

Another lesson I learned was that vegans tend to spend more time learning about where their food comes from, so they make a point to understand the foods that come from different regions of the world, also which foods are in season during certain times of the year, and which methods are best for raising the healthiest food. So, not only is this environmentally friendly and healthy, it’s also pretty cool stuff to understand where your food comes from. I really got a lot out of that.

Then I guess the last thing was vegans also understand that carbs aren’t so bad for us when they come from a whole grain unprocessed sources when they’re used in moderation. For vegans, if you think about it, to get their proteins and fats, they usually have to go through carbs.

In order to get their protein and stuff they have to eat enough carb rich foods, so they’ve learned which carbs to eat and how much they can tolerate. That’s a great lesson for meat obsessed carb-o-phobes. I think some of us can get away with more carbs, even if the pastas and the rice have failed us in the past. The key to doing that is to go for the real grains, the unprocessed stuff.

For me the whole experiment was great. I did have some issues, especially with the high volume of food. One problem that I had was that high volume of grains and legumes, stuff like that caused some really bad stomach bloating and discomfort. I’ve since learned that I’m lectin-intolerant. Some of you may not know what lectin is, but it’s just a nutrient that’s present in things like grains and legumes that if you’re intolerant to it than it can be like lactose intolerance, it causes a lot of gas and a lot of bloating.

So, that wasn’t fun. I think there were days when I’d wake up in the morning and my waist girth was 32 inches around and by the end of the day it was 42 inches around.

John: Yeah… it as kind of funny to go “Hey, look at my pregnant belly,” but that was pretty uncomfortable.

Craig: You were wearing track pants all the time then I guess.

John: Yes, exactly. I had to. Fortunately, I work most days from home, so I can get away with it, but it was uncomfortable at times. That’s a word of caution for people who are going to try and eat 5,000 calories a day from just legumes and grains and stuff. The other thing, I don’t want to skew this too much because the minute that my vegan diet was over, I went and ate a big steak, so I’m not sort of preaching that vegans are flawless examples of great nutrition. I think there’s a lot of stuff that vegans can learn from meat eaters too.

Again, I’ve published an article on this as well over on the PN website. The whole experiment spawned four or five different articles, so for those people interested in going a little deeper they should go check them out for sure.

Craig: They can just go to Precision Nutrition.com and then use the search button?

John: Absolutely. Yes, we have a search engine on the right hand side, so if they type in “vegan” or “vegetarian” or whatever, they’ll find all the articles.

Craig: Okay. Last question on that. How did you get up to 5,000 calories? Because it is quite difficult to eat that volume of food because when you eat those foods it suppresses your appetite naturally with all the fiber in it.

John: Absolutely. Coming from sort of a bodybuilding background and having eaten as much as 7,000 or 8,000 calories in the past, 5,000 calories isn’t that big of a deal for me. So, it wasn’t actually that difficult really.

For the first little bit of my plan, it felt great because I was just eating 5,000 calories, and I felt full and I felt like I was eating a lot of great food. By the end though, with all the bloating and stuff it definitely became a problem and it was definitely something I wouldn’t have stuck with. I would have made some serious changes the next time through.

I just ate about six times a day. I had what three meals and three snacks, and three of my snacks were really nutrient dense.  I would mixture of things like oats, ground up flax seeds, oat bran, wheat bran, and stuff like that into a bowl, and I would put some dried fruits, maybe some mixed nuts, some vegan protein powder and  add almond milk or something like that and just mix it all together in this big calorie dense gruel.

So, each one of those meals  of nuts,  grains and dried fruits was about 1,000 calories, so those was 3,000 calories right there from just my snacks. Then the other three meals were something like 700 calories each. So it was pretty easy to get 5,000.

Craig: Very nice. I guess you must have just learned a lot during that course of a month about how to make some new stuff. And it must have been good that way.

John: It was. Now everyone once in a while I have a vegan day or something like that where I don’t eat any animal food for one day.  I don’t really think there’s a huge health advantage to that, but sometimes I just like it. It’s just something completely different from what I do every other day.

And again, those days it forces to make some creative things playing around with completely different flavors than I’m used to. I love that aspect of it, and I can only think having that sort of variety and enjoyment of food and diversity of food can be healthy in the long run, even if it’s just psychological health.

Tomorrow,  in part 6, lets take a look at post-workout nutrition for fat loss.