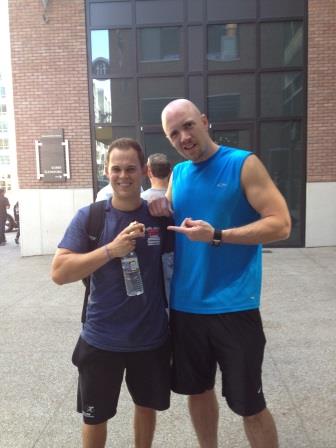 Yesterday I introduced my buddy Daniel Woodrum  (aka DWood) who is a Certified Turbulence Trainer and he runs two very successful kickboxing gyms in the Charleston area.

Today, DWood explains how density training  workouts and how he incorporates it his workout programs.

Mike: Right. I really want to talk more about this density approach because it’s really cool to see how that basically translates into better performance with your main workout. They use these on the other days and little things like that but let’s talk more about getting more in on that second round because I think this is where a lot of people realize they kind of set their potential lower than they could actually achieve. What I mean by that is, like you said, the first time they go through it they hit it three and a half times, a lot of people may think well three and a half times is as many times as I can through this circuit but then when you challenge yourself and try to get more in the next circuit, not only do you break mental barriers but obviously you’re going to break physical barriers as well.

There’s one thing I’ve noticed about density training, especially your style is the I would say the metabolic disturbance that your body gets from trying to basically just do better with every round. So I think that translates into, like I said, breaking mental barriers and that’s a huge thing and such a unique way. Not a lot of people are using this density style training but your big hook is trying to beat each round and it’s just like a fight.

Mike:     It’s just ironic that you’re using kickboxing and of course it is just like a fight. You’ve got the three minutes. Go ahead.

Daniel:     I was going to say—I’m sorry to interrupt you, Mike—that’s the exact thing and you’re not competing with anybody else. You’re competing with yourself and that’s why it’s so appealing and why it really pushes people past their limits because you’re not trying to keep up with everybody else. You’re just competing with yourself and each time you do improve that round, you go though it four times, that three at times, that’s a win for you. You’ve won that round. That’s where you’re getting more confidence moving forward and knowing that you can outdo your previous best is a very important factor.

Mike:     Right, especially when you compare it to say a normal workout routine and you have three sets of ten reps. You’re going to do ten reps and you’re going to do the same weight technically with each set whereas this one, you literally not only get better from workout to workout, you get better and better within the workout which is really exciting and I think that’s why people get such great results.

That reminds me and brings me up to my next question, using this approach, using the kickboxing and of course using the density, you’ve literally combined and kind of fused these two into this epic way of working out which is really exciting and you have something coming out that really shows people how to put these two together. Tell us a little bit more about that program.

Daniel:     Absolutely, Mike. Like I said, obviously have had some good success with these two kickboxing gyms but the problem is I can only reach the people in my area and I want to be able to take this method that I use in my gym and bring them to thousands and thousands of people across the world. I noticed the two biggest obstacles for people not being able to work out is one, lack of time, and two, lack of equipment.

So I kind of wanted to design an exercise program that could eliminate these problems and provide a solution to people who are not fortunate enough to have access to equipment and bags like I have in my gym. So what I did was I came up with a program called Total Kickboxing Revolution and what Total Kickboxing Revolution is it’s a hybrid workout of bodyweight exercises that utilizes kickboxing movements, metabolic density training, fat loss conditioning and of course we’re not talking about cardio. It even has some challenge rounds built in that will test you both mentally and physically. So your training will obviously significantly increase your fat loss. It will enhance your strength and also give you just overall athletic physique, which is what a lot of people want these days.

So kind of what it is is a three or four-day a week exercise program, depending on what phase you’re on. Like I said, it combines advanced bodyweight exercises, unique kickboxing movements without actual equipment so you don’t need to have any equipment. We all seem to have density training in a strategic way that will greatly improve fat loss.

So each workout takes less than 30 minutes, which also includes the warm up so it’s a quick and effective workout. Now I can say it can be done with minimum equipment. There are a couple of exercises that I have in the program that involve medicine balls, stability balls, light weights but I give the substitutions for all these exercises so you can literally do it with just your body so it’s great if you don’t have access to a gym. Or if you do have access gym, it’s sort of a different workout. You just do it without any equipment.

You can even do this entire workout in an elevator. It’s a funny little story. I actually got stuck in an elevator a couple of years back for about half an hour and if I would have had this workout back then, I could have literally done it in 20 minutes and not waste any of my time. The really cool thing is you don’t need any space and you can do it anywhere, in your house, your bathroom, wherever you want to do it at.
It has a fun and unique set up. Each workout has three rounds which is kind of like you said earlier, like it’s playing off the kickboxing or the boxing thing. Each round has three exercises so you must complete all three exercises for the prescribed number of reps and most of the rep ranges, they vary but most of them between 10 to 20 reps. Like I said, each round is three minutes long so you go through that as many times as you can for the three minutes and once your three minutes is up, you’re going to rest for a short time period, and you’re actually going to repeat that same round again. Like we talked about earlier, you’re going to try to outperform your previous set.

To give you another example, like we say in performance around for say three and a half times your first time through, this time your rest anywhere from say 30 to 60 seconds, depending on the phase, and the second time through you should try to complete these three exercises for four or four and a half times, beating your previous circuit. So I guess that that’s where the density part of this workout comes into play, which I think we’ll get into more, Mikey. So we’ll say we do this process for say three rounds for each workout and each workout, different rep schemes. There are also the challenge rounds that I’ve built into these that will really test you both physically and mentally so I think that’s really cool with different factors that most workouts don’t have as challenges.

The program has a four-week beginner phase, an intermediate four-week phase, and then an advanced phase. The advanced phase actually has two four-week phases. So it’s a 16-week program that takes you progressions of kickboxing and obviously builds on certain exercises. A lot of people try to worry about they’ve never done any type of kickboxing before, which is perfectly fine. A lot of the clients that I have in my gym have never done anything like this before so the program has a section where it teaches you the basic kickboxing moves so you know exactly how to properly do the kickboxing movements. They’re all fairly basic kickboxing movements so it’s something that everybody can quickly learn.

The program also has exercise instructions with pictures of each exercise so you know exactly how to perform everything. Even in the program I have a section that talks about cardio and why it’s sadly the go-to exercise for the most people.

I go into the science behind kickboxing workouts and why it’s so effective. I can provide you just a couple here with kickboxing, the big confidence booster. It helps release endorphins, which are neurotransmitters so it gives your mood a boost and it helps you feel more confident. It helps you feel happier and more positive after your workout, which is why a lot of the clients like it so much in my gym. Obviously it burns a lot of calories. I know you and I were talking earlier before the call that we solved for it and it burns up 800 calories for an hour. While these numbers might be controversial and you’ll be working out nowhere near an hour, there’s no debate that kickboxing workouts burn a lot of calories.

Maybe one of the most important facts that people might not think about is better posture. Like I said earlier, there’s a strong chance that you’re hunched over your computer all day. Kickboxing workouts will challenge many muscle groups that don’t get enough attention throughout the day so you’re going to start really building up your core. Actually your core muscles in and around your abdominal walls you’re going to be targeting with each kickboxing routine because I’ll tell you to use your hips or your waist and your abs for balance when you’re properly punching or kick. So I think there are a couple of the benefits of kickboxing movements in the workout.

That’s really the basis behind the program. Obviously there’s a lot of other great content in there. I’m trying to think what else. I even have a workout that’s called the Legend. It’s the end of the advanced phase, the last advanced phase. It’s sort of a challenge workout that I think is going to have a lot of people talking for a long time so I’m really pumped about that as well.
Mike:     You could say it will be a legend?

Daniel:     A legend, yes. That’s pretty much the gist of the program and how it all came about.

Mike:     That’s fantastic. Not only have you fused together kickboxing and bodyweight exercises because typically people are going to do one or the other. They’re either going to kickboxing classes three or four times a week or they’re on a bodyweight program but what you’ve done is actually blended them together and you’ve taken a step further than that and then used these rounds, which is so exciting it’s something so unique, so different, gets great results. So I’m glad you’re sharing it with the world because I think a lot of people are going to get a lot of value out of this. Most importantly, it’s one of the things that keep me up at night, and that is keeping people from being bored with their workouts and then quitting.

Mike: Something like this will definitely kick boredom to the curb so that’s really cool you’ve been able to do this.

We covered a lot of information here today WOW!

Daniel has so much more to share. So, join us in part 3 to hear how you can get awesome results in your grandpa’s kitchen, living room, wherever.