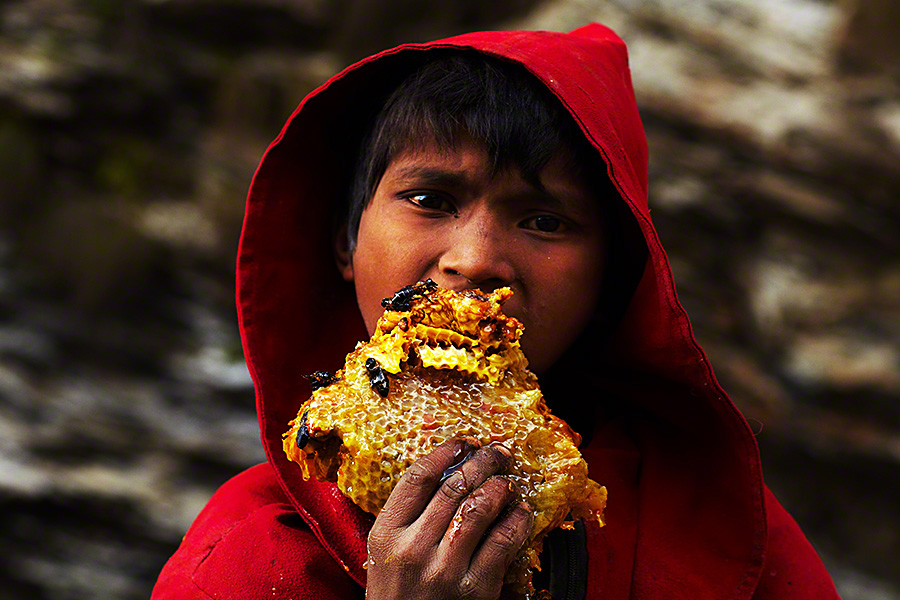 Organic Fitness: We’ve all felt the notorious “sweet tooth” rear its ugly head one time or another; whether it’s that urge to run down to the bakery to buy a doughnut, the impulse to grab just one more of those delicious pieces of cake in the cupboard, or the need to eat a couple of extra servings of dessert after dinner.

The simple explanation for these cravings is that humans have evolved a taste for sweet things. However, what we also know is that this attraction to sweet food varies from person to person, and while some people find the smell or sight of some newly baked chocolate cake completely irresistible, others have little problem staying away from these types of highly palatable foods. Some people attribute these differences simply to willpower and discipline, basically implying that folks who say they have an intense “sweet tooth” really are just mentally “weak” for letting their desires get the better of them. However, the fact is that other factors than self-control also play a very important role. This whole concept of “sugar addiction”/”sweet tooth” is very important to get to the bottom of, as one of the primary reasons people have trouble making the shift to a healthier diet is because they keep craving pastries, candy, and other sugar-laden foods.

Why are we drawn to sweet food?

It’s well-known that humans have evolved a taste for sweetness, a hard-wired mechanism that is clearly visible in affluent nations where products rich in sucrose, high-fructose corn syrup, and other sweet substances are eaten in excess. However, it’s not just the modern man who actively seeks out sweet food; this taste for sweetness has stayed with us throughout our evolution! As Dr. Richard Johnson explains in the article “Why We Love Sugar“; we have to go back millions of years to get to the root of this evolutionary adaptation:

… Johnson postulates that our earliest ancestors went through a period of significant starvation 15 million years ago in a time of global cooling. “During that time,” he said, “a mutation occurred” that increased the ape-like creatures’ sensitivity to fructose so that even small amounts were stored as fat. This adaptation was a survival mechanism: Eat fructose, decrease the likelihood you will starve to death.

The sweet taste was adaptive in other ways as well. In the brain, sugar stimulates the “feel-good” chemical dopamine. This euphoric response makes sense from an evolutionary perspective, since our hunter-gatherer ancestors predisposed to “get hooked” on sugar probably had a better chance of survival (some scientists argue that sugar is an addictive drug).

Basically, dense sources of sugar, such as honey, are a good source of energy! In an ancestral natural environment, a taste for sweetness would have helped us seek out safe and energy-dense food that increased our chances of survival.

“In the natural settings that human primate ancestors evolved in, sweetness intensity should indicate energy density, while bitterness tends to indicate toxicity. The high sweetness detection threshold and low bitterness detection threshold would have predisposed our primate ancestors to seek out sweet-tasting (and energy-dense) foods and avoid bitter-tasting foods”.

When food is relatively scarce – as it often is in the types of habitats primitive cultures inhabit – it’s only natural to seek out foods that give the most bang for the buck. That’s why hunter-gatherers prefer the most nutrient-dense parts of the animals they kill (think organ meat) and also why they often go to great lengths to acquire honey. Since periods of food shortage/fasting was a common phenomenon in the paleolithic, a “sweet tooth” would have benefitted us in the sense that it triggered us to seek out more food in times of abundance, allowing us to store fat for scarcer times.

However, there’s only one problem. Although honey, fruits, and berries have been a part of the diet of many hunter-gatherers, most estimates suggest that these foods were not plentiful in the habitat of East Africa, which is generally considered the birth place of Homo sapiens. Rather, meat and tubers were probably the main sources of calories for these paleolithic tribes. This has led some people to speculate that the taste for sweetness can also function as an “energy detector” in the sense that it primarily evolved to encourage the eating of fatty, energy-dense meats (1).

Another explanation for why we evolved a taste for sweetness is that it helped us seek out foods high in vitamin C and other essential micronutrients that are hard to obtain from animal products. 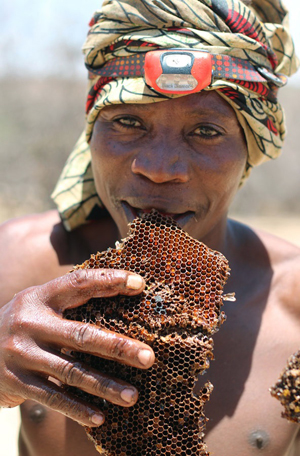 As mentioned, it’s believed that the birth place of Homo sapiens is East Africa, and some people like to use this original habitat as the basis for studying paleolithic diets. However, humans started migrating out into the rest of the world about 100.000 years ago, and it’s therefore well known that there is no such thing as a universal paleolithic diet. All hunter-gatherer diets (both prehistoric and contemporary) have certain common features, but they can be very different in terms of macronutrient composition, plant-animal subsistence ratio, etc. This is only natural, as food availability depends on climate, topography, season, and many other factors.

Honey was one of the most calorie-dense foods available to our ancient ancestors. It contains between 80 to 95% sugar, and as hunter-gatherers typically ate completely unprocessed honey, they also got a decent supply of both protein and fat from bits of bee larvae. Actually, some scientists have proposed that consumption of honey – in combination with animals source food – is what fueled the evolution of our large brains (2).

The Hadza of Northern Tanzania is a well-known example of a non-modernized culture that prize honey above all else in their diet.

Hadza acquire seven types of honey. Hadza women usually acquire honey that is close to the ground while men often climb tall baobab trees to raid the largest bee hives with stinging bees. Honey accounts for a substantial proportion of the kilocalories in the Hadza diet, especially that of Hadza men. Cross-cultural forager data reveal that in most hunter-gatherers, men acquire more honey than women but often, as with the Hadza, women do acquire some. Virtually all warm-climate foragers consume honey. Our closest living relatives, the great apes, take honey when they can. We suggest that honey has been part of the diet of our ancestors dating back to at least the earliest hominins. The earliest hominins, however, would have surely been less capable of acquiring as much honey as more recent, fully modern human hunter-gatherers (3).

Note: If you want to read more on the role honey plays in the Hadza diet, then check out this excellent article.

During certain periods of the year, honey is the primary source of calories in the Hadza diet. This might sound like a nightmare from a nutritional standpoint, but the fact is that Hadza hunter-gatherers are lean, fit, and virtually free from diseases of civilization. How can this be?

Firstly, as I’ve previously talked about, it’s definitely possible to thrive on a high-carbohydrate diet – especially if it’s just for certain periods of the year. However, this doesn’t mean that I think a high carbohydrate intake (50%+ of daily calories) is optimal, and it’s no doubt that for the overweight and metabolically deranged westerner, high-carbohydrate diets can be a nightmare.

Secondly, there’s a big difference between the wild honey hunter-gatherers eat and the sugar-laden junk food we eat in the western world. Also, as previously mentioned, since unprocessed wild honey comes with bits of bee larvae, it isn’t solely a source of sugar, but also fat and protein. Honey is a real food.

Thirdly, hunter-gatherers have a very healthy lifestyle that helps “protect” them from the high intake of glucose and fructose. They are moderately physically active (the Hadza are not as active as many other hunter-gatherers, but still more active than the typical westerner (4)), they spend plenty of time outdoors, they live in close contact with nature (“adequate” exposure to microbes), and they eat a diet that’s exclusively composed of nutritious whole foods.

However, not all hunter-gatherer tribes had/have access to a dense source of carbohydrate such as honey (Most didn’t). Generally, fruit was the sweetest food available to isolated traditional populations, and for some, even fruits/berries were absent. If you’ve eaten a fully matured mango from the grocery store or a ripe banana, then you’ll probably characterize fruit as a very sweet food. However, wild fruits are nothing like the Pink Lady apple you get at the grocery store today; they are often much smaller and have a more sour taste. So, although a contemporary paleo diet with food from the grocery store is similar to the diet of our paleolithic ancestors, it’s definitely not identical.

Okay, so I think most people will agree that from an evolutionary point of view, our attraction towards sweet food has benefitted the human species in the sense that it triggered us to seek out safe and energy-dense foods rich in certain vitamins (e.g., vitamin C) that are hard to obtain from animal products. The problem is that we’ve now created an environment where these hard-wired mechanisms not only “aren’t needed”, they work against us. Westernized foods such as pastries, soda, and candy aren’t just rich in sugar, but also other ingredients such as fat, starch, salt, and glutamate. Also, they are cheap and easily accessible. Although our food environment has changed dramatically, our physiology remains largely unchanged, and it’s therefore no surprise that so many people end up buying these highly processed products again and again.

However, while this evolutionary perspective can help explain why we enjoy sweet food, it can’t answer the following questions:

These are the questions I’m going to look into next…

All articles in this series:

Posted in Diet, Health, Nutrition, Weight Loss
This error message is only visible to WordPress admins