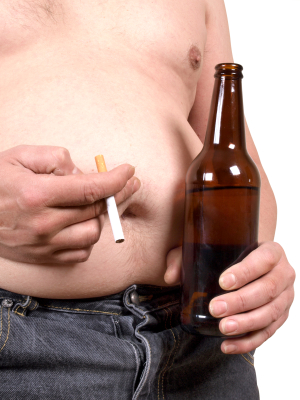 The debate was on. As we stepped out of the car at the gas station, we continued our argument.

It was a beautiful sunny morning in Colorado, and ETR Publisher Matt Smith and I had just finished our workout and started to discuss nutrition.

Each of us defended our positions, and, honestly, we were both trying to rationalize our beliefs. Eventually, it got to the point where we were arguing over the best type of fruit.

Finally, one of us realized this was nonsense. Whether you eat apples or grapes doesn’t matter. What really matters are the basics, not the minutiae of your menu.

In fact, there are many, many useless debates in the health and fitness world and few that really matter.

You see, there are really only Four Horsemen of your body’s apocalypse, only four simple factors you must control if you want to live a long and healthy life. Fortunately, they’re not that difficult to avoid.

The great news is that this short list will ease the process of designing your healthy lifestyle. You won’t have to get stressed about the infinite nutrition debates on whether it’s okay to “eat this, not that”. Just make sure you avoid these four factors, and you’ll increase your potential of living a long and happy life.

The first horseman of your body’s apocalypse is smoking.

Seriously, people still do this?

Unfortunately, the answer is yes, and this is one of the worst things you can do for your health.

However, smokers also teach us something about why so many “great health debates” are pointless drivel.

Smokers are inhaling poisonous gasses into their lungs repeatedly on a daily basis, and, according to research from Oxford University, this cuts a smoker’s lifespan by only ten years. Imagine that. You’ll only lose ten years off your life from inhaling smoke directly into your lungs on a daily basis for over 35 years.

It makes our argument about the best type of fruit look silly, and it is.

If you smoke, please try to stop. And never, ever, ever give up on trying to quit. It may take many attempts, but you can do it. That might be the hardest horseman to beat, but the second one isn’t easy either.

That second horseman of your body’s apocalypse is excessive alcohol intake.

This horseman killed my father and for that I would like to whip this horseman’s butt. But alas, I cannot.

But, perhaps, I can spare your child a lot of pain and misery by convincing YOU to take a good look at your own alcohol intake. Alcohol is the third leading cause of preventable death in the United States (with smoking and obesity ranking first and second).

The bad news is that it’s really easy to drink excessively. Many casual drinkers, who certainly wouldn’t consider themselves alcoholics, could be doing damage to their bodies. Research suggests that more than two drinks per day for a man, and one for a woman, will add up into health problems over time. Binge drinking – six drinks or more in a single session – is even worse.

My father, who drank much more than two beers per day for thirty years, died prematurely at 69 years old. Who doesn’t hit 70 years old in Canada in this day and age?

Don’t make the same mistakes he did. Please. You know the facts. Make the right decision.

Today, all over the world, this is probably the most popular destructive horseman of the four. It’s such a shame, but businesses are rewarded for creating conditions that lead to obesity. And it’s been tough to change. Levels of obesity have not shrunk despite a much greater awareness of the problem. Worse, children as young as three years old are being diagnosed with type-2 diabetes due to childhood obesity.

Fortunately, I believe obesity is still easier to overcome than an addiction like cigarettes and alcohol. However, while cigarettes and alcohol are thought of as ‘more evil’ than simple obesity, a recent study from the journal “Health Affairs” concluded:
“Obesity appears to have a stronger association with the occurrence of chronic medical conditions, reduced health-related quality of life, and increased health care and medication spending than smoking or problem drinking has. Only 20 years’ aging has similar-size effects.”

Did you catch that message?

The author concluded that if you’re obese, then you have the health of someone twenty years older than your current biological age. So if you’re a 55 year old obese individual, you’re living with the body of a 75 year old. (And surely not a fit 75 year old.)

That’s what makes this Horseman so dangerous. You might not be buying socially unacceptable items like cigarettes and alcohol, but your body is losing an important fight if you’re obese.

Diet is your sword against this enemy, and exercise is your shield.

Take up your weapons and fight him. I’ll be right by your side.

You’ll need me, because the fourth Horseman of your body’s apocalypse often fights in tandem with his partner.

The fourth horseman of your body’s apocalypse is a lack of exercise.

Ever so cunning, the fourth Horseman is thought to be innocuous.

What’s the big deal, right? You don’t struggle with cigarettes, booze, or obesity, so why should you worry about exercise, right?

That’s exactly what this Horseman wants you to think. You’ll let your guard down and then… Wham!

The deadly powers of the 4th Horseman are rarely noticed until it’s too late.

Perhaps your slim mother may have gone 75 years without health issues, but because of her lack of exercise – a lack of strength training in particular – she soon loses her ability to perform daily tasks. One day, balance, which is determined predominantly by strength, fails her, and she tumbles. A broken hip is nearly impossible to overcome.

A little strength training done on a consistent basis will mean so much to us in the future. Take up exercise as your sword today, because it’s never too late at any age.

As you can see, the four Horseman of your body’s apocalypse are serious enemies. Fortunately, these Four Horsemen can be avoided with a simple, healthy lifestyle. I urge you, if you’re fighting with any of these Horsemen, to get weapons and support for your battle.

You CAN beat them. You CAN win. You CAN live a long and healthy life without massive sacrifices.

Let us fight these enemies together.

[Ed. Note. Craig Ballantyne is the Editor of EarlytoRise.com and Financial Independence Monthly. He also coaches executives of companies with sales over $1 million. Later this summer, Matt Smith and Craig will be offering a new virtual private mentoring program for Financial Independence Monthly subscribers.]
Posted in Anti-Aging, Fitness, Health, Nutrition and tagged alcohol, Diet, Exercise, health, smoking
This error message is only visible to WordPress admins