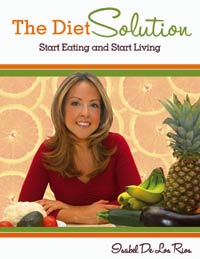 Last day, Isabel De Los Rios shared some of her personal nutrition habits that helped transform her body and keep it looking lean and sexy, even after having kids!

As we continue with the expert interview, today Isabel solves the mystery behind complex carbs – specifically when and how much you should eat them, depending on your workout goals.

Craig Ballantyne:  Now what you about your general first three steps to change for someone who is new to all this.

So, for someone who is really kind of in the beginners’ stage. What are kind of some basics? It could be two; it could be five, what are the basic steps to change right now?

Isabel De Los Rios: I think when you’re going to start you’ve got to start with a decision.

I already talked about the decision, so make up your mind you’re going to do this no matter what, because if you don’t want to continue your life where you are right now you’ve got to decide to try something else.

If you choose one to two things every three weeks before you know it you’re going to have such a healthy regimen. You won’t have over whelmed yourself; it won’t have been torture to make those changes.

Craig Ballantyne: Now, would you cap a limit as to how many things you put into those 21 days? Is one enough or can you do two or three?

Isabel De Los Rios: I used to think, “Just limit yourself to two,” but it really is just specific to certain people’s personalities. Just with meeting so many different clients, I’ve realized that. People are just different.

For me, to be honest, I couldn’t have done all the changes at once, it’s just not me. I needed to do the transition slowly. Other people, I’ve had clients be extremely successful, I mean they just revamped their life. I never recommend revamping your whole life, but for whatever reason that worked for them. They were just happy to completely clean out their kitchens and start from scratch.

So, you have to BE REALISTIC with your personality.

Craig Ballantyne: Very nicely said. Okay. Then here is where we are going to flip that question upside down. What are the three last steps that people focus on? You can kind of answer this one if you want maybe the three steps that people try and focus on too early? Kind of what you talked about with the fish oil stuff. So, maybe some of the three more advanced changes.

Isabel De Los Rios: The real advanced ones again, are the supplements. It’s just that I see that mistake all the time and people really getting hung up on “Should I take this, should I take that?” So, that is definitely one.

The other one is worrying too much about the details of their exercise program. By that I’m not talking about making a plan, I completely agree, I cannot walk into a workout without a plan, but people will drive themselves crazy with the sets and the reps and exactly how it needs to be.

Half of the time that paralyzes them, because they’re worrying about the details and the numbers so much that their paralyzed by it. Just establish a workout routine that you enjoy and don’t get so hung up on the numbers.

So, those are what I would say are the last steps to changes and those are the biggest mistakes that I see, getting paralyzed by analyzing your workouts and the supplements.

Craig Ballantyne: Very nice. Okay. Now, let’s talk about some post work out recommendations for fat loss, because it’s kind of a tricky subject when you are working with people who are super lean compared to people who are beginners and maybe have a hundred pounds to lose. So, what are your recommendations and to they vary between genders and abilities?

Isabel De Los Rios: I find that if you’re on a fat loss program, and that’s your primary goal, you want the post-workout to be the ONLY time you are having complex carbs. There are a lot of complex carbs that I think are phenomenal foods, sweet potatoes, brown rice, quinoa, millet, things like that.

I’m not saying that they are bad foods but if you’re really trying to lean down, even when you are in the last few pounds, make this the only time that you are having those complex carbs. Use about a one to one ratio of protein to carbs. So, if you’re going to have 30 grams of protein have 30 grams of carbs. It’s not that much post-workout.

So, you’ve got to pay attention to how your body feels. You might need to bring it up a little bit, maybe a one to one and a half or a one to two. But, that’s really the only time you want to do complex carbs and you want to keep it to a fairly low number.

Now, with that being said if you start to drag, you start to feel fatigued, if your workouts are suffering, then you have brought it down too low and you need to bring it up a little bit. So, you have to pay careful attention to that.

Craig Ballantyne: Very cool. So, did we cover the beginner aspect to there? Let’s say, for a woman who wants to lose 100 pounds, what does she need to do after training? Is it the same as a person that only wants to lose a few pounds?

Isabel De Los Rios: At that point, you don’t need to get too hung up with the numbers. I would say the primary goal there is to make sure that you’re not feeling fatigued, so that you are having enough carbs.

A one to one ratio would still be fine there, but that person really needs to pay attention to their body pretty closely and make sure that their workouts are not suffering. But, the same rules apply. If you’re not feeling good, if you’re not feeling rejuvenated from what you’re eating after your workout, put some more carbs in there.

Putting in more carbs doesn’t mean you have to put in more complex carbs, because you can have some chicken, some brown rice and then when you are done with that have an apple or have a banana. You can use fruit and vegetables as well.

Craig Ballantyne: Great. Okay, now, what about for muscle? When you’re talking to someone who wants to gain muscle do you change their post work out meals at all?

Isabel De Los Rios: Well, there what you’re going to do is you are going to change the ratio. If your primary goal is to build muscle you want to stick to the same foods. The same food applies to everyone it is just how you manipulate those foods.

Here we are going to talk about a more one to four ratio. You do have the ability to have more complex carbs there. So, one to four would be 25 grams of protein and 100 grams of carbs. You really want to fuel your muscles so that they break down and they grow bigger and stronger.

So, the food isn’t necessarily different it’s just the ratio that is different. For people that are trying to build muscle, men and women, I usually recommend a one to four ratios.

Milk, grains, and organic food shopping – each of these topics can get pretty controversial, but let’s find out the experts take on them in part 4 and how you can work her tips into your fat loss plan.