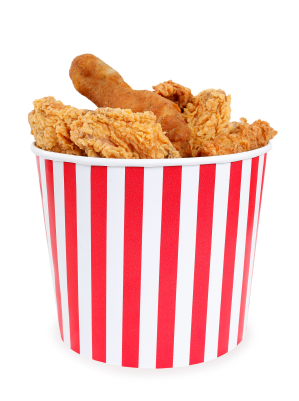 Several years back there was a woman in my fat loss membership site who had a fried chicken problem. Each day on her way home from work she would pass a shop, and no matter whether she needed it or not, she would stop in and buy a piece of fried chicken to eat before dinner.

As you can imagine, this had disastrous consequences for her health and fitness. “What can I do to break out of this bad habit?” she asked in despair. At the time, she felt like there was nothing she could do. In her mind, she was “the type of person that couldn’t pass the fried chicken shop without going in.” That was her self-identity caused by her self-beliefs.

Changing her beliefs would be the turning point towards kicking the fried chicken habit and improving her health and fitness. The solution didn’t involve sacrifice. Instead, it involved self-growth.

My advice to her was to read a book that has sold over 30 million copies since it was first published back in the 1960s. Perhaps, as a student of personal development, you’ve read it too. You might even have a dog-eared copy of it on your bookshelf. I know I do.

The book is Dr. Maxwell Maltz’s oddly named guide to changing your beliefs called,Psycho-Cybernetics. I first heard of it from my friend Matt Furey, and later from marketing guru, Dan Kennedy. It was in 2006 when I first studied this book and put it to practice, changing some of my own beliefs. It played a key role in helping me have my best year ever in business.

Dr. Maltz first stumbled across the power of limiting self-beliefs in his surgery practice. His patients claimed that if he could only fix their physical “deformity” then it would change their confidence and their behaviors, and therefore, their lot in life.

But what Dr. Maltz found was that physical change did not cause psychological change. After surgery, most of his patients still had the same limiting self-beliefs, thought patterns, and habits. It was only when Dr. Maltz began working with people to change their beliefs about themselves that his patients actually made progress in changing their lives.

Dr. Maltz’s advice works for everyone.

It starts with creating Golden Rules for your life. And one of those rules needs to be what you believe about yourself.

If you believe “nothing ever works for you,” then guess what? Nothing will ever work for you.

But if you make a rule that “You are the type of person that takes action, stays persistent, and always finds a way to succeed,” then guess what? You’re going to have a lot more success stories in your life, starting now.

Don’t wait on creating rules for your life. You need these in place to move ahead and to overcome the obstacles in your way.

As Dave Kekich says in Kekich Credo 89, “Unattended problems will not go away, but will usually get worse. Anticipate and avoid problems — or meet them head on at the outset. Overcome fear by attacking it.”

If you want to lose fat, get out of debt, stop smoking, eliminate curse words from your vocabulary, or even simply start getting out of bed on time, your need to put your new rules in place to change how you see yourself.

You must go from saying, “Oh, I can never wake up on time,” to “I’m the type of person who gets up as soon as the alarm goes off. No hitting the snooze button for me.”

And you must truly believe in your new self-identity. This is no time for the “fake it ’til you make it” approach. But that’s not as hard as it sounds. After all, there have been days when you’ve bounced right up out of bed with the first beep of your alarm, right? There have even been days where you’ve woken up fresh and alert before your alarm even had the chance to go off. You know you can do it. Now it’s just time to turn that knowledge into a new identity for yourself.

That’s the first step in making a dramatic change in your habits.

“Whatever the mind of man can conceive and believe, it can achieve,” said Napoleon Hill years before Dr. Maltz’s book. And while most people take this to mean the accumulation of great wealth and prosperity, it can just as well refer to cutting out the visit to the fried chicken shop, eliminating cigarettes from your life, or getting up on time each morning.

Once we do that, once we truly believe we are capable of better behavior, that’s the impetus for all habit change. That’s when all of those other physiological tips and tricks actually start to work.

As did the woman from my membership site with the friend chicken problem. She simply changed her belief from, “I can’t stop getting fried chicken,” to “I’m not the type of person that eats fried chicken before dinner.” She truly believed this because she knew there were days in the past where she had succeeded with this behavior. And so she was able to change. She was able to kick the bad habit and start a better behavior.

It all started with her belief in herself. And that’s where your better behaviors will start, too.