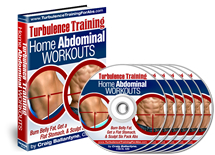 st day fitness expert, Nick Nilsson introduced us to his unique method of running. It seems a bit unusual, but that’s what the Mad Scientist is known for – creating unique ways to gain muscle and burn fat. So head back and check it out!

Today, Nilsson shares more of his funky and super effective exercises that will strengthen your upper body without aggravating previous workout injuries….

Craig Ballantyne: We’ve talked about the dumbbell chest press you’ve changed. What about differences in some bench pressing stuff that you’ve done? With the thought that some people can end up with ruined shoulders with bench pressing, is there a way that you still get a great chest workout from bench press with less stress on your shoulders? Have you done anything that way?

Nick Nilsson: Actually, yes. If you have access to a cable machine or at least some elastic bands, I’ve got one that’s just going to set your pecs on fire.

Nick Nilsson: Think about two low pulleys and a cable crossover machine. You put a bench or a ball right in between, and you’ve got a couple of dumbbells set up. You’re basically going to be combining two forms of resistance into one exercise….

I like to use ankle straps on these low pulleys. Basically, you attach these ankles straps to your forearms. You can also do this by holding the dumbbell and the cable handle in one hand too. But, you’re going to be doing a dumbbell bench press AND a cable fly at the SAME TIME.

So, as you’re bringing the dumbbells in, and together you’re getting the direct resistance inwards from the cables. You can mimic that with the bands as well by tying them onto two things directly out of the sides.

Just combining those two forms of resistance basically keeps tension on the pecks for the entire movement; they get no rest at all. I find that to be not only easy on the shoulders, but extraordinarily effective for the chest.

Craig Ballantyne: Very good. Anything else you want to mention about chest exercises before we move on to a different body part?

Nick Nilsson: One of the things I’ve also found if you’re interested in building a bigger bench is partial training. For me, the bottom of the bench is the spot that’s hardest on my shoulders. I can do lockouts with very substantial weight without many problems.

Just loading your connective tissue like that really can increase your overall full range of motion bench press too without hitting your shoulders so much in the more vulnerable bottom position.

A few years ago when I started doing partial training I was stuck at 300 pounds on my bench and just couldn’t get past that plateau until I realized it wasn’t the muscle that was lacking in strength, it was more the connective tissue.

So, by doing the partials for about six weeks I actually managed to bump my bench up to 350 just by doing that. I found that to be one trick that really works every time for people.

Craig Ballantyne: Okay, very good. Now we’re going to go and train our upper back, because we want to work on that to counter all the pressing that we’ve talked about so far.

Nick Nilsson: Oh, yes. It’s critically important to do to balance that out, like you’re saying. One of my favorite back exercises, and this is a great one if you find you have trouble feeling your back working, is what I call decline pullovers/pulldowns.

Basically, you take a low pulley, and you can do this sort of with a dumbbell, but it’s going to be easier with the pulley. You put the decline bench so your head is down by the pulley, and you reach back and you use the V-bar or a straight bar. Then just like you’re in a dumbbell decline bench press position you do a kind of a pull down movement.

It kind of doubles as a pullover movement, so it keeps the tension on and forces that tension onto your lats the whole way through. I’ve seen pretty incredible results with that one too. It really lights up the lats pretty good.

Craig Ballantyne: Okay, very nice. What about bodyweight exercises? What do we have for upper body bodyweight stuff that you’re doing different?

Nick Nilsson: Chin-ups. I’ve got a ton of different VARIATIONS on chin ups and pull-ups. I can give you one of my very favorite chin up variations.

Nick Nilsson: All you need is a chin-up bar for this one. Instead of gripping so that you’re facing the bar you want to grip it so it’s kind of like an alternating grip, you’re right directly perpendicular underneath the bar. Does that make sense?

What that does is for part of that movement you’re supporting your entire bodyweight just on one arm for a brief moment and pulling yourself back up. You walk back and forth down the bar a couple of times like that alternating your hands, and I can promise you that you’ll feel your back for days after that.

Craig Ballantyne: Very interesting. Any pushup variations that we didn’t get around to talking about during the chest part? Anything to make pushups harder? Most people are topping out when they’re able to do 50 pushups or 30 decline pushups, and they need something a little more advanced.

Nick Nilsson: Actually, I do have one that you can do if you’ve got a chair, a bench, or even a step. It’s kind of like a one arm pushup, but your other nonworking arm is held straight out and supported on that raised object, like a bench or a low stair or something.

You’re just doing a one arm pushup, but because you’re supporting yourself on the other arm too isometrically it’s NOT a triceps exercise like the usual one arm pushup is. So, you can hold your body in that pushup position, but use just one arm and give the pushup a lot more resistance that way.

Craig Ballantyne: Okay. Interesting. We should really hit some abs stuff now. You’ve talked about the dumbbell one, what else do we have?

Nick Nilsson: I’ve got so many abs exercises. I just come up with these things almost every day. My favorite one can be done with dumbbells or barbell. It’s called a Curl Squat. You hold the top of a curl, and then you squat. It’s just that easy.

If you’ve done a front squat you kind of know how that hits the entire front portion of your core as well as your legs. This basically takes more of that skeletal support away from the exercise and puts it more on the core, so you can’t use as much weight, but it all goes directly right into the core.

For me, I’ve found this exercise to be just incredible for building up my squat strength, because it’s the core that kind of holds me back when I’m doing heavy squatting. That’s where I feel it most, my back doesn’t bother me, my leg is fine, glutes are fine, it’s just supporting the weight through the core.

So, by doing this exercise where very simply you’re just holding the top of that curl, and you’re squatting up and down it really develops that specific strength for increasing your squat fast.

Craig Ballantyne: Very nice. Bodyweight ab exercise that people can do with no equipment? Maybe like for in a hotel room or something, anything there?

Nick Nilsson: Absolutely. I’ve got a ton of those too. One of my favorite ones for that is what I call a side ab pushup. If you think like a side plank, only you’re not resting on your forearm, you’re resting on your arm straight down below you.

Now, kind of let your hip go down towards the floor. Now, using your side ab strength directly bring your hip directly straight up in the air until your body is kind of at an angle. Just repeat that where you’re keeping your body in the vertical plane, but sideways like a side plank and you’re just moving your hips up and down by contracting your abs.

That one is just an incredible one for tightening up the entire oblique area. The first time I did it I was sore for two days after that and that was just with bodyweight.

Craig Ballantyne: Impressive stuff. What are some of the best resources to get these exercises? Do you have most of them on video or do you have them in manual too?

Nick Nilsson: I’ve got them all on my sites actually. Fitness-ebooks.com is where I sell the ebooks for that. I have a membership site where I brain dump all this stuff every other day. I’ve got almost 650 pages of these things on there. That’s at PowerfulTrainingSecrets.com. I think I’ve got 65 pages of free samples on there too.

There’s a lot of crazy stuff out there that you can try and a lot of it is good bodyweight stuff. I tend to stick to more of the free weights stuff myself too. I know a lot of people are more interested in the free weight and the bodyweight stuff and I’m right with you on that, because the machines can be okay, but they shouldn’t be the focus of your training.