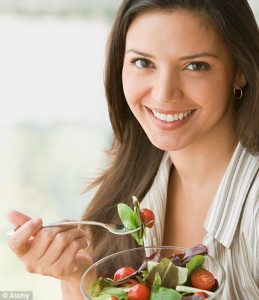 Momma was right – it’s good to eat your greens!

Many of you know that fitness alone doesn’t give you those ripped, sexy abs.  Instead, combining a resistance program AND following a healthy diet are both essential ingredients for achieving a body that you just can’t wait to show off.

In last day’s Scott Colby interview, I gave you the precise fat loss formula to increase your metabolism, as well as some good reasons why you want to stay active on your days off, but today I want to share some of my nutrition advice that is so simple AND will make a huge difference in your waist line.

Craig Ballantyne: Now, with nutrition I want to keep things as SIMPLE as possible.

With the workout stuff, it was very simple, three quick workouts, resistance and interval training. Nothing super fancy, just basic exercises, very important. So, with the nutrition we also want to keep the same sort of mentality. We want to keep it simple.

I call my approach the Simple Nutrition approach…

…basing your diet on raw or cooked fruits and vegetables as well as some raw nuts.

You should have an ounce or two of raw nuts per day as your snacks in between meals. It’s a large volume of food because it’s low calorie, high nutrient, and fiber rich foods. That’s the basis of your diet.

Then from there you can add dairy or meat if you want to, but again, you’re going to get MOST of your calories from most of your satisfying foods, fruits and vegetables, add some grains if you want. 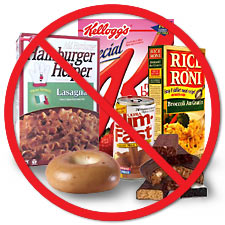 If you have that foundation you’re generally not going to over eat your calories, so you don’t have to be very obsessive compulsive about counting your calories. You have to just AVOID processed foods, foods in a bag or a box. Really that’s about it.

It doesn’t matter if you space your meals out to six, five, four, or three meals. You just have to find what suits YOUR personality and YOUR schedule. That’s just as important, as opposed to force feeding yourself or forcing yourself to stick to a schedule.

I’m not someone who says you have to eat breakfast as soon as you get up, because if someone is not hungry they force themselves calories. This will get in the way of their daily calories intake.

So, we DON’T want to OVERDO that mentality of getting the multiple meals in.

Although, I will agree with most people who believe that multiple meals are better, but again, only if it suits your personality and your schedule. It’s not something that has to be forced into your lifestyle. That’s important to understand.

Really, the bottom line is that simple nutrition aspect of eating simple foods, one ingredient foods, which is really just making sure that you’re

not eating with added chemicals and a laundry list of ingredients, first and foremost.

Obviously, you’re going to get in some stuff, like if you eat a couple of slices of bread per day you’re probably going to get into something that has five ingredients there.

A very good simple book for nutrition, is called “Food Rules” by Michael Pollan. I based a lot of my stuff off his and also the research. He’s just really articulated it very well.

He has what I call the SEVEN WORD DIET, which is, “Eat food, not too much, mostly plants.” You really can’t break nutrition down into anything better than those seven words. When he says food he means REAL food, not meal replacements out of a package, or Lean Cuisine stuff. That’s NOT really food, this stuff has been processed and rendered.

Then, not too much, which couldn’t be any simpler. Don’t eat too much. Then mostly plants, you really want to focus on the plant aspect.

Again, what I call my simple nutrition is the fat loss foundation of fruits, vegetables, and raw nuts. Hopefully, you’ll agree, a simple way of looking at losing fat.

Then there are just some details that we have to get into in terms of what a person’s individual diet is going to be, but that’s pretty much it.

Scott Colby: That’s really awesome, Craig, and a great overview of your workout and diet philosophy. The reason I like talking to you and interviewing you is because I share most, if not all of the same philosophies as you.

I try to break things down really simple to my readers and listeners with their workouts, doing a lot of body weight stuff, working out your body the way it’s meant to move with some pretty good intensity, including resistance training and interval training. 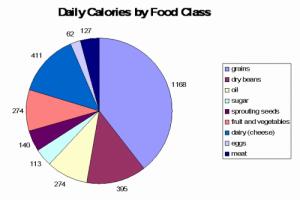 Of course, the diet is where I think a lot of people get hung up on different rules. I know you agree with me as far as keeping things simple. It’s funny, we were both speaking at Joel Marion’s Transformation Domination conference recently and I gave a whole talk on workouts, but I gave one diet tip at the end….

…I said, “I know you’ve heard a lot of great talks from the dieticians here, but here’s my simple tip for you.

“Count your ingredients not your calories.”

The take home message of that really resonated with a lot of people. A lot of people even commented about that simple diet tip more than my entire workout presentation, because it was a way to look at eating that they had never thought about. So, that’s why I really like your simple nutrition plans.

We all know fruits are GOOD for you, but do you know why they are good for you? In part 3,  you will read about my  philosophy on fruit.