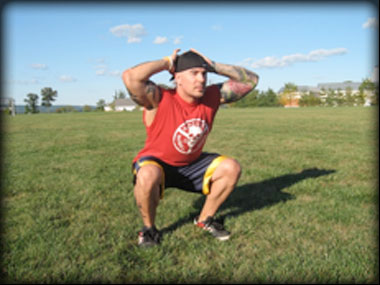 In part 1, Jason Ferruggia shared with us a few lessons from his recent Renegade seminar.

Today, this fitness expert talks about the countless mobility drills and flexibility exercises that help his clients become a better athlete.

CRAIG BALLANTYNE: All right, nice.  Tell us a little bit about the seminar you did, and how that went down.

JAY FERRUGGIA: I explained it more in detail, because we don’t have much time obviously, all the changes that I’ve made this year and stuff like that, and mistakes, whatnot.  And then basically we had about 20 people fly in from all over the country and Canada.

Most of it was hands-on, because I didn’t want to make it a thing where I was standing there speaking for hours on end.  So we went through all this stuff.  We spent a good hour or so on mobility drills.  And a lot of people found it very eye-opening.  Some people said it was their favorite part just because I think most of us, everyone wants to go in and rest.  Who wants to do mobility?  But that’s the kind of stuff that’s probably the most important stuff.

I used examples of people in the room and myself.  If we were going to start playing a sport or get a tryout with a team right now, there are a lot of guys there that compete in strongman and they’re a lot stronger than I’ve ever been.  And even myself, what would help the most?  Some of these guys could barely touch their knees.  So that mobility and flexibility would help them become a better athlete.  And even me really, that would make a bigger difference for me.  It has made a bigger difference for me than just getting stronger at this point.

So we went all through the benefits of mobility and tons of mobility drills from head to toe.  We did every joint.  We probably did a couple different drills for every joint, and when to do them and whatnot and the optimum volume.  We did the same thing with flexibility.  A couple different unique ways of stretching.  Kind of a stretch wave type deal that Ann Fredericks teaches, and went through some PNF stuff, some static stuff, when to do those.  So we spent a good hour or so on that as well.

Let me think what else we did here.  And then basically we did all the big lifts, because a lot of those guys were trainers so they need to know how to coach the bench, even though we don’t tend to use the flat bench press a lot.  We went through the whole setup and all that.  And then just basically all upper and lower body power exercises, plyo pushups, medicine ball stuff, jumps, a number of those.  And then assistance work and progressions on some bodyweight exercises.  Like progressions for one-arm pushups, front levers, stuff like that.

CRAIG BALLANTYNE:  So that seminar was in Jersey, right?  But you live out in California now.  Where are you training out there?

JAY FERRUGGIA: A lot of days I actually train at the rings, Muscle Beach.  And then there’s another gym nearby, which is pretty good.  It has most stuff.  And then we live about a block or so from Gold’s Venice, which Jen is training there now.  I might go there for a little bit.  That will just be to hold me over until we eventually get a place going out here, which I guess will be sometime next year.

CRAIG BALLANTYNE:  And Jen is still stronger, fitter and better looking than you.

JAY FERRUGGIA: Yeah, everyone is.

CRAIG BALLANTYNE:  So all this stuff you learned.  And you got smarter this year.  Have you put together some programs at all this year, some new good stuff?

JAY FERRUGGIA: Yeah.  Uncaged actually did a very popular program, which has a lot of the progressions that I was talking about.  I was more of a West side guy back in the days.  Not that there’s anything wrong with that.

Obviously, you can’t argue with the results.  But just for the clientele I had and the certain things I wanted to do, we kind of backed off always working up to a heavy one RM.  But now I cycle the most strength work, the big exercises, a little differently.  So we have that.   Uncaged has that kind of progression in there, as well as there’s probably about three to five different unique bodyweight exercises that take you through a 16-week progression on those.

First of all, my membership group has been changing.  Not changing, but bringing out more and more new programs.  We’re going to have a new one coming up here in two weeks, January 1st, which will incorporate all the kind of stuff we just discussed with unique periodization schemes and progressions and all that.

Join us in part 3, where Jason will give an example of his training techniques.