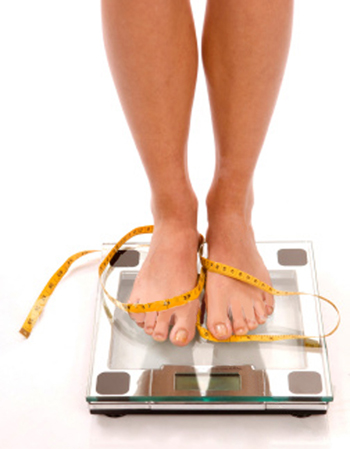 We’re moving right along to part 4 of my interview with abs expert, Scott Colby.  If you’ve been following along with us, then you’ve most likely noticed a heavy emphasis on nutrition.  But the reason for this is simple; no matter how hard you workout, you will never be able to out-train a bad diet.

With that being said, if you incorporate small, daily dietary changes into your lifestyle, such as what I suggested in part 3, you will notice significant results.

So, let’s not waste a minute more and jump into today’s question regarding low-cal diets…

Scott Colby: Let’s move on to Donna out in Sacramento says, “I want to lose at least 40 pounds.  I’m currently allowing myself 1,355 calories per day based on the Harris Benedict equation.  My starting weight was 195 pounds, and I’ve lost about 5 pounds, although those 5 pounds seem to fluctuate from day to day.  I think I need a new scale.  I’m thinking of cutting my calories back even more.

“Is it safe for a woman at my age – 58 – to go as low as 1,000 calories per day? And will I have to stay at that low calorie level or lower the rest of my life to maintain? I’m also doing cardio in the form of StairClimber and weight training in the form of BowFlex and free weights three to five days a week.”  She wants to know if she needs to go on a really low calorie diet.

Craig Ballantyne: Well, I think what we’ve covered so far in so many of the questions is really gonna help her out.

I think the BEST APPROACH for her would be to write down everything that she’s eating.  Figure out how many calories she really is consuming, just to make sure that she’s not consuming more than she thinks.  And then to go through all those diet improvements, quality improvements. Can we eat fruits or vegetables instead of anything from a bag or a box?  When can we do that?  When can we make those substitutions?

And if we can improve the quality of the diet a lot, then spend a couple days on that – see if we aren’t getting more results.

Then take a look at the calories again and see if we really need to go as low as 1,355 calories per day.  I certainly think that’s pretty LOW, and I am certainly NOT going to tell her to go down to 1,000.

But I think that improving the quality of the diet will NATURALLY DECREASE THE CALORIE INTAKE, but at the same time NOT DECREASE THE ENERGY of the person who’s consuming that diet.

You just feel better when you’re eating those types of foods, and that’s where I would start.  So I think if she used that equation that we mentioned with the ideal body weight, it would probably give her a relatively high calorie intake compared to what she’s consuming now, so it would really confuse her to do that.

And that’s why I said use that simple three-step system:

So that’s what I would do, and generally it sounds like her workouts are on track.

Staying active on the off-days, as mentioned in our previous question – I mean you always have to be doing something.  It just doesn’t have to be hard, intense exercise.  You wanna recover on those days, but you NEED TO STAY ACTIVE and stay mobile, and that sounds like she’s getting a pretty good workout plan.

Again, we’d have to see a lot more details to double-check on that, but I think hopefully we’ve helped solve her nutrition problem there.

Scott Colby: Awesome.  And Craig, that FORMULA that you gave earlier, is that the same for men and women?

Craig Ballantyne: It is, actually, yeah.

And the weird thing is some people took a look at it and were not very happy by it; they thought it was way too much.  And then we had both men and women, and both men and women also said, “Hey, this works out perfectly for me,” and so we got very mixed feedback on that.  And I’m gonna email you the link right now and you can share with everybody.  It’s on my blog, and I’ve included a men’s and women’s example.

Now that you have the formula for calorie consumption, find out the formula that is spurring people to take action and get results in part 5 of the interview.