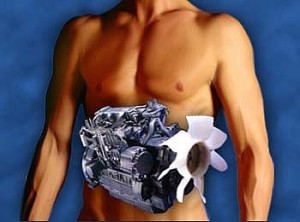 Over the past few days, Brad Pilon, author of Eat Stop Eat, has been blowing the lid off the rampant dieting and nutrition myths that exist out there. Here’s part 1, 2, and 3 if you’ve missed them.

Today we’re going to look at all the hogwash surrounding our metabolism. From the importance or lack thereof for breakfast, to missing meals, to what really ramps up your metabolism – Brad gives us the straight goods. Let’s get into it….

Craig Ballantyne:    So let’s move into the next section.  We’re gonna talk about some of the METABOLSIM MYTHS.

So, the other day, I was on – I think I was on MSN.com, and they linked to an article that said, “Five Ways to Boost Your Metabolism,” and it was from Prevention magazine, I think….

And the first thing was you have to eat breakfast.  And then it went on to say how people, in that one study by James Hill, showed that people who eat breakfast have a better chance of keeping weight off long term.  And they don’t talk anything about metabolism, and I realize that NO ONE’S  EVER SHOWN that eating breakfast boosts your metabolism.  Is that right?

Brad Pilon: Yeah, I would consider that to be correct.

The importance of BREAKFAST is perfect for that.  There is some research on breakfast and cognition on children at school.  So, by all means, if you’re on this call and you’re 8 years old, you should probably be having breakfast before you go to school.

For the rest of us, again, it doesn’t have an effect on boosting your metabolism.  It really does not have an effect on your cognition except if you’re fretting over the fact that you missed breakfast and sort of letting it play mind games on you.

And in reality, we have to consider the fact that breakfast by and large is a fairly NEW PHENOMENON.

In terms of the meals that we have in North America, it’s actually one of the more recent ones.  It used to be kind of a late brunch that we had and sort of an even later dinner.  But breakfast was invented when we became industrialized and had to go to work at 9:00 and so we ate beforehand.

So, I wouldn’t ever worry about ever eating breakfast to boost your metabolism because it’s simply not doin’ it.

Craig Ballantyne:    And then carrying on with that is there any research that shows that skipping a single meal or even several meals slows your metabolism?

Brad Pilon: If 72 hours without foot doesn’t slow down your metabolic rate, I have no clue why skipping 1 meal would.

I mean, you can go 72 hours straight and your resting metabolic rate doesn’t change.  And as long as you’re

moving around the same amount you’d normally move around, your total energy expenditure, the amount of calories you burn on a given day, doesn’t change.

Craig Ballantyne:    Yeah, perfect.  And that goes back to forcing the meals.  Like, someone wakes up and they’re not hungry, do they really need to force breakfast into their daily pattern?

Brad Pilon: Absolutely.  And that’s when we start getting into a very bad relationship with food, is all of a sudden food’s an adversary, right.

You’re being FORCED TO EAT it when you don’t want to, then you’re NOT BEING ALLOWED TO EAT when you want to, so you really hate eating breakfast but you eat breakfast ‘cause it’s good for you.  And then you really wanna have a snack before bed but you don’t because you’re not supposed to eat after 7:00.

And it just becomes all of a sudden your relation – it’s not really a relationship because food can’t like you back.  But the way you interact with food becomes so DAMAGED that you just don’t know what to do anymore, right, ‘cause everything you’re doing was – at some point, someone wrote a book somewhere where no matter how you like to eat, it’s wrong, you should be doing it a different way, only that different way was called wrong by somebody else in some other book.  So, it just gets too confusing.

So, if you just relax about it, eat when you like to eat, just sort of try to MAKE CHOICES, like we said about fruits and vegetables, etc., you’re gonna be much better off than trying to follow rules that don’t fit with your life.

Craig Ballantyne:    So, we kinda covered most of the metabolism stuff that I wanted to talk about there.  Were there any other myths that you wanted to mention?

So, none of these things are gonna fluctuate massively over the course of a couple of days.  So, your metabolism pretty much is never gonna be broken, but it’s never gonna be, with the exception of exercise, massively increased.  You can just sort of relax.

Metabolism is just a result of being a living organism, so as long as you keep that up, you’re gonna be okay.

Let’s check out a new trend taking off over in the UK and find out what Brad thinks in part 5 of the interview series.