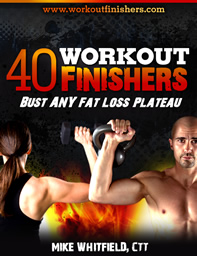 I’ve been on a bodyweight finisher kick recently and I even have a couple for you to try.  But first, I have a humbling birthday story to tell you.  So gather around in a big circle kids, here’s a little story of how important it is to warm up, especially as we get older:

It was a beautiful day here in GA.  It was sunny and 71.  You could almost say it was “purty” (that’s “pretty” southern style).  It was actually my birthday, but my wife and I were not celebrating it until later in the week, so it was pretty much just like any other weekday.

It was a little before noon and I was done training my clients for the day.  I run the gym during the day as well and I was planning on doing some kind of activity although it was my “off” day.  I felt inspired to do some sprints.

As I warmed up with a couple of laps around the building, I thought, “Wow, I may be 37, but I feel 10 years younger.  It’s funny that when I was 27, I felt 10 years older.”  After that, I thought, “Why do people always continue to run straight when they are being chased by a car in movies?  I mean… wouldn’t it be smarter to just turn off somewhere?”.  Finally, I thought, “I sure am random today.  I wonder what was in that energy drink”.

After the couple of laps, I decided to do some “warm-up” sprints, which I usually start with.  I would sprint at about 70% effort 2-3 times.  Finally, I prepared for my first big sprint (roughly about 30 yards).  About 10 steps into it, I felt my hamstring tighten up.  For the first time in my life, I almost pulled my hamstring.  I’ll admit, I felt old.  It was then I realized that since I was aging a little bit to be sprinting, I was going to have to warm up a little more before I did sprints.  Next time, I’m going to throw in some leg swings, squats and waiters bows to ensure that never happens again.  You should do the same.

Well, that’s four paragraphs you will never get back to get to the bodyweight finishers I was talking about.  My bad.

Anyway, I love the challenge that metabolic finishers give me.  I’ve been doing a variety of bodyweight finishers and they have been short, yet very effective.  Some of them are just a few minutes and I want to share two with you to prove two things:

1. You can burn belly fat without doing mindless cardio or crunches
2. You can do bodyweight finishers anytime and anywhere without equipment

So if you want to get away from doing intervals to change it up or you can’t access any equipment, then here are a couple of bodyweight finishers to finish off your workout.  You’ll be burning belly fat for hours with these moves.  These are total body finishers, which can be implemented after just about any sensible program you are on.

Do the following circuit 3 times, resting for 1 minute between circuits:

Be sure to keep those shoulders retracted while doing the squat jumps and lunges so that you work your upper back.  You can also reduce the number of reps based on your fitness level.

Here’s another belly fat burning bodyweight finisher for you to try:

Do the following circuit as shown 1 time.

A modified burpee is a burpee without the jump at the end.  You can also take out the push-up if needed (wuss).

As you will soon find out, the above finisher only took minutes to complete, but you will feel spent.  “Hey Mike, how do you name your finishers?” is probably what you’re not thinking but I’m going to answer that anyway. Between the burpees and jumping jacks, you will have completed 80 total reps.

The fact is you can burn tons of calories and belly fat with bodyweight finishers without going crazy and literally beating your body up.  I’ve seen too many people going absolutely berserk and killing themselves for 90 minutes thinking that’s what it takes to burn belly fat.

You can be in out of the gym with a solid workout program and using a metabolic finisher in an hour or less, even with a warm-up.  It’s all about the intensity.