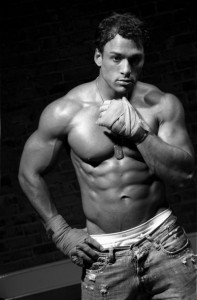 There are  many ways to make your workouts more challenging but at the same time keeping it fun, as John Romaniello describes in part7, of this expert interview series.

Keep in mind that exercise requires you to drink additional water, so be sure to hydrate before, during and after your workouts.

Having a well hydrated body not only will help you to function more quickly and efficiently, it will make you feel more energetic!

Today, John helps us to understand the health benefits that we can expect to see from drinking water.

Craig Ballantyne: All right, very cool.  Let’s move into some nutrition stuff now, and take a look at what you do over the course of a day.  You start the day with 16 ounces of water.  Why don’t you talk about the importance of water?  And do you see that being a big mistake that people are still making. They’re just not getting enough water?

John Romaniello: You know what, I read the weirdest statistic, and I’m trying to remember where I read this. But it was some crazy thing like in 60% of Americans the thirst response is so weak that it’s often mistaken for hunger.  And that didn’t sound like anything that I had heard before. That might be a gross exaggeration, but it’s certainly interesting.

This was posted at a gym where I was working out.  And even if it’s half wrong, even if only 30% of Americans are so thirsty that they think they’re hungry, that is still a tremendous amount of people. And one of the things that I notice, and this goes back 10 years, one of the things that I do when I start a new client is I have them keep a food log and have them write down everything they eat and drink, and then we go over it.

And without question, like 90% of them they’re just not drinking enough water.  Some of them don’t drink any water.  They have coffee and soda.  So it’s really, really, really important to stay hydrated.

It’s one of the single biggest things you could do, and it is literally, the easiest thing to fix.  It’s there.  It’s Free.  Just drink it. I don’t want to try to quantify how much more fat you can burn, but the analogy I like to give is – it’s the most important fluid in your body, right – if your body’s a car the water that you drink is not just the gasoline.  It’s also the oil and the anti-freeze.

All the important fluids that the mechanic charges you $60 to change, you could be changing yourself for free by drinking more water.  That’s what you need to do. So on average I recommend that if you’re working out regularly you just drink one liter per 50 pounds of body weight.

So if you’re a 100-pound woman drink two liters of water a day, which really is not that much.  It seems like a lot, but it isn’t.  If you’re a 200-pound man, drink four.  These are pretty basic recommendations.  But the first thing I do every single morning when I get out of bed is drink 16 ounces of water, and it’s just that important.  It’s the first thing I do when I wake up.

Craig Ballantyne: And then you move on into something called Athletic Greens.  You have a greens product at some point in the morning.

John Romaniello: Yeah.  There are a couple of different greens products that I’ve tried, and I’ve liked.  Athletic Greens, it tastes really good, which is one reason that I’m able to drink it with any level of regularity.   It also mixes pretty well with other things.  I’ve blended it with some ice and some berries.  But you can just mix it on its own, and it covers all of your nutritional bases.  It’s like getting 20 some odd servings of vegetables.

This was originally given to me by the owner of the company, Chris Ashenden who is a real great guy, a really smart nutritionist.  And he’s just a really good guy and he tried to convince me how important it was.  I was like, “I take multi-vitamins, I eat vegetables.”  And in his crazy New Zealand accent he was just like, “Bro just listen.”  And so he basically told me I was an idiot.  He’s like, “Just try it for a week and if you don’t feel better then I will post on my Facebook that I’m dumb, and if you do feel better you post on your Facebook that you’re dumb.”

I’m like, “All right.  Well, any chance to make someone look like an idiot is fun for me,” or make myself look like an idiot. So I listened to him.  I buckled down.  I had it every single day for a week and then two weeks and then a month.  And I felt better.  It’s good for immunity.  It’s good for digestion.  It’s got probiotics in there.  It covers all of the bases that you would need or want covered by a vitamin and mineral.

So it’s the kind of thing where it’s like it’s not a glamorous supplement like a post-workout shake where you feel like you’re energized.  It doesn’t have any stimulants in it.  It’s just some healthy stuff for you.  So I know that all of the guys who are my age and younger are just not going to listen because they don’t care about health.  They only want to look good.

But please, if my opinion or recommendation means anything, pick up some Athletic Greens because it’s pretty good, and it’s tasty.  And you can just mix it up pretty thick and take a shot of it.  For the people who don’t like the way it tastes, stop being a bunch of pansies.  When you first started drinking beer or vodka or tequila you didn’t like the way that tasted either, and you managed to do it.  This is slightly more important.

But yeah, I really like Athletic Greens.  It’s a good product and I’ve managed to make it a habit to use it every day now.  And you do lose fat a little faster because you cover any sort of nutritional gaps that are created when you diet.

Craig Ballantyne: Do you find that you get sick once a year, or you don’t get sick in 10 years?

John Romaniello: Somehow or another, I don’t know if I’m just picking bad restaurants, I normally get sick twice a year.  I get one cold, which I fight off for about a week.  And for whatever reason, I’m telling you somebody in my life doesn’t like me.  I get food poisoning once a year.  I had it in Vegas when I was out there, and you sent me that bodyweight workout. That was miserable.  It was awful.  And I’m assuming that was just in Vegas.  But yeah, I really only get sick once a year.

And then I was a childhood asthmatic.  So when I do get sick it stays in my lungs for a little.  I get upper respiratory infections.  However, it doesn’t inhibit me from training.  It just doesn’t clear up in my lungs as fast as it does for other people.  But I take time off.  I did a blog post about this, like what to do when you get sick, which was cool.

Just really good information in that blog post.  It’s on my blog and it’s from Eric Cressey, and it talks about how Vitamin C is very important and how echinacea which people swear by actually does almost nothing according to most studies.  So when I get sick I just try to be smart and not train my way through it, and just understand that just because I’m sick I don’t get to eat cookies all day just because my mom’s taking care of me.

But I’ll put it on the table.  When I’m sick – I don’t get sick, I’m dying.  I’m like most men.  If I’m sick I tell my girlfriend, I’m like, “You don’t understand, you’ve never been this sick.  I’m dying and I just need you to take care of me until I pass peacefully in my sleep.  I want my dog. I want my blanket, and I want to watch Star Wars until I die because I’m going to be dead in about five minutes.  That’s just kind of what happens.  I’m very whiny when I’m sick.

John Romaniello: I’m kind of a pansy when I get sick.  I’m a whiner.

Check back tomorrow where we take a look at John’s meals and his fat loss program in part 9.