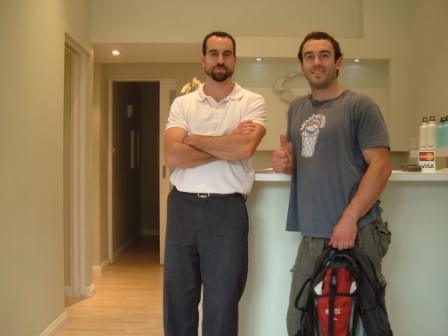 After arriving home I visited a good friend and chiropractic of mine, Dr. Michael Sommers. He immediately begin working on that old injury  I aggravated during last Sunday’s workout performing a technique called A.R.T. (Active Release Techniques).

Over the next few days I am going to share some tips and advice that a good therapist should give you.

CRAIG BALLANTYNE:  Hey everyone, this is Craig Ballantyne from Turbulence Training.  I am here with a good friend of mine and my chiropractor, Dr. Michael Sommers, who is a chiropractor in Toronto at EvolveChiropractic.com.  So Dr. Sommers, how are you today?

MICHAEL SOMMERS:  I’m doing very well, Craig.  Thanks.  How are you?

CRAIG BALLANTYNE:  Very good, thank you.  Because you gave me a little treatment yesterday I’m in pretty good condition here.  So let us start by talking about – just tell them what you generally treat on me.  A bit of my rotator cuff stuff and then maybe talk a little bit about my forearms.  Eventually we’ll get to some lower back stuff too.

MICHAEL SOMMERS:  Essentially what I find with not just trainers, but anybody training hard, one of the main complaints – and I’m sure a lot of people out there are experiencing these sorts of things, and whether they know about it or not is another thing – is that there’s a lot of overuse injury out there.  And it happens to the best of people, even sometimes when they try to incorporate the best technique that they can.

But essentially, in the case of your shoulders, for instance, you train really hard.  And unless your muscle balance is absolutely perfect some tissues will end up firing harder than they’re supposed to.  Or maybe the stability of particular joints or muscle groups or bones is not there and we end up with either some kind of microtear where one of the muscles is overused enough that it tears, or worse you could get a sprain or a strain.

One of the great things about ART – a lot of people seem to know about it now – but it’s Active Release Technique and it’s a deep muscle myofascial stripping technique that incorporates movement into the muscle works.  I’ll take a contact on a muscle group of yours.  For instance, we know that external rotators, like with yourself, a lot of people have overuse in the external rotators of their shoulders.  And there’s good reason for that.  It’s because more often than not the scapula are not being stabilized the way that they should be.

So anyway, we end up working a lot on external rotators.  It can be somewhat painful.  But a lot of people, it’s that sort of hurts so good feeling where I’ll take a contact on the muscle.  I’ll ask you to do a movement and while I’ve got the tension on the tissue you’re pulling the muscle through from a position of short to long.

What that does is it breaks up any little scar tissue or kind of agglutination of blood or any other debris that’s in there from an improper healing process.  And hopefully we get that out.

We flush that out and you’re good at hydrating and doing all the other things that you need to do to help the healing process.  If we’ve done that well hopefully you get back to training hard and the muscle works as well as it can.

CRAIG BALLANTYNE: So let’s delve into training.  What are changes that can be made?  First of all, what is the number one mistake that you were talking about with the shoulder blades that people make in their training?  And then what changes can be made within a workout with various exercises or tips that you give, cuing tips, that we can give to people, to ourselves and to our clients to start eliminating some of the stress on the rotator cuff during exercises?

MICHAEL SOMMERS: Without question, I’d say the biggest infraction is poor scapular stabilization.  Shoulder blade not properly anchored in the proper position to perform exercise at a high intensity.

So basically what happens is we get something called scapular excursion.  So the shoulder blade ends up becoming protracted.  That means coming forward and around the torso more than it should be.

It should be anchored back against the rib cage in a posteromedial position we would say anatomically.  But basically back and down.  If it is then you’re going to be able to perform as well as possible.  If it isn’t those 17 muscles that attach to the shoulder blade are going to function from a position of relative weakness.

So the number one infraction for sure is sloppy shoulder blade mechanics, people not anchoring their shoulder blades down.  And as far as cuing people and how we go about helping people train harder and in a safe way is to teach them to what I call set the scapula with every single repetition.  And that does two things.  One, when you do it every repetition it creates a neural link between the brain and the scapula so that you start to do that automatically.

And we know with certain exercise habits and different stretches we’re now seeing that it’s not about how long you do something.  It’s about the number of times a day that you do that thing.  So if we get someone to set that scapula repetitively over the course of a workout there’s a neural link that’s created there, and then hopefully that becomes automized so that it becomes automatic.

So essentially I just cue them to keep the shoulder blade in a position that’s back and down throughout the course of the entire movement pattern.  Most people do find that they’re actually a bit stronger when they do that; to do that you have to use a bit of core stabilization as well because it requires the abdomen to keep in a particular position.

So again, you’re adding more stability to the whole process.

This goes for other lower body issues as well.  When sometimes we have to position the pelvis in a particular way to try and create more power generation and do it safely as well.  But definitely shoulder blade mechanics is something people out there should really be thinking about because that’s how your arm attaches to the rest of your torso.  And if it’s not anchored down in a proper fashion, there’s no way to generate maximum power and there’s no way to even exert yourself at a high rate and do it safely.

CRAIG BALLANTYNE: You know what we need is we need a little referee in there calling shoulder blade infractions in the gym.

MICHAEL SOMMERS:  Totally.  Absolutely, a whistle and striped shorts.  That would be nice.

That’s all for today but join me in part 2 where we discuss the benefits of stretching.