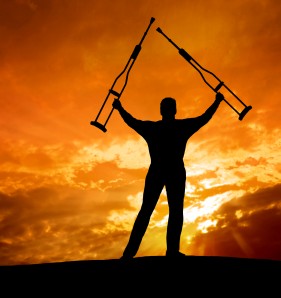 A healthy perspective has allowed me to view so-called physical handicaps in a different light since my daughter was diagnosed with multiple sclerosis at a relatively young age. Like most parents confronted with the illness of a child, I went through the usual stages of denial, anger, and despair.

However, as the years passed, I increasingly focused on how lucky my daughter was that she did not have the chronic-progressive type of multiple sclerosis. People with the latter form of the disease deteriorate rather quickly and usually become confined to a wheelchair early on. My daughter, who is attractive, intelligent, and personable, has been able to lead a relatively normal life, raise two children, and continue on a successful career path.

Knowing that there are millions of people much worse off than my daughter has had a positive effect on both of us. Even more positive are the endless stories of severely disabled people who have enjoyed great success and managed to live meaningful, vital lives by taking action to overcome their handicaps. One story of special significance to me is that of Ronan Tynan.

Tynan was born with deformed legs, which caused him to suffer severe scoliosis. It got so bad that at age twenty he made the unimaginable decision to have both of his legs amputated below the knees and wear prosthetic lower limbs. That could have been the end of his dreams, but, instead, it was the beginning of one of the most action-oriented lives imaginable.

Ronan set his sights on athletics, and went into serious training. From 1981 to 1984, he won eighteen gold medals and set fourteen world records competing in events for the disabled. These feats alone could have been the basis of an incredible inspiration story, but Ronan was just getting started.

He next made the decision to become a medical doctor, and enrolled at Trinity University in Dublin, Ireland. At thirty-two, he began practicing medicine, which one would have thought would have put an exclamation point on his huge capacity to overcome adversity. Not even close.

Having discovered that he had a gifted tenor voice, in his spare time he took up singing in pubs. In 1994, he entered a television talent show in Ireland — and won! He soon gave up practicing medicine and became a world-famous stage performer. Still, Ronan’s trials and triumphs had not all been written.

As a result of a sinus-drainage problem caused by the return of a childhood injury he had suffered, he suddenly lost his voice and, reluctantly, returned to the practice of medicine. After a long period of recuperation following surgery to correct the problem, he slowly regained his magnificent voice.

Today, he thrills audiences throughout the world with his stirring performances, and, at fifty-two, is a relatively young man. Where he goes from here is anybody’s guess, but he already has had a major impact on millions of lives, and mere mortals like myself are deeply grateful to him for the inspiration he has provided through his astonishing success.

Inspirational stories like that of Ronan Tynan abound by the thousands. From Helen Keller and Franklin D. Roosevelt to Stevie Wonder and Stephen Hawking, the evidence is clear that physical handicaps can be overcome. Always keep in mind that a handicap is just a disadvantage that makes success more difficult, but there is a clear difference between difficult and impossible.

In fact, technically speaking, a handicap is not necessarily a physical disability, but any kind of disadvantage that makes life more difficult. Indeed, over time, I have come to realize that every person in the world has at least one bona fide handicap.

You, too, have a handicap. In fact, you probably have many handicaps. I don’t know what your handicaps are, but I know you have them. Everyone you meet, in spite of how successful or how happy he may appear to be, has a cross to bear. No one makes it through life without experiencing the hardships caused by a handicap, and each of us is faced with choosing between three alternatives when it comes to dealing with those hardships:

As thousands of inspirational stories about overcoming adversity have demonstrated, the third alternative makes the most sense to a rational individual. One thing we know for certain is that we expect God to reshuffle the deck for us. The good news, however, is that we do have the power to make a conscious decision to play the cards we’ve been dealt to the best of our abilities.

It’s nice to know that, in the final analysis, it always comes down to what you do with what you have.

[Ed. Note. If you’re ready for a treasure chest of proven ideas, strategies, and techniques that are guaranteed to dramatically improve your dealmaking skills – and, in the process, increase your income many times over – you won’t want to miss Robert Ringer’s bestselling audio series, A Dealmaker’s Dream.

Robert Ringer is a New York Times #1 bestselling author and host of the highly acclaimed Liberty Education Interview Series, which features interviews with top political, economic, and social leaders. His recently released work, The Entrepreneur: The Way Back for the U.S. Economy, shows the pathway back to prosperity paved by entrepreneurs. Ringer has appeared on numerous national talk shows and has been the subject of feature articles in such major publications as Time, People, The Wall Street Journal, Fortune, Barron’s, and The New York Times. To sign up for his e-letter, A Voice of Sanity in an Insane World, visit www.robertringer.com.]