Today I spent 3 hours on the phone talking to someone. He was a TV producer from a prominent TV cooking show, and he wanted to know everything about my life. And I mean everything.

I’ll tell you which national TV show I’ll be on in a minute. But for now, I want to tell you about this conversation because I had an aha! moment when he asked me: “How would you define your style of cooking?”

You see, people ask me that all the time. But now that I was talking to a guy who’s going to put me in front of a live national audience all I could think of to describe my cooking was: Simplicity. 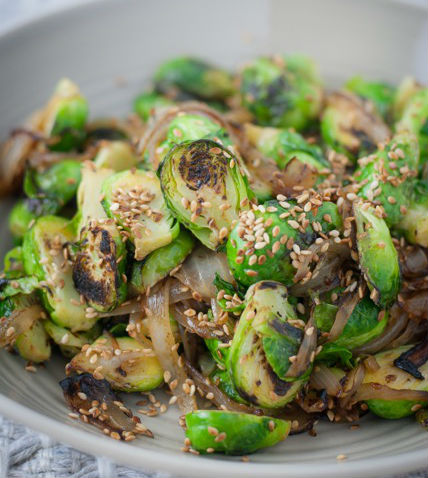 The more I gain experience as a chef, the more “simple cooking” appeals to me. It’s not easy to achieve simplicity. Probably because we always think that to cook better, we need to pile on more and more “stuff.” More spices, more ingredients, more herbs… But the truth is, we often cook great food when we keep it simple.

Take my Brussels Sprouts recipe, for instance (on page 201 of Eat More, Burn More). Couldn’t be simpler. Many people don’t eat Brussels Sprouts because they have reminiscent thoughts of being forced to eat overcooked, brownish stinking bombs as a child. Yet, Brussels Sprouts only become great once they are simply sautéed for a few minutes. Then they remain bright green, firm, tasty, and so nutritious (you’ve all heard about eating more green vegetables to lose weight, right?).

My recipe has 5 ingredients. Including salt and pepper. That recipe is amazing because we’re letting the vegetables “speak.” We don’t force them into something they’re not (stinking bombs!). We don’t coerce them; we set them free. Only then the magic happens and eating vegetables becomes a rewarding experience. Trust me, I’m a chef. And a skinny chef at that.

As a bonus, you’ll find my simple Brussels Sprouts recipe below. One thing I didn’t tell you though (chef tip alert!), is that simplicity also cuts a lot of time in the kitchen. Truth be told, I am busy and I know you are too. So sometimes, it’s great to spend 20 minutes in the kitchen instead of 60. Especially when the kids are screaming (I have 5, so it’s like a concerto!).

Now, I promised to reveal more about that TV show. Well, I can’t tell you much more right now, but I’ll be on Food Network’s “Beat Bobby Flay” sometime in the Spring of 2016. I’ll attempt to beat the master with something truly great: Simplicity.

Story:
I feel bad for Brussels sprouts, tiny with such a bad rep, people complaining incessantly about their smell, and how much they dislike ‘em. Life must be hard.

Chances are, though, if you dislike (or hate!) Brussels sprouts, it’s because you have no idea how to cook them. Granted, overcooking will turn them brownish, mushy, and very smelly. That’s not what we want. We want bright green vegetables, a nice sear, firm to the tooth, tasty but not offensively tasty, subtle. Brussels sprouts are about subtlety of taste and texture. And that’s what you get if you very simply cut the buds off, maybe half them, and just sauté them in olive oil, salt and pepper, and voila! Give the sprouts a chance.

For a delicious and healthy chocolate cake recipe CLICK HERE!

Posted in Diet, Fat Loss, Health, Nutrition, Vegetarian
#repost from @motivationmafia With all the hard w