To get your engine running in the morning, you fuel up on that high-octane Triple, Venti, Soy, No-Foam Latte and head to work to tackle the day with force. Or, maybe that merely lifts your eyelids to proper position for the next hour. Regardless, what you’re sipping on may be providing you with a lot more than just caffeine. So, just what’s lurking in your cuppa Joe? 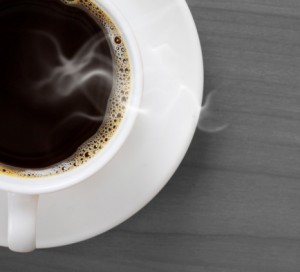 Did you know that the average cup of coffee is laced with approximately 1,500 chemicals, with around 850 of them being volatile substances, including some known to cause cancer in rodents? Those lab rats were fed much higher levels than what is found in a comparable cup of coffee, but in the end, if they are causing cancer, they probably aren’t good for you. Not to mention, coffee workers and their families have higher-than-average rates of cancer. Coffee production is lazily regulated, or maybe it’s far too difficult to keep tabs on the second most highly traded commodity in the world (after oil).

BEST. Breakfast. Ever. (recipe inside)

Many of the chemicals found in coffee are used for aroma. Other chemicals are toxic compounds used to ward off pests and diseases during bean growth. Here’s a microscopic portion of what’s swirling in your bean brew:

1. 2-Ethylphenol: Used for flavoring, 2-Ethylphenol is also a component of cockroach pheromones that warns others of danger. It’s also found in paint.

2. Diacetyl: Although deemed by the U.S. Food and Drug Administration as safe to ingest in small amounts, diacetyl can be toxic when inhaled during the roasting process. In fact, testing at two mid-sized coffee roasters in the U.S. found diacetyl levels exceeded safety standards, and multi-million dollar settlements were awarded to several coffee roasters with fatal lung diseases. It is also found in electronic cigarettes, so more lawsuits to come.

3. Furan: A chemical the World Health Organization is concerned about because of its carcinogenic properties, Furan was found in all eight coffee types tested in a study.

4. Triadimefon: A copper-based compound used to treat fungal infections, Triadimefon has been found to accumulate in coffee crop soils, leading to copper toxicity. It may lead to reproductive problems.

So, what can you do to enjoy your brew without worrying that you’re risking your health ?

This information is not intended to scare you but to help you safely enjoy one of the world’s most popular drinks.