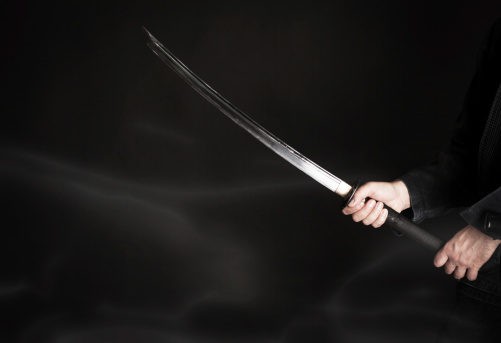 Almost two years ago, I started martial arts training—a mixture of Eskrima, Pangamot, Pencak Silat. During the first few weeks of training, it became clear to me that there were several things about this art that were completely counter-intuitive.

When you have no idea how to fight (I didn’t), your natural reaction to someone coming at you is to move away from the oncoming attacker. Sounds obvious right?

So if someone is coming at me with a stick, my natural reflex is to lean back and dodge it. Turns out that’s a great way to get yourself killed!

I quickly learned that when you have someone coming at you, the smart thing to do is to enter into their space and engage from there. Like I said, when you’re starting out, this feels totally wrong.

So over the months, I’ve learned how to “enter” into my opponent’s space and then do my thing. Instead of waiting out on the fringes trying to dodge a hand, a knife, or a baseball bat, you enter into the space of the attacker and take control.

There are quite a few different entries and an unlimited number of variations, but the goal is the same. And the results are amazing. The entry kind of sets the stage for the next step. It’s almost like the seed from which everything else comes.

This is exactly what happens when you begin the conversation with a prospect or new client. The future success you will have grows out of the way you enter the relationship. The way you enter sets the tone for everything that is to come. So that means you need to be extremely deliberate about how that plays out.

I wish I had known just how important this was when I first started consulting. But I didn’t. And because of that, I constantly got myself in annoying situations with clients.

When you truly understand the value of the entry in a new client relationship, you will never again fall for the “we’ll pay you peanuts now, but if it works out, there’s a lot more business coming your way…” line again… EVER. Because you’ll know that an “entry” like that does not contain the seeds of future success. It will actually steer you away from success.

In fact, entering a client relationship that way contains seeds for annoyance, frustration and too much work for too little.

The entry is about building the box of perception. Your actions at the beginning of the relationship build the boundaries of that perception in the minds of your clients.

You want to be very careful about where those boundaries get placed—because once they are built, they are very difficult (almost impossible) to change. This is why it’s tough to drastically raise your rates with an existing client.

Once they’ve put you in a “box” about what rates you should and should not be getting, it is quite tricky to redefine those boundaries. I wouldn’t even bother trying. It just runs counter to human nature. There’s an enormous amount of inertia to overcome to change someone’s belief about something.

So here are a few foundational principles that I’d recommend you think through regarding your “entry” into the world of your clients. These are things I’ve learned over the years, primarily by doing the opposite of most of them.

Principle One: Be The Tortoise

I’m not the most patient guy in the world, but I’ve learned that when it comes to engaging clients, slower beats faster. You would think you want to close the business while “the iron is hot,” but moving too quickly just sends a bunch of the wrong signals if you’re selling yourself.

It jumped out at me the first time I read Dan Kennedy’s Trust Based Marketing book where he said something like, “The longer you can delay the sale, the better off that sale will be.” I’ve found that to be completely true.

You want to be pursued. And that’s never going to happen if you run straight towards your prospect in an effort to close the business.

Take your time (despite your circumstances), move slowly, move deliberately. It will pay off over the long run.

Principle Two: Be Willing to Walk Away… ALWAYS

He who wants it least has the power. It’s a rough road to attempt to change the way you feel, so I don’t recommend that as a quick route to success here. Instead, you just have to control the actions you take and the words you say. You don’t do things that express need.

The cool part about this is that, over time, this habit of action you are forming does actually invade your feelings. Eventually, when you’ve done it enough, you will find yourself developing a complete indifference to whether or not a particular piece of business closes. This is the position you want to be in. This is the position of power.

I first heard that phrase from consultant Alan Weiss, from whom I’ve learned a ton over the years. The underlying principle, however, is a business strategy known by many successful entrepreneurs for centuries.

Always take the long view. That’s obvious right? But for service providers, it’s even more important. When you’re selling widgets, the primary motivation for buying comes from the widget. The customer sees the widget on the shelf and says, “I want that.”

When you’re selling yourself, though, things get a whole lot weirder. Now we’ve got humans involved, with emotions, fears, desires, insecurities, baggage, issues.

This makes taking the long view even more important. But I’m not speaking about this in terms of “you want your client to come back.” The main idea I want you to think about is that how you act on the first sale is going to affect the size, ease and profitability of future sales.

That’s what makes “the entry” so important. It’s truly setting the tone for everything to come.

Principle Four: “By the Seat of Your Pants” Is Not the Way to Fly

I wasted a lot of opportunity and time “flying by the seat of my pants” when it came to engaging with new clients. In the past, my goal was to “sell the client.” So I navigated my way through the situation trying to get to that goal.

Over the years, that approach has shifted as I began developing more of a process for entering a relationship with a new client. Now it’s more about the client going through the process than it is about me selling them. So as you are working through this part of your business, understand that the goal is to end up with a process you can follow.

This keeps emotion out of it. This allows deliberate movements that you’ve already thought through. This keeps you from reacting and keeps you focused on acting.