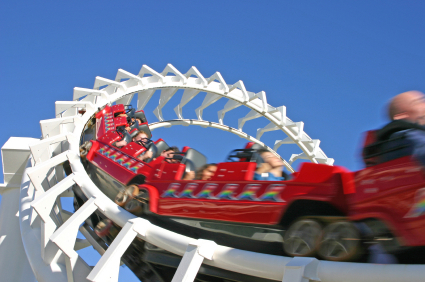 A new client who agreed to sign up with you suddenly cancels.

The deadline your plumber swore to passes without anything having been done.

The trick to dealing with disappointments like these is to have a “What if it doesn’t happen?” plan in place almost from the start.

If, for example, you are hoping to be in London for Christmas this year, go ahead and book the arrangements – but spend a few minutes thinking about what you could do instead if, for whatever reason, the trip falls through. (A special Christmas at home – celebrated in some new and interesting way – may turn out to be even better.)

A fallback plan also works in the event of an unforeseen interruption in your routine. Always being prepared with a list of tasks you have wanted to accomplish for a long time is a good way to turn unexpected down time into a rich, rewarding experience.

A few years ago, for example, I tore up my knee and had to have surgery that put me on my back for two weeks and off the Jiu Jitsu mats for six months. For someone with my schedule (and addictive mentality), this could have been very bad. But since I’d had prior knee injuries and, therefore, knew that I was likely to undergo this operation some day, I had developed a fallback plan that made the recovery time bearable.

My fallback plan for the two weeks in bed (and on painkillers – which meant I couldn’t do any meaningful work) was to catch up on all the great movies I had never seen or seen only once. My fallback plan for the six months of Jiu Jitsu inactivity was to use the time to rest and restore my shoulders and back, which were seriously ailing.

The movie-watching plan went very well. I saw two or three great movies a day – more than 30 in all. I also managed, during the second week, to read a half-dozen business publications that had accumulated on the corner of my desk. Far from feeling blue and abused, I was in a very good mood during that early period of convalescence – and that was entirely due to the fact that I felt like I was finally getting to things I had long wanted to do.

My fallback plan for the six months of inactivity was more challenging. I still went into the Jiu Jitsu academy every free moment (and I occasionally helped out with a lesson), but, mostly, I was frustrated by not being able to train again – a feeling that intensified as my knee got better.

But because I used that time to have my shoulders and back worked on, after putting it off for more than three years, I felt that I was accomplishing something. And because of all the care I took in healing my body, when I finally began training again, I was able to compete for the first time in years with an injury-free (though age-addled) body. That felt good.

Then ask yourself the same questions about your personal life.
If you don’t have a fallback plan, develop one. When you do, make sure it’s something you can be happy with. If it isn’t, work on it some more. You’ll find that the more time you spend refining it, the more attractive it will become.

And in case you unexpectedly end up with time on your hands, prepare now by making a list of projects and/or tasks that you have always wanted to do. (Have you been thinking about writing a novel? Researching your family tree? Have you long been frustrated because you can’t speak a foreign language? Can’t dance the salsa?)

Spend some casual time thinking about your “dream” projects, refining them, and imagining how you can make them happen. The more time you spend doing this, the more excited you’ll be about it. And then, when the time comes (and it almost certainly will), you will move from disappointment to anticipation in no time flat.

[Ed. Note: Mark Morgan Ford was the creator of Early To Rise. In 2011, Mark retired from ETR and now writes the Palm Beach Letter. His advice, in our opinion, continues to get better and better with every essay, particularly in the controversial ones we have shared today. We encourage you to read everything you can that has been written by Mark.]
Posted in Careers, Entrepreneur, Self-Improvement, Skill Development, Wealth and tagged Life Without Limits, Nick Vujicic, Your Life
This error message is only visible to WordPress admins