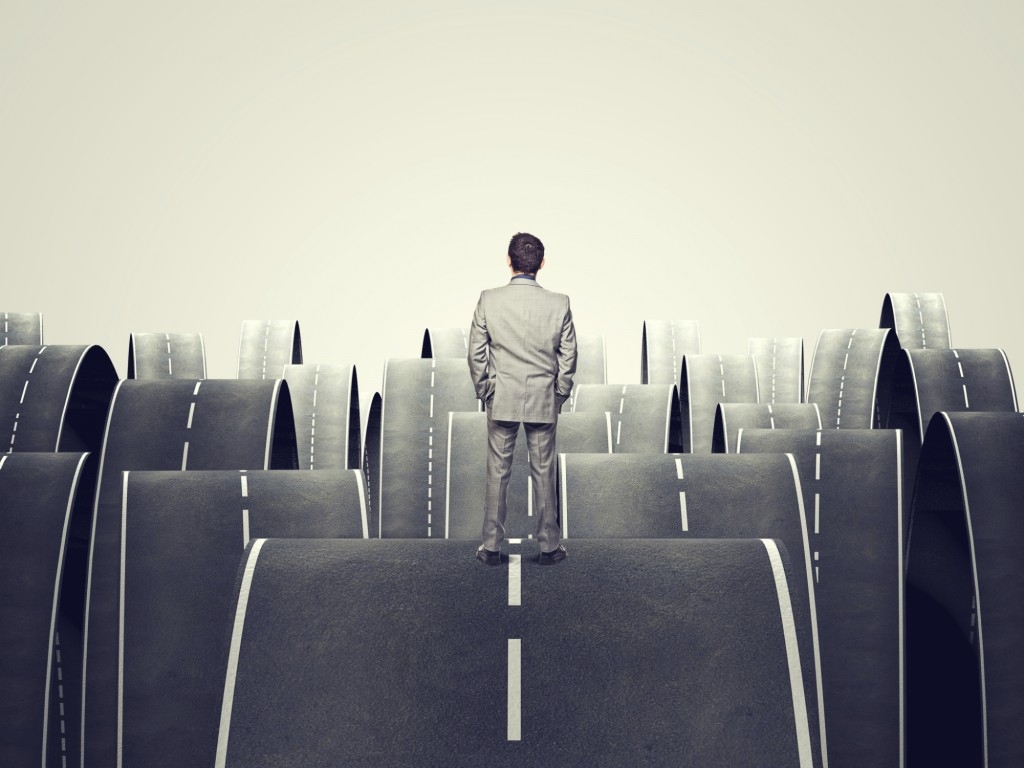 But now I have a new company that is well funded. And I have a blog that allows me to feel like a published writer every time I hit the publish button. I have reached so many of my goals, and it’s time to pick another.

We have a limited amount of willpower, and if all our options are open, we have to use our willpower constantly. We are much better off removing choices and creating routines that preserve our willpower. I eat too many calories every morning at breakfast. Mostly it’s because I know I have to wake up and write. And like all good writers, I’m terrified that I’ll suck when I write so I am scared to write.

I talk to so many people who say they don’t know what they should do next. But actually they just don’t have the guts to close off options. The key to committing to a goal is to understand that you will not be trapped, because taking options away from yourself actually opens up more possibilities for yourself.

Throughout history, tons of options for survival made humans increasingly adaptable to the point that we relied on it to outlast all our evolutionary competitors.  Chip Walter warns, in his book Last Ape Standing, that our penchant for keeping survival options open has driven us to insanity as survival comes more and more easily. The extreme adaptability that served us so well in evolution is, today, a source of anxiety; at any given point we could choose one of a million options for our life. But the overwhelming number of options only makes us stressed, depressed and anxious.

Walter shows how social, cultural and technological leaps give us so many choices that we do the evolutionary equivalent of imposition – that is, we choose nothing and simply gaze at possibilities.

Multitasking is the act of refusing to prioritize one thing over everything else. It’s non-commitment on a micro scale. It’s easy to see it doesn’t work. That’s why texting and driving is illegal. It’s why Twitter does not allow cell phones in company meetings.

The problem is that most of us think we are special. We think we can multitask in a productive way. Psychologist David Strayer does research that will at least take that particular possibility off the table for you: Only 2% of the human race can multitask without compromising their ability to do either task. It’s something you are born with. “And,” he says, “that 2% is not me or you.”

We display irrational behavior when we have too many choices

Dan Airely studies this phenomena in a wide range of scenarios. For example, he offered six types of jams for sale and then he offered 24 types. He sold more when there were six types because people hate deciding anything when there are 24 choices. You may have conducted a study on this topic yourself. You don’t want to be tied down to a life partner so instead you keep picking terrible people to have relationships with in the name of keeping your options open. (The book that contains examples of his studies is a fun read: Predictably Irrational)

I see the same problem in my career coaching clients. I know, for instance, when I’m coaching a never-been-married 38 year-old woman who is in a career that she hates, it’s a pretty safe bet that she doesn’t want to commit to a love interest or a career and so she chooses bad samples of each in the name of not being tied down.

So what can you do? You can’t change thoughts and feelings. You can only limit your options.

The only way to be a writer is to write. If I waited until I was excited to write, I’d never write. Because even when I have something great to say, if I have the option to procrastinate, I will take it in the hopes of finding something even greater to say later on.

So I tell myself I have to write. I don’t have a choice. I don’t get rid of the feeling of fear that everything I write will be terrible. I accept that feeling and manage what my choices are for responding to it. I’m a good writer because I have successfully convinced myself that there is not an option to be too scared to write. I can just write scared.

It’s how I’ve accomplished everything in my life: I went to the volleyball courts in LA even though I had no idea how I was going to get someone to play with me. I pitched my company to get funding even though I could always think of things I needed to do before I pitched the company.

Success comes from taking action. And the only time I’ve taken action to get something big is when I convinced myself I had no other option.

People tell me it’s so impressive that I drive 20 hours a week so my eight-year-old son can play cello. I tell them it doesn’t feel impressive because I don’t feel like I have a choice. He’s very talented and he works hard it’s what I need to do for him.

You might tell me that I do have a choice. When we have a choice to not do something big, we don’t do it. Each of us has a challenge to find something big that we want and then convince ourselves there is no option but action. Focused action does not include hedging our bets with something else. Because hedging your bets is like multitasking: everything degrades. And taking action toward a goal we’re committed to is like splashing cold water on your face: it’s difficult and jarring but you feel power to do anything in that moment.

[Ed Note: Penelope is businesswoman, author, and blogger. Her work focuses on the intersection of work and life. Trunk is the author of the books Brazen Careerist: The New Rules for Success, The New American Dream: A Blueprint for a New Path to Success, and The Power of Mentors: The Guide to Finding and Learning from Your Ideal Mentor. She blogged at Brazen Careerist before leaving that company. She now runs Quistic, her latest start-up venture–an education company–and maintains a personal blog featuring career advice here.]