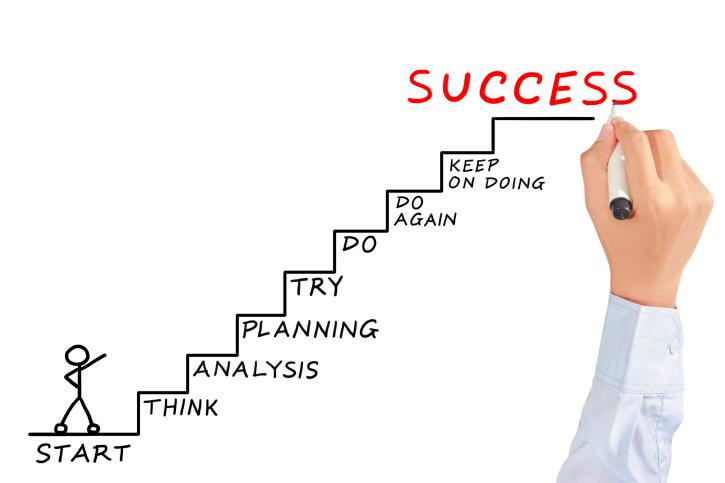 In Part 1 we saw that “Success” (from accomplishing a specific goal to an overall feeling of well-being and gratitude) can be defined a number of ways depending upon its context.

I believe most would agree that a person who is financially successful but has a poor relationship with their spouse has not attained true overall “success.” The same could be said for the one who is spiritually successful but can’t feed their family.

“Success” can be very specific, as in the triumphant completion of a particular goal. This could include building a business, dropping 25 pounds, attracting a mate, lowering your golf score and much, much more.

How to Successfully Obtain Practically Any Goal

If one would like a sure-fire method for achieving a certain goal or desire, there is a methodology they can use I call The Success Formula.

In studying Success for years and applying the methodology personally, I can genuinely state the following: Every time you and I have utilized The Success Formula (whether knowingly or unknowingly) in attempting to achieve a goal, we have succeeded. Every time we have not utilized this methodology, we have not succeeded.

We might have used one or two of the principles expertly and effectively, but we didn’t use all three. And all three must be used in order to achieve any type of significant success.

Principle Number One: Seek Out And Find The Information

Want to get to the diamond mine? First, find a map. In other words, if you follow a system of proven strategies and actions that have been utilized by those who are already successful (where you want to be) there’s a good chance you’ll reach your goal, and reach it faster; Much faster than you would without it.

I define a system as “The process of predictably achieving a goal based on a logical and specific set of how-to principles. The key is predictability. If it’s been proven that by doing “A” you’ll get the desired result of “B” then you know that all you need to do is “A” and eventually you’ll get “B.”

If you want to be an expert copywriter, you can learn from Jason Leister. Want to grow your fitness business? Then seek out Bedros Keuilian. Is mastering your finances your desire? Then follow Alex Green’s system. Whatever you truly desire, find out who has already accomplished it and learn from them.

Another name for this is O.P.E. or “Other People’s Experience.” There’s no need to reinvent a wheel that’s already been invented. Learn from one who already knows how to build one.

The great news is that practically anything you desire to accomplish not only has already been done by someone else, but has been systemized as well. You can learn that system from books, audio/video programs, computer software, live seminars, or for the right price, personal mentoring.

So first, seek out and find that system. It’s out there for you!

So many people sit on newly found knowledge, waiting until the time is “just right” to utilize it. Don’t fall into that trap. The right time is right now. Do not delay. Apply the information immediately!

It’s often said that knowledge is power but you know that’s not true. Unless you apply it, it’s as good as non-existent. In order to move your current reality from where it is today to where you want it to be, it’s imperative you act upon your knowledge, and do so now.

But what about, “I’ll just wait until…I have more money…I have more time…I receive my tax refund…my kid graduates…summer (autumn/winter/spring)…” or all the other excuses? One trademark of successful people is that they don’t let excuses deter them. They determine what they need to do—and they do it.

They realize that if they don’t, they’ll most likely fall victim to “The Law of Diminishing Intent,” which states:

“The longer you wait to do something you know you should do now,
the greater the chances are you’ll never actually do it.”

The good news is this action doesn’t have to be perfect. The late Zig Ziglar famously said, “Anything worth doing is worth doing poorly until you learn how to do it well.”

Of course, he didn’t mean to purposely do something sloppily or haphazardly—simply that taking action is the key; excellence will come in time. Knowledge, when internalized through repeated action, becomes wisdom.

The desire is etched into your heart, you’ve learned a system for accomplishing it, and you are beginning today. Now, what happens when you fall down along the way? And, you will. We all do.

Here is where the rubber meets the road. There is one last vital Principle, without which no success of any significant measure can ever be attained; persistence.

Fall down, get back up. Rinse and repeat. Many times! There are so many poems, inspirational sayings and historical examples regarding this topic one would think the concept self-evident. Yet how often do people quit before their labors ever begin to bear fruit? Or worse, those who quit just as the momentum they’ve worked so hard to build is about to manifest.

Giving up too soon is an insidious tendency to which we’re all susceptible. Resisting that tendency makes all the difference in the world.

Successful people know that while a little luck along the way is always helpful, that is never the reason for their success. They simply kept coming; walking past, around, and often through the NOs until they get enough Yeses to succeed. Like The Little Engine That Could, they just kept chugging along…not to be denied.

So, go into it knowing you’re gonna’ get knocked down. And, be willing to get back up.

Beginning with your burning desire, you tied it into the Three Principles: You found the right system, you’re applying it, and you’re being persistent. But, what keeps you from giving up?

Belief! Yes, belief in yourself; belief in your desire; and belief that what you’re doing is providing great value to everyone involved in the outcome.

Yes, with a strong enough desire and a powerful enough belief, along with the three Principles of The Success Formula…Success is yours.

However you define it!

[Ed Note: Today’s article was based on Bob’s booklet, The Success Formula which are sold in packs and make a terrific prospecting tool. If you enjoyed this article, visit http://www.burg.com/the-success-formula-booklets. You can read the entire booklet online and, if you’d like, order a packet of booklets to give to your prospects, customers, clients and referral sources.

Bob Burg (www.burg.com) is coauthor of the International Bestseller, The Go-Giver. The book has been published in 22 languages and has sold over 250,000 copies. Check out this brief and entertaining overview of the book at http://www.burg.com/tgg where you can also download Chapter One. And, of course, feel free to share it with others.]

Posted in Motivation, Self-Improvement and tagged success
This error message is only visible to WordPress admins