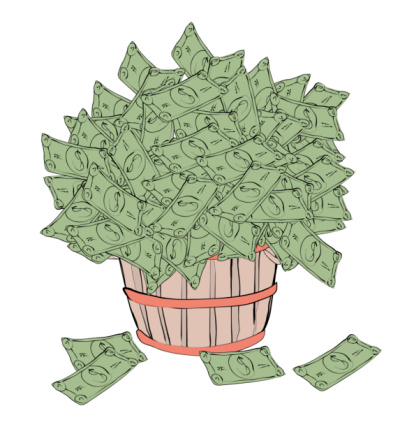 I grew up relatively poor, the second of eight children. My father earned $12,000 per year as a college professor. As a teenager, I was ashamed of our small house, my hand-me-down clothes, and my peanut-butter-and-jelly sandwiches.

I dreamed – literally dreamed – of living like a rich man. And so, when I got my first job at age nine as a paperboy and then at 12 as a lackey at the local carwash, I would spend my money on luxuries – a pair of brand-new Thom McAn shoes.

I tell you this to emphasize a key part of my system. I don’t believe in scrimping severely to optimize savings. I believe you can live a rich life while you grow rich, as long as you are willing to work hard and you are smart about your spending.

During their 20s, they spend every nickel of their modest income to make ends meet. At that age, it is nearly impossible to put aside money for the future.

During their 30s, their income increases. But this is also when they start a family. Expenses soar. There are more mouths to feed, a “family” car to buy, and the dreaded down payment on a first house. They manage to save a little during these years, but not nearly as much as they thought they would.

If they work hard and make good career decisions, their income climbs much higher in their 40s and early 50s. They have more money to put aside for the future, but they are also tempted into buying newer cars, nicer clothes, more exotic vacations, and that dream house – the biggest wealth-stealer of them all.

Later, in their 50s and 60s, their income plateaus or even dips… and they may have to start shelling out for college tuition. Then, aware that their retirement funds are being depleted rather than enhanced, they invest aggressively to try to make up the difference.

Finally, sometime in their mid to late 60s, they realize that they don’t have enough money to retire. They have spent almost 40 years working hard and chasing wealth, but they never managed to attain it.

It’s sad, but it’s the reality for most people. And it is just as true for high-income earners (doctors, lawyers, engineers, etc.) as it is for working-class folks.

There are two lessons to be drawn from this: First, it is very difficult to acquire wealth if you increase your spending every time your income goes up.

The truth is there is only a marginal relationship between how much you spend on housing, transportation, vacations, and toys and the enjoyment you can derive from them.

In fact, there are dozens of ways to live like a millionaire on a modest budget. If you learn those ways, you will have a tremendous advantage over everyone else at your income level.

Make smart spending decisions. Remember, the spending bucket has a hole in it. As you make more money, you might feel tempted to spend more. But if you’re spending more of this money, that’s the same thing as ripping a much bigger hole in your bucket.

All that extra money you’re making is leaking out of the bucket at a faster rate. And that means you’re not filling your savings or investing bucket any faster.

Here’s what I’d like you to do: Figure out how much you need to spend every year to live your own personal version of a “rich” life. It might help to spend a few minutes thinking about all the things you truly enjoyed last year. If you are like me, you’ll find that almost all of the things you enjoy require very little in the way of money. (Those are the true luxuries.)

Keep the biggest wealth-stealing expenses – such as your house, your cars, and entertainment – to a necessary minimum. And eschew any expenditure that has a brand name attached to it. Brand names are parasites that gobble up wealth.

What you are doing is determining the size of the hole in your spending bucket. It should be smaller than the hole you had last year, but big enough to contain inexpensive luxuries that will make your life truly rich.

Don’t nod your head and promise to get to it sometime in the future. Do it today. Estimate, as well as you can, what you need to spend each year to have the life you want. I call this your LBR (lifestyle burn rate). This is a number that you must have firmly in your mind, if you intend to be a serious wealth builder.

The Golden Bucket of Savings

Once you have dealt with your spending bucket, you can start to figure out how much you can put in your saving and investment buckets.

You may be wondering what the difference is between saving and investing. To most people, they are the same. But I like to distinguish between them because it will help you acquire wealth safely.

Saving and investing are the same in the sense that you are setting aside some portion of your current earnings for the future. The difference is the purpose of saving is to safeguard that set-aside money, whereas the purpose of investing is to grow it.

The money in the savings bucket should comprise two things, really. The first is anything you are saving for that you will be paying for in less than seven years (more on that in a minute). Any type of big-ticket item.

That could be short-term things such as saving for a new car, upcoming vacation, or home renovation project.

Saving should also include long-term expenses such as a down payment on a house.

The second part of your savings bucket is what I refer to as your SOA (start-over-again) fund – the money you put aside in case of a financial disaster.

To start, your SOA fund should have a minimum of three months’ living expenses. That would cover a couple of big, unexpected bills. Maybe a blown transmission. Or some expensive dental work from your kid chewing on too much candy.

But what if you have a bigger financial disaster?

What if, for example, you woke up one day to find the company that has employed you for the last 20 years has shut its doors and the pension plan it was holding for you is suddenly worthless?

You would have to start over, right? You’d need money to pay for your expenses while finding a new job and you’d need money to start investing again. In a case like this, you might want a larger SOA fund. Maybe one year of living expenses.

How much you put in your SOA fund is a personal preference. At a minimum, set aside three months of expenses. If you can afford to, set aside more.

But where should you put your savings bucket money?

This money has to be absolutely safe.

For example, you know you’re going to need to replace your roof in two years. That money better be there when you need it. In other words: Don’t invest that money in penny stocks or the latest tech stocks.

Or let me put it to you this way…

Imagine how you would feel if you called up your broker to let him know that you needed to cash in your SOA fund and he told you its value had suddenly crashed and was now worth $0.40 on the dollar?

Well, that’s exactly what happened to millions of baby boomers during the financial crisis in 2008 and 2009. The reason it happened is because these people did not distinguish between saving and investing. They had their wealth – including their savings – in investments that were advertised as safe but were actually quite risky.

You don’t want to take any risk with your start-over-again money. Or money saved for upcoming big-ticket purchases within seven years. The primary purpose of that money is to preserve, not increase, the capital you set aside. Putting it at risk, even average market risk, is too dangerous.

It’s somewhat arbitrary, but it is considered by some to be an average business cycle. The idea is this: You can put money away for retirement and your kids’ college into investment vehicles, but when they get close – seven years or closer – move them into safer instruments so that you can be extra sure you will have enough.

If, say, your retirement is still 20 or 30 years away, you can afford to invest money set aside for that purpose in vehicles that are safe, but not super-safe. However, if you will be retiring in less than seven years, you can’t take the chance of seeing your retirement fund drop by 20%-30%, because you won’t have time to let the market correct itself.

So if you plan to retire in five years and will be drawing on your retirement savings, you want to transfer at least five years’ worth of your retirement fund from your investing bucket to your savings bucket. This ensures that you will be able to pay for the retirement life you want – you can’t afford to have that money at risk.

To plan for this, you will have to assume that the interest you’ll be getting for those seven years will be small, because you’ll be using only the safest vehicles. So that means you will have to put more money into them than you would otherwise. This will take more work but it will provide more safety.

Are you with me?

For your savings bucket, your money should only be in super-safe investments – investments that are highly unlikely to go down in value in the next 10 years. These include bank savings accounts, money market accounts, CDs, and safe bonds with short-term durations.

How is your savings plan going?