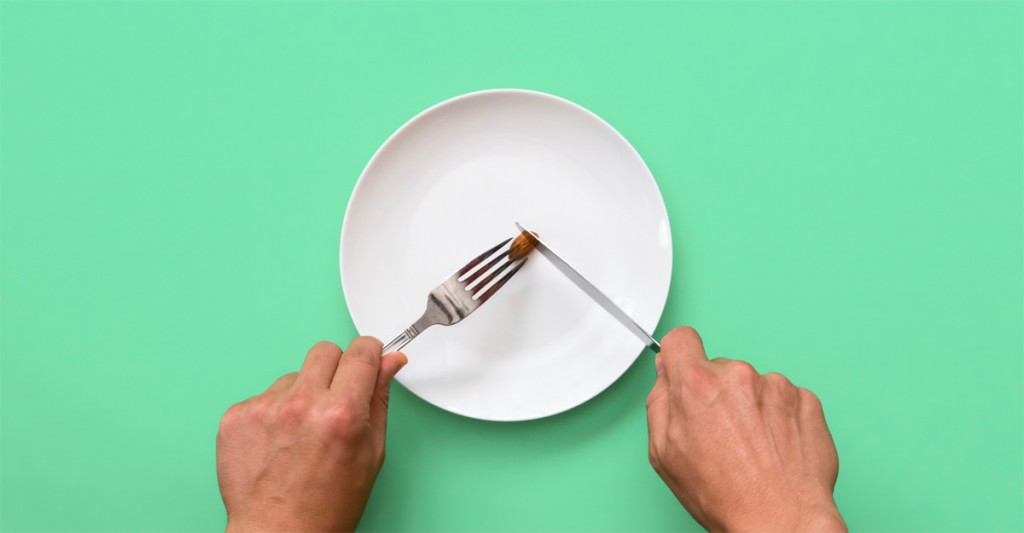 Greatist: Some of us might have a friend—or we might be that friend—who is always trying a new diet, cutting hangouts short to jet to the gym, or critiquing parts of their body. While these behaviors don’t necessarily signal a serious problem, rigid food and exercise rules, as well as poor body image, can be warning signs for a little-known class of eating disorders called Other Specified Feeding or Eating Disorder (OSFED), according to the Diagnostic and Statistical Manual–5th Edition.

One in 68 adults will develop clinical anorexia, bulimia, or binge eating disorder, but at least one in 20 have demonstrated symptoms of these disorders (even if they don’t exhibit symptoms severe enough to qualify for diagnosis) The Prevalence and Correlates of Eating Disorders in the National Comorbidity Survey Replication. Hudson J.I., Hiripi, E., Pope Jr., H.G., et al. Biological Psychiatry, 2007; 61(3): 348-358. Eating Disorder Not Otherwise Specified in the U.S. Population. Le Grange, D., Swanson, S.A, Crow, S.J., et al. International Journal of Eating Disorders, 2012; 45(5): 711-718.. It may not be the stuff of Lifetime movies and teen fiction, but battling with these symptoms can raise numerous physical and mental health risks and may, in some cases, be life threatening Mortality Rates in Patients With Anorexia Nervosa and Other Eating Disorders. A Meta-Analysis of 36 Studies. Arcelus, J., Mitchell, A.J., Wales, J., et al. Archives of General Psychiatry, 2011; 68(7): 724-731..

Here, we explore this lesser-known category of eating disorders, what causes them, and why changing disordered eating habits is both possible and important. Learning this information can mean the difference between struggling (or watching a friend struggle) with an unacknowledged illness and developing the awareness necessary for creating a healthier relationship with food.

Once termed Eating Disorder Not Otherwise Specified (EDNOS), OSFED encompasses five subtypes: atypical anorexia (in which a person has features of anorexia without low weight), bulimia nervosa (bulimic episodes that do not happen often and/or last long), binge eating disorder (binge episodes that do not happen often and or/last long), purging disorder (purging at least once a week, without binging), and night eating syndrome (consuming a large number of calories after dinner, or waking in the middle of the night to eat).

What these new diagnoses point to is the fact that eating disorders are not always black and white, and that people can exhibit disordered eating patterns even if they don’t qualify for a full-blown diagnosis.

One in 20 adults exhibits symptoms of an eating disorder, and the prevalence of dieting and disordered eating behaviors among male and female young adults is particularly high Dieting and Disordered Eating Behaviors from Adolescence to Young Adulthood: Findings from a 10-Year Longitudinal Study. Neumark-Sztainer, D., Wall, M., Larson, N.I., et al. Journal of the American Dietetic Association, 2011; 111(7): 1004-1011.. Among women ages 25 to 45 without a history of anorexia nervosa or binge eating, 31 percent reported having purged as a means of weight control, while 74.5 percent of women said concerns related to shape and weight interfered with their happiness Patterns and Prevalence of Disordered Eating and Weight Control Behaviors in Women Ages 25-45. Reba-Harrelson, L., Von Holle, A., Hamer, R.M., et al. Eating and Weight Disorders, 2009; 14(4): e190-198.. In one study on adolescent boys and young men, 17.9 percent reported becoming “extremely concerned” with their weight and physique by adulthood Prospective Associations of Concerns About Physique and the Development of Obesity, Binge Drinking, and Drug Use Among Adolescent Boys and Young Adult Men. Field, A.E., Sonneville, K.R., Crosby, R.D., et al. JAMA Pediatrics, 2014; 168(1): 34-39.. The majority of men with eating disorders also struggle with OSFED or sub-threshold disorders such as non-binging bulimia (purging without binging) Eating Disorders and Depressive Symptoms: An Epidemiological Study in a Male Population. Valls, M., Callahan, S., Rousseau, A., et al. L’Encéphale, 2014; 40(3): 223-30..

In the book Almost Anorexic: Is My (or My Loved One’s) Relationship With Food a Problem? (arguably the defining work on OSFED right now), authors Jenni Schaefer and Dr. Jenny Thomas, Harvard Medical School psychology professor and co-director of the Eating Disorders Clinical and Research Program at Massachusetts General Hospital, explore problematic relationships with food and how to change unhealthy patterns or help loved ones do the same.

“The reason that we wrote Almost Anorexic is to democratize the idea that you can have an eating disorder without meeting the diagnostic criteria for anorexia [or other clinical disorders]” Dr. Thomas says. “Most people on the street haven’t heard of OSFED, but they can catch on to what it might mean to be “almost anorexic,” which is why we came up with this new way of describing the category—to make it more accessible to everyday people.”

OSFED occurs when a person’s relationship with food, body shape, or weight interferes with their daily life.

“[OSFED] is not dieting to fit into a prom dress or running a 5K race with your friends. It’s when your relationship with food, shape, and weight is truly interfering with your life,” Dr. Thomas says.

A person with OSFED might binge eat on occasion or purge after eating a small amount of food, among other symptoms. Dr. Thomas also notes that fad diets may be making eating disorders harder to detect.

“Lots of new health trends are just dieting in disguise… People are going gluten-free or vegetarian, or they’re going on a raw food diet or a juice fast. Not everyone who has those behaviors has an eating disorder, but hiding disordered eating behind “healthy eating” certainly can increase the time until someone is actually detected as a case.”

The Causes of OSFED

“Genetics loads the gun and environment pulls the trigger,” Schaefer says, noting that this idea is used by Dr. Cynthia Bulik, professor and director of the University of North Carolina Center of Excellence for Eating Disorders.

Family, peers, and significant others can all have an impact. Parents’ verbal messages have been shown to have more of an effect on their children’s body concerns and eating habits than modeling behaviors Parental Attitudes, Body Image Disturbance and Disordered Eating Amongst Adolescents and Young Adults: A Review. Rodgers, R., Chabrol, H. European Eating Disorders Review, 2009; 17(2): 137-151.. And disordered eating behaviors, common in young adulthood, have been linked to hearing hurtful comments related to weight from family or a significant other Associations Between Hurtful Weight-Related Comments by Family and Significant Other and the Development of Disordered Eating Behaviors in Young Adults. Eisenberg, M.E., Berge, J.M., Fulkerson, J.A., et al. Journal of Behavioral Medicine, 2012; 35(5): 500-508..

The main feature that cuts across all eating disorders is feeling like your shape and weight is one of the most important factors that determines your worth as a person.

Interactions with friends can also contribute to disordered eating. College roommates’ dieting has been found to predict scores on a test that analyzes disordered eating habits and the “drive for thinness” Influence of College Peers on Disordered Eating in Women and Men at 10-Year Follow-Up. Keel, P.K., Forney, K.J., Brown, T.A., et al. Journal of Abnormal Psychology, 2013; 122(1): 105-110.. A significant other’s dieting and encouragement to diet is associated with disordered eating as well Dieting and Encouragement to Diet by Significant Others: Associations with Disordered Eating in Young Adults. Eisenberg, M.E., Berge, J.M., Neumark-Sztainer, D. American Journal of Health Promotion, 2013; 27(6): 370-377..

Ultimately “the main feature that cuts across all eating disorders… is feeling like your shape and weight is one of the most important factors that determines how worthwhile you are as a person,” Dr. Thomas says.

“The gray area between normal eating and [a full-blown disorder] is home to a great deal of pain and suffering,” Dr. Thomas says. “There are some studies that indicate that the mortality risk is just as high in people with [OSFED], versus full-syndrome anorexia.” People with OSFED are also at risk of developing clinically diagnosable eating disorders.

The gray area between normal eating and [a full-blown disorder] is home to a great deal of pain and suffering.

The prevalence of OSFED also suggests a society-wide issue when it comes to promoting and cultivating healthy body image and self-esteem. Research shows people of all genders have normalized body dissatisfaction, and the way we talk about our bodies tends to reinforce this distress It’s Not Just a “Woman Thing:” The Current State of Normative Discontent. Tantleff-Dunn, S., Barnes, R.D., Larose J.G. Eating Disorders, 2011; 19(5): 392-402.. Also, the more we engage in so-called “fat talk” (“My arms are so flabby” or “I can’t believe how big my thighs look.”), the more we feel dissatisfied with and guilty about our bodies. In a catch-22, the more dissatisfaction and guilt we feel, the more we engage in fat talk.

While not everyone who critiques their hips or reads about thigh gaps will start restricting, purging, or exercising for hours, society’s focus on weight and shape shifts the conceptual framework of health and wellness for everyone. The focus on dieting and body size ignores other health issues such as anxiety, sleep, addiction, depression, and other physical and mental factors and prioritizes appearance over holistic, personalized conceptions of health.

For those who struggle with OSFED or any other eating disorder, Schaefer emphasizes that full recovery is possible and there are many options for treatment. While individuals with OSFED may believe they are not sick enough, Schaefer is quick to counter that notion.

If you or a loved one are struggling to maintain healthy body image or a healthy relationship to food, consult these resources for help.

Interviews have been edited and condensed for clarity.