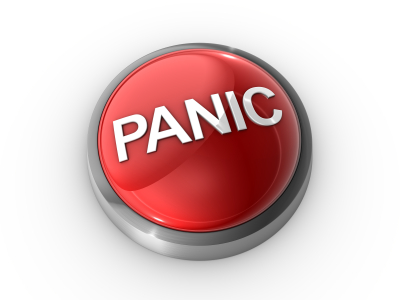 The morning of my heart attack took place about seven months ago. It started off like any other day; I had no clue what I was in for over the coming hour.

It was my typical morning routine: shower, protein shake, write up an email broadcast and say good bye to my wife and kids. I grabbed my mobile command center (the backpack with my workout clothes and Mac Book in it) and headed out the back door.

A few details to set the scene…

It was a typical Southern California day, sunny and beautiful 72 degrees. We have a detached garage on the other side of the property, and above the garage is our guesthouse. That’s where I keep my drum set, where the wife keeps her crafts and also where we store all of the clothes and toys that the kids have outgrown.

As far I can remember no guest has ever stayed in the guesthouse.

That morning, as I was walking across the pool deck headed towards the garage I realized that I had left my Ultimate 81s upstairs in the guesthouse the night before when I went up for an impromptu drumming session.

And since I would be training legs later that day, and since I squat best with my Ultimate 81s on, I headed up to grab them before leaving for the HQ.

When I walked into the guesthouse I felt fine.

It was Monday, and Mondays for me are typically a little more intense, but as far as I could tell there was nothing out of the ordinary. I mean I did have a few things on my mind, business stuff mostly, but nothing that I would call “high stress” or heart attack provoking.

Once inside the guesthouse I started to feel a little light headed.
I didn’t think anything of it.

I figured if I just stood there, in place, for a moment it would pass.
All of the sudden my heart started to race.

I felt my throat start to close up.

What the hell is happening to me?

I kept dry coughing trying to clear my throat to no avail.
Then, the worst of it hit me.  The fingers on my right hand started to tingle and go numb, and it worked its way up my arm and into my shoulder.

It was like my entire right arm was paralyzed.

I’m having a heart attack!

All I could think about was that I’m 37 years old, in my prime and I’m going to die here in this guesthouse and no one is going to find me until much later in the day.

See, because our guesthouse is way on the other side of the property and it’s not a place that my wife or kids use often so it was likely the last place anyone would check for me if I turned up missing.

The whole time I was thinking about two things:

This is NOT how I wanted to die.

So I decided that if this is how I was going to go, at least I was going to make my way down the stairs and across the pool deck so that my family could find me and possibly call for help.

As I turned toward the door and got to the top of the staircase I paused to re-think my plan one more time before executing it.

Could I really make it down the entire flight of stairs?

Who cares, I’d rather tumble down the stairs then be found dead up here. And with that thought I held on to the railing and took my first step down.

I paused, took a deep breath, I got some fresh air in.

I went down another couple steps, paused, and took another deep breath.

Was I starting to feel better?

My racing heart was slowing down a bit, I could feel my throat opening up and I was no longer light headed.

So I sat down on the fourth step from the top, hung my head between my legs, and tried to get an idea of what was happening to me.

“Okay, breathe, you’re okay dude, maybe it was just a small heart attack, or maybe it was something else altogether”, I said to myself.

By this point I had pretty much gained my composure and was feeling 80% like myself.

So I slowly stood up, went back upstairs and grabbed the shoes, that I went to get in the first place, along with my backpack and made my way down the staircase and into the garage.

I never went back inside the house. I didn’t want to worry the wife and kids. I was feeling better and wanted to find out what the heck was going on with me.

When I got to the HQ there was no “hi” or “hello” – I just beelined it into my office, pulled out my Mac Book and called up Dr. Google.

All signs pointed to a major anxiety attack which was confirmed days later by a real doctor.

I always thought anxiety attacks were something that others had, not me.  But there I was, having an anxiety attack and feeling like I was about to die in the prime of my life.

That was a reality check for me.

I had more stress in my life than ever before and I didn’t even know it until it hit me like a ton of bricks… or in this case, a heart attack.

It’s funny because here I was the guy who tells his coaching clients to take massive action and that action alleviates anxiety, yet I had allowed stress to pile up in my life and I didn’t even know it or maybe I was unwilling to deal with it.

Four days later I sat down and wrote out what the big stresses were in my life and what I was going to do immediately to resolve them.

Within the next nine days I had made some major decisions. Big decisions, the right decisions, albeit hard decisions and I felt like a million pounds had been lifted off my shoulders.

It’s too bad that I had to think I was having a heart attack to bring attention to the stresses in my life. Stresses that were fixable but I chose to ignore them because the act of taking action on them would rock the boat in ways that it had never been rocked before
I regret not having made these decisions sooner.

But I don’t regret the lesson I learned that morning when I thought I was having a heart attack.

The big lesson I learned was to deal with things NOW, no matter how big and scary they are.

I hope you never have to deal with an anxiety attack. It’s no fun at all.

Hopefully my experience is lesson enough for you.

[Ed. Note. Bedros Keuilian is the embodiment of the American Dream. Arriving in the United States from the communist Soviet Union back in 1980, his family went from being broke to eventually adding value to their new community. Today, Bedros helps over 45,000 fitness experts grow their businesses.  Bedros knows the American Dream is NOT dead, because he is living it right now. So are the folks in this inspiring video – watch it now.]
Posted in Family, Fitness, Health, Lifestyle, Self-Improvement, Spirituality
This error message is only visible to WordPress admins