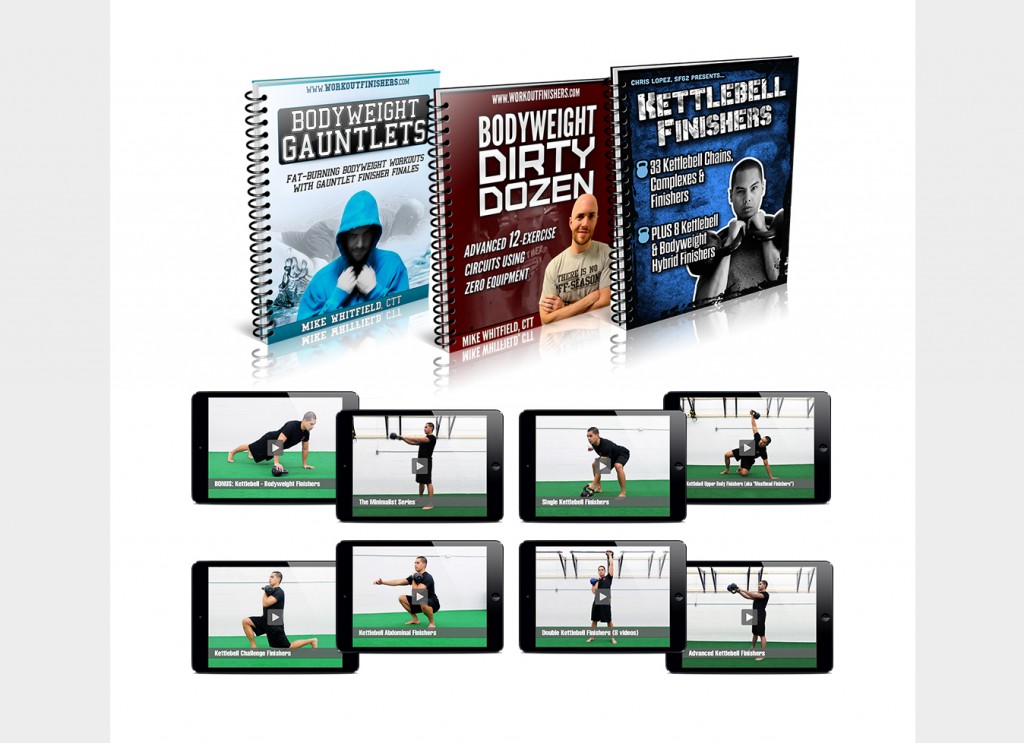 The best bodyweight workouts will include everything.

3)    Metabolic Finisher <= Your workout grand finale… here, you’ll replace cardio and intervals with a finisher because they only take 10 minutes or less.

But where most people get it wrong is that they lack one or more of these three fat-burning methods.

When you use all three strategies in one workout, you’ll burn fat during and after the workout, plus you’ll get the benefit of improving your overall fitness.

Most bodyweight programs lack at least one of these three strategies. Instead, you end up doing Jumping Jacks the entire time and so you won’t hit a lot of muscle, which is really the secret to the afterburn and putting your metabolism in 5th gear.

Another mistake? You end up doing the conditioning first.  This destroys your efforts when doing the strength training.

Look, you won’t be able to get as many Spiderman Pushups when you’re low on gas and still recovering from doing 100 Jumping Jacks. It’s just how your body works.

So, it’s important to do the strength training first.

But how do we use strength training with just bodyweight?

Let’s take a look at the bodyweight squat. It’s a great exercise, but for a lot of people, it’s not challenging enough to be considered a “strength” exercise. Ideally, it’s best to put that in your bodyweight conditioning circuit.

Instead, you’ll do a Bodyweight Split Squat, using the 1-1/2 rep method. You’ll challenge your lower body muscles more using this approach, and it should be early in your program. Here’s how to do it:

Standing in a split squat stance, lower yourself until your front thigh is parallel to the ground, then come halfway back up, PAUSE, then go down again. Finally, come all the way up. That’s ONE rep.

Compare 8 reps of the 1-1/2 split squat with the bodyweight squat, and you’ll see what I mean.

So, early on the program, you’ll want to use non-competing supersets or circuits with harder exercises.

For example, here are the first two exercises of Workout A from my Bodyweight Gauntlets 4-week program:

A Prisoner Jump Squat is certainly tougher than your standard Prisoner Squat. The Triple Stop Pushup is whole new level of awesome for your classic Pushup exercise. That’s when you pause for one second halfway down, again at the bottom and again halfway up. You’ll pause 3 times, hence the name, “Triple Stop”.

Once, you get your strength in, then it’s time to hit your conditioning.

You’ll use a variety of density circuits and more. Here’s a simple conditioning circuit:

You’ll hear your heart pounding in your ear, and that’s just cool. Seriously, this is where your overall fitness goes through the roof. If you’re advanced, you can do each exercise for 40 seconds.

Finally, you’ll finish off your bodyweight workout with the best grand finale of all… the classic metabolic finisher.

Here’s a gauntlet fisher from the same program. “Enjoy”. Ha. I put that in quotes (on purpose). A gauntlet is when you assign an exercise or a variation of an exercise as the “gauntlet”

Do the following circuit as many times as possible in 4 minutes, resting ONLY when needed:

Mikey “I use Finishers So I Can Eat Pancakes” Whitfield, CTT

Get the best bodyweight workouts ever here…

Plus, 31 finishers using one tool that burns 20 calories per minute!