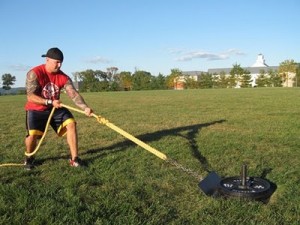 In part 2 we learned from veteran body builder, Jason Ferruggia  the importance of including mobility and flexibility exercises into your workout routines.

Today, Jason will share more tips as he explains the different types of sprinting techniques.

CRAIG BALLANTYNE: Remember when you trained Hyson?  Maybe tell us briefly on how his program was back then, and what you would do now to change that program.  It’s been like two years or something.  What would you have changed in his program to keep getting him those awesome results?  You use a new style of Renegade training.

JAY FERRUGGIA: Yeah, that’s a good question actually.  He was doing three days.  So he was doing upper, lower, upper because he was running a few days a week as well.

JAY FERRUGGIA: Not jogging.  He was running sprints.  But yeah, it was a park he found in Brooklyn that had pretty good hills.  So he was doing hill sprints.  But what I would have him do now is probably, the diet would be something different first and foremost.  Back then – I’m trying to remember exactly what we had him – this was two years ago, so I was still doing a more traditional six meals a day type deal.  We were doing carb cycling and calorie cycling.  But I would trim that down.  I would either have him use an intermittent fasting type approach, which I have kind of my own unique spin on that I’ve been using, over have more time between meals.  Most people I’ll have do one of those two.

So we’ll have three meals a day, but there will be five to six hours between each one.  Have him kind of just sit down and determine what approach.  But I’ve found better success with those.  And most people don’t have time to eat six meals a day, or the desire.  So either of those two approaches ends up being three or four meals, usually three – maybe a workout shake or something like that.

And then for the training I would probably definitely have him do four days.  The fourth day, just off the top of my head we’d probably have him do another lower body day.  If he was doing upper, lower, upper I’d probably throw in a lower body day in there.  But since he was running sprints a few times a week and squatting the other day, that day would probably be more hip extension stuff so as not to stress his knees as much.  And we really wouldn’t want to stretch his spine as much either.  So it would probably be heavy single leg RBL swings, glute hams, back raises, glute bridges, hip thrusts, sled work, all that kind of stuff.  And then abs and whatever assistance work.

I just think that fourth day, if you’re not killing yourself and you’re being smart and making all the changes that I had previously mentioned, it definitely will help a little bit.  You’re still getting an extra day where you’re burning calories, you’re building muscle, you’re getting positive hormonal changes.  I’d have to sit down obviously and think about it all.  But those would be just kind of the general changes that I would make to it, off the top of my head.

JAY FERRUGGIA: I think most people can do it.  In the past I was trying the old school, the old super squats kind of theory of don’t run when you can walk, don’t walk when you can stand, don’t stand when you can sit down, that kind of stuff, for skinny guys or girls looking to gain size.

But I think that doing some condition actually does enhance your results.  It’s a very rare person that doesn’t have trouble gaining 10 to 20 pounds of muscle and staying lean at the same time.  Eighteen-year-old kids can do it.  But after that, unless you’re a real genetic freak, most people – and I’ve worked with a ton of regular people – they do tend to end up getting fatter when they’re trying to gain a lot of size.  Even ten pounds sometimes, they’re going to get fatter.

So I think it’s smart to always do some kind of stuff like that.  Some high intensity conditioning definitely makes it better.  It enhances your recovery, not only between workouts but your between set recovery gets better.

You’ll notice that when you start running sprints your recovery, say if you’re alternating chin-ups and military presses or something like that, just within a few weeks you’ll start to notice that between sets your drop off isn’t as much.  You’re not breathing as heavy.  You feel better.  So your workouts actually get better, your recovery between the workouts gets better, your overall health improves, you’re able to eat a little bit more, which you’re going to need for gaining that muscle without getting this fat.

And then if you look at some of the most jacked guys in the world that most people would pay to have their physique, NFL running backs or wide receivers or d-backs, they’re all running sprints all the time.  The one thing you don’t want to be doing is jogging.  That’s going to kill you.  But if you’re running I would say it’s going to have more benefit than any negative effects really.

So let’s say if you were lifting three days a week and you ran sprints two days.  If you’re training five total days, and the sprint workout is only going to be 20 or 30 minutes, most people are going to be able to recover from that.  If you really have recovery issues then you could throw those sprint workouts in right after training.  So you train 30 to 45 minutes, and then you’re already warmed up at that point so you don’t need much of a warm-up.  Sprint for 15 to 20 minutes and you’re good to go.

CRAIG BALLANTYNE:  What type of sprinting should they be doing?  Should they just be doing hills, or is there something special with the hill sprints?  Or is it okay to do sprints on a treadmill?  Or is that maybe not the best idea because you’re going a lot faster and you could hurt yourself?

JAY FERRUGGIA: The only reason that I picked hill sprints first and foremost, is just because it’s way harder to get hurt.  If anyone’s listening to this call who’s in their 30s and hasn’t sprinted since high school, the possibility of getting hurt is fairly good if you’re not smart about it.  You’re going to want to take a few weeks to work up to it.  And the first couple of weeks you’re going to do so little that it’s going to be boring.  But you have to do that to be smart about it.

If you haven’t sprinted in a while yeah, you can do flat ground. But it’s just that the angle that it puts you at when you’re doing your hill sprints greatly reduces the impact and the chance of injury.  So that’s why I recommend hills sprints above all else.

And then if you had a sled you could run with, either attached to a belt or if you’re dragging it or you have your arms extended in front of you and have attached rings or Blast Straps to it.  Again, that reduces the possibility of injury simply because it slows you down.  Or if you were pushing the prowler, the angle of your upper body would be kind of similar to what it would on a hill.

If none of those are options then obviously your only choice is to run sprints on flat ground.  I’d rather it be outside than on the treadmill.  If the treadmill is your only option, if you’re somewhere where it’s all icy out during the winter, obviously that’s better than nothing.  So you can do that.  But again, work up to it very slowly.  Start maybe 70 percent the first day, and literally only do maybe three 40-yard sprints.  That sounds like nothing, but you’d be surprised at people who get injured doing that, doing slightly above that the first day.

And keep it very minimal then just work up.  Don’t be too eager.  You’re not going to get down to five percent body fat in two weeks no matter what you do.  So take it slow and be smart, because once you get injured you’re not going to be able to train.  Then all your goals are out the window anyway.  So just real slow, a couple sprints and see how your knees feel, see how your hip flexors feel, see how your hamstrings feel.  You don’t want to tweak or pull a hamstring or anything like that.

And make sure you’re running with proper mechanics.  You do not want to be heel striking.  I see people who haven’t sprinted in a while and they heel strike.  That’s the last thing you want to do.  Make sure that the ball of your foot hits the ground, and kind of pause like a bull and pull at the ground behind you.  So you should be running pretty quietly.  If you’re just clogging along and I can hear you from two blocks away you’re going to get hurt as well.

So work on running mechanics.  Try to be quiet.  If you’re running on flat ground your heels should land directly beneath you, not way out in front of you, when you’re jogging.  That’s when you get that impact that’s just way too stressful on the knees and everything.  So all those things are real important to consider.

CRAIG BALLANTYNE:  What about if you have a car and your friend drives the car and you attach yourself to the car, like [Mandelbaum].  Is that a good way to train?

JAY FERRUGGIA: Yeah, yeah.  That’s what you and I do when we’re together.  It’s a really good way.  And then use blood for gas.

CRAIG BALLANTYNE: Yeah.  And if you’re transporting blood, where should you transport the blood in the car?

JAY FERRUGGIA: In the gas tank.  You want to use it as fuel.