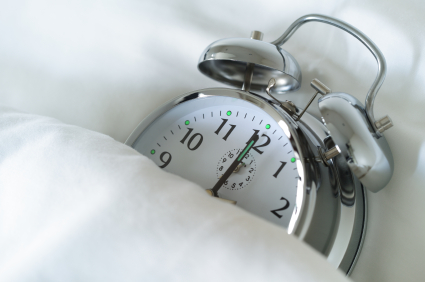 As he explained to Jerry, “Now that works out to two and a half extra days that I’m awake per week, every week. ”

Needless to say, this all goes very bad for the zany Kramer. Near the end of the episode, Kramer’s girlfriend mistakes his deep sleep as death and disposes of his body in the Hudson River. Fortunately Kramer wakes up, but he learns a hard lesson about the importance of sleep.

Now I don’t expect you to end up in the Hudson River because you aren’t getting eight hours of shuteye each night, but there are dire consequences to not getting enough sleep.

According to research from Harvard Medical School, almost 33% of American workers are not sleeping enough. As a result, they suffer from chronic exhaustion (like Kramer) and are not functioning at peak levels. Combined across the health care to manufacturing industries, sleep-deprived employees could be costing American businesses billions of dollars in lost production. That’s why large companies such as Goldman Sachs and Proctor & Gamble are investing in bringing in sleep experts like James Maas, author of Sleep for Success and Nancy Rothstein to deliver sleep education courses.

Aside from lost production, not getting enough sleep can be detrimental to your personal appearance and your health. A study, titled “Beauty Sleep: experimental study on the perceived health and attractiveness of sleep deprived people.” found that “sleep deprived people appear less healthy, less attractive, and more tired compared with when they are well rested.”

But it’s not just your looks that suffer, your health does too. According to Dr. David Eifreg, author of Retirement Millionaire, a study from Carnegie Mellon University found that people who sleep less than seven hours a night are three times more likely to develop a cold than people who get eight hours or more a night.

Dr. Eifreg adds, “Not sleeping enough can impair your brain functions (like alertness and concentration), and it can increase your risk of heart disease, stroke, diabetes, and other chronic health issues.”

Every day that you miss out on enough sleep only makes things worse.

The sleep-deprived subjects in the study insisted that they were fine and that they had adjusted to the new sleeping schedule. But the data proved them wrong.

Your goal, when it comes to sleep, should not be figuring out how to perform better while sleep-deprived. You should be looking for ways to get more sleep. Fortunately, there are proven methods to help you get to sleep faster.

Like many guidelines for successful living, the rules for getting to sleep quickly and having a good night’s rest are not sexy. But they work. Here’s what you can do to get started on sleeping better right away.

First, live a healthy lifestyle. Get regular exercise, avoid alcohol before bedtime, and eliminate caffeine eight hours before you plan to hit the hay.

Second, keep your room cool. I know firsthand from growing up without air conditioning on the farm that warm, humid summer nights would leave me tossing and turning for hours. According to David Randall’s book, Dreamland: Adventures in the Strange Science of Sleep, the best predictor of quality sleep was maintaining a room temperature in a narrow band between 60 and 66 degrees Fahrenheit (or 16 to 19 degrees Celsius).

Third, we need to power down our devices and step away from the ubiquitous screens. Stop watching television, using your iPad, or checking your phone 60 minutes before going to bed. Rothstein suggests that the light from our electronic devices can interfere with production of the sleep hormone, melatonin.

Fourth, I recommend you have a pre-bed ritual. Whether you do a brain dump, meditate or simply read a book, all of these will help you get in the physiological and psychological state required for a good night’s sleep.

Finally, and this is the tip that has helped me more than anything else, go to bed and get up at the same time seven days a week. Since implementing this advice, my all-day energy and productivity levels have been through the roof.

Of course, despite hearing this advice right here in an Early to Rise article from Michael Masterson nearly a decade ago, I resisted it. I wanted to sleep in on Saturday mornings, after all, I earned it with all of my hard work (not to mention I often stayed out late on Friday). But I was young and foolish then, and today I know better.

I encourage you to try this out for two weeks the next time your social schedule slows down. You’ll be amazed at the difference it makes.

At Early to Rise, we walk the walk. We believe that getting to bed early, waking early, and starting your workday early gives you an edge over everyone else. After all, there’s a reason our website is not called, GetUpat2pm.com. So take this advice and start getting more sleep tonight. Your health and wealth will thank you for it.