I’ve done a lot of stupid things in my life. But climbing into the backseat of a car with Bedros Keuilian driving on the wrong side of the road — in Scotland — ranks near the top. (Just kidding, B!) It was all part of my annual European adventure, and this one was the best one ever, thanks to the Keuilians and friend of Internet Independence, Barry Dunlop.

It began with a 1-day Mastermind in London, England on Friday, July 8th, which I nearly missed. My flight arrived in London on the morning of the 8th. Fortunately, the flight was on time and traffic from Heathrow wasn’t bad, so I was just an hour late.

Bedros taught until I arrived, and as a bonus, we had special guests, Andre Chaperon (from AutoResponderMadness), and Barry (from IncomeDiary.com).

That evening Barry and his girlfriend Barbara joined Bedros, his family (Diana, Chloe, and Andrew), and myself at a tiny restaurant called Mes Amis.B knew the owner’s brother from California, and we had a very special evening. The next morning we took a ride on the London Eye Tim Ferris Wheel – highly recommended.

While in London, I studied everything Bedros did and said. I took furious notes during his presentations, and watched in awe as he played the role of world’s best #1 dad.

We also spent 2 hours practicing my sales presentation for my new Perfect Life Program sales calls. Bedros is a sales master, and he has a big lesson at the end of this issue.

But there was also another sales guru for me to learn from on my trip.

Barry Dunlop has made millions as an entrepreneur and door-to-door salesman. He even spent time in Amway back in the 80’s.

He and I met in Ireland after my time in London, and I interviewed Barry about selling as we had a cup of refreshing mint tea at The Westin Hotel in Dublin.

“Barry, what made you such a great door-to-door salesman?” I asked.

“I have to say Craig, even when I started with Amway, the reason I succeeded in sales was because I was evangelical about the products. I truly believed in them. I was very confident in the product and that made me confident in myself,” Barry replied. 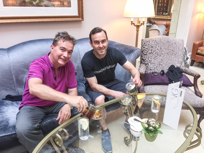 Barry’s advice is simple, but could be the advice you need to help you stop spinning your wheels and start making the sales you desire and deserve.

In addition to the work I did with Bedros, hearing those words has given me a clearer path to selling my $25,000 Perfect Day coaching program plan.

It was worth the trip for that alone.

Be an evangelical believer in your products. It doesn’t matter if you’re writing copy, filming youtube videos, creating video sales letters, getting on the phone, or going door-to-door, you MUST be confident when you sell.

“There are an infinite number of new opportunities. Actively seek them out, and position yourself to recognize and take advantage of them.” – Kekich Credo #68