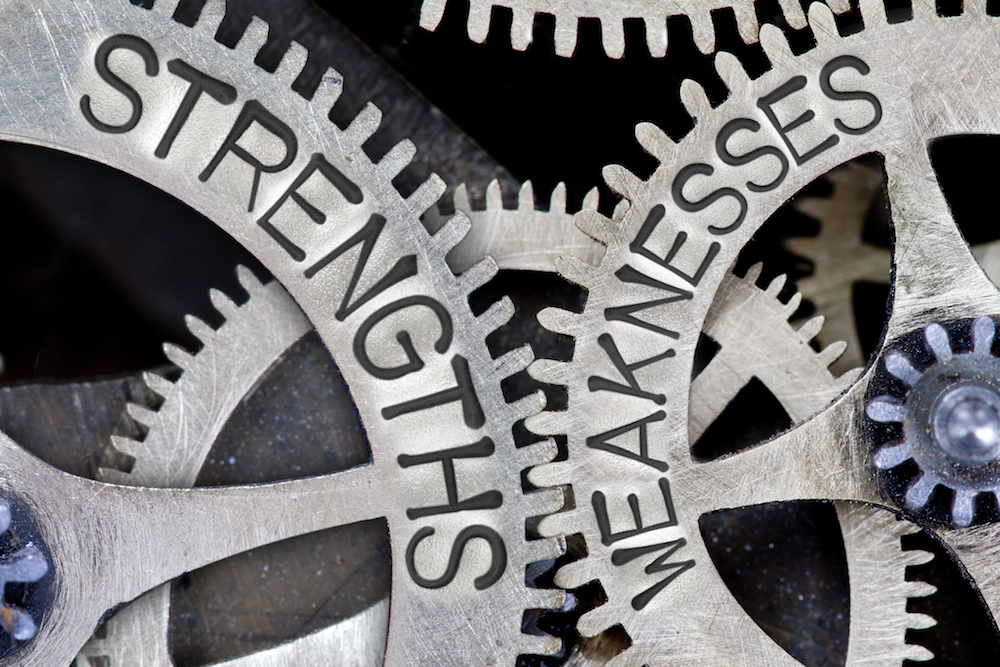 If you search Medium for “making the most of weakness,” do you know how many articles pop up?

Surprising, given the fact that most—no, all—of us are a mixed bag of incredible strengths and frustrating weaknesses.

But in a culture that values purity, perfection, beauty, wealth, and far too many impossible superlatives, you’d be hard-pressed to find a loud voice confessing to personal pitfalls.

I’ve long loathed the culture of celebrity that hovers around CEOs and corporate bigwigs in the U.S.—in large part because it cements the absolute untruth that these men and women are infallible.

They, like you and I, have had to overcome personal weakness and struggle to reach some measure of success.

Let me offer a few examples:

Elon Musk shared in an interview that, as a child, he feared being alone and unloved. That fear carried over into adulthood, rocking relationships and pushing him deeper into a work-driven life.

Steve Jobs was famously impatient and was often accused of lacking empathy. He lost employees—and fresh innovation—because of it.

Warren Buffett has confessed to being slow and sloppy—keeping team members on staff even when he knew they were hurting the company. Company growth slumped because of it.

But despite these drawbacks, Musk, Jobs, and Buffett are all considered to be wildly successful—and not just because they rake in millions of dollars. It’s because they’re committed to personal growth and overcoming weaknesses for the benefit of their friends, their families, their companies, and themselves.

Isn’t that the most valuable lesson they can teach?

Don’t misunderstand me—advice on wealth-building and productivity are valuable—but must come along with a certain measure of self-awareness that acknowledges weakness and strength. Being successful is not about hiding or ignoring weakness. It’s just the opposite—it’s about acknowledging it in a way that is constructive. From an honest self-confession comes the opportunity to build and grow.

Adam Grant, a professor at the Wharton School of Business at Harvard University, spelled this out in the context of a job interview: “By admitting your inadequacies, you show that you’re self-aware enough to know your areas for improvement—and secure enough to be open about them. [It shows] that you’re interested in being hired for what you actually bring to the table, not what you pretend to bring.”

So how did the “celebrity CEOs” I mentioned face their weaknesses?

For Musk, the journey has required him to acknowledge a traumatic childhood and how it now influences his personal relationships—and the sometimes overbearing control of his companies. (He’s been accused at times of being too personally or emotionally invested in Tesla.)

For Jobs, the task demanded acceptance of his own deficiencies with a commitment to being more empathetic and humble—not just in an abstract way, but in concrete, daily rituals. One of his greatest opportunities to do so came with the growth of Apple in the late ‘90s and early 2000s. Instead of controlling everything, he slowly began to turn management of projects over to others, like long-sung design eye Jony Ive.

And for Buffett, the path to a stronger team started with listening to his shareholders—as well as his vice chairman, Charlie Munger. His open confessions during meetings spurred action, and a commitment from Buffett to be better about personnel management. He did this so that the entire company might hold him accountable.

There’s no arguing that these men—and many other men and women who have revolutionized industries across the globe—have invaluable insight into best practices in company management, productivity, and wealth-building. But each insight must be offered with three caveats:

There are always weaknesses to overcome before success hits. That takes time. And nobody’s perfect.

Not Elon Musk. Not Steve Jobs. Not Warren Buffett.

If we continue to craft celebrity out of our CEOs, then that celebrity should be as much in awe of weakness as it is of strength and success.

Peak productivity, massive revenue, explosive corporate growth, and unimaginable innovation are all possible for us (just as they were for Musk, Jobs, and Buffett)—but not without spending some time facing OUR weaknesses.

As best-selling author Aimee Cohen once wrote, “Don’t let a weakness make you weak.” Instead, acknowledge it, make friends with it, and turn it into a strength.

Can you imagine what you might accomplish when you do?

On the great path to success is self-reflection that helps define goals as well as deficiencies; focal points as well as distractions; and achievements as well as failures. In his book, “The Perfect Day Formula,” ETR Editor Craig Ballantyne helps you take weakness and turn it into strength—all on the path to Perfect Days and a Perfect Life. Get your FREE copy of this incredible book now.