It was my final night in Munich. Most of our group had already left on long voyages back to America, but a few us had remained behind,spending one more day checking out the sights in this beautiful – and remarkably clean – German city.

At dinner that night, in the basement of the Bayerischer Hofhotel, I sat with Randy Beeman, host of The Wise Investor Show, a radio program that has been on the air for over 15 years.That’s one of the reasons that his Wise Investor Group manages and oversees more than $1.9 billion in client assets.

Let me explain. It all starts with elevating yourself with media, and then adding personality to your marketing.

It’s an OLD-school way to get more traffic, but it works!

Here’s what Randy has discovered over the years of running a radio show…it might seem like”common sense” to you and I or anyone that has studied Dan Kennedy,but it was cool to hear Randy’s story at dinner.

(Following photo is not from that dinner…that’s just a random photo of our group having lunch at Oktoberfest. Randy is hidden behind the wooden beam in the bottom right.) 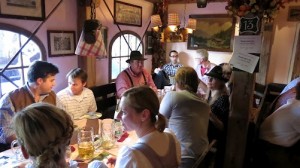 Randy started building his investment business in the late ’90s, and had the opportunity to do a short radio segment. He made the most of it, delivering great value to his listeners.

At the same time, he unknowingly used Dan Kennedy’s”Influential Writing” and “Personality in Copy” techniques to connect with his audience through personal stories.

At the annual meeting for his business, where over 500 of their clients attend, people that Randy has never met before are asking about how his daughter is doing in school. They even ask his daughter, who attends the event, how she is doing and they know her by name – even though it freaks out Randy’s daughter that all these strangers know about her.

Still, Randy benefits from this because his listeners Know-Like-Trust him. He has built the KLT factor in spades thanks to his elevation in the media, and by delivering great content each week.

I posted this on my Internet Independence Facebook page today, and it applies to all the communication that we all do.

“If you speak up online and your ideas have currency, people are going to show up and want to connect with you. What we need more of are people with the guts and emotional labour to do this. The greatest shortage in today’s society is an instinct to produce.”- Seth Godin

Randy had been doing this naturally, using radio as his medium.

Today, we have more media at our disposal. There’s Youtube, podcasts, blogging, and social media, all of which are practically free.

But don’t ignore traditional media. In fact, having a real book, doing real radio, and getting on TV are still as powerful – and perhaps even more so – than all of the free Internet media, in many cases.

Sure, Gangnam Style wouldn’t have gone Gangnam on the world without Youtube, but now Psy, the creator of that song, is bigger than ever because he is getting on traditional media like major American television shows. But the old media vs. new media debate is for another time.

Right now, we can simply conclude that you want to maximize your media exposure.

To do that, identify all of the opportunities that exist. Look into your connections, on FB and Linked In, and start telling the world that you are available for media appearances. The media is looking for experts.

For example, my entire career has been built off the foundation of working with Men’s Health magazine, and my success with them was built off my dedication to making life easier for the over-worked and under-paid editors and research assistants and fact-checkers that would contact me for tips and to review the facts of various articles.

So whatever media you are trying to break into – and you MUST do this – start by adding value.

Once you do, and once you breakthrough and get media exposure, then leverage it to the max. Get your radio show on Itunes to attract a new audience. If you film something for local TV, make a big deal about it in all of your social media work.

Maximize yourself with media.

Because at the end of the day, you’re working towards one politically incorrect truth about making money, and it’s this:

To achieve a higher income, you must first elevate yourself and your BIG idea…and the best way to do that, is through media.

“You are responsible for exactly who, what, and where you are in life. That will be just as true this time next year. Situations aren’t important. How you react to them is. You have to play it where it lies.” – Kekich Credo #58

Posted in Wealth and tagged Affiliates, Internet Independence, networking, planning, Productivity, Traffic
#repost from @motivationmafia With all the hard w