He must have stolen a few of his ideas from marketing guru, Bedros Keuilian.

Since 2010 my good buddy Bedros has been teaching entrepreneurs to use simple subject lines like, “Hey.”

Most people (even me) were skeptical.

Then in 2012 the President copied Bedros’ idea … and now big B has proof that he was right all along.

Other people raising money used similar “street talk” subject lines that you might use when emailing a friend.

These emails, with catchy and casual phrases, increased open and click rates… and ultimately donations. 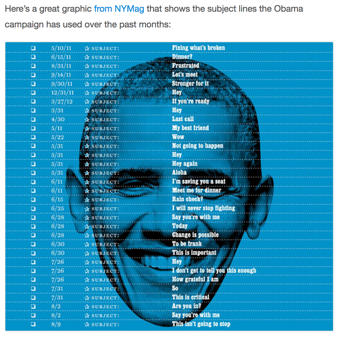 Click here for many more marketing messages from Obama

According to Bloomberg Businessweek, “Most of the $690 million raised for Obama came from direct email appeals. The more casual the tone of the email, the more money the email made. Obama’s “Hey” subject-lined messages were the most effective of all.”

Another cool lesson Obama learned was something I’ve been teaching for years. His staff of 20 email writers would test the email subject lines to his own list before getting his “affiliates” to send an email to their list.

Now before you go and start using subject lines like “Hey” or “DUUUUUDE!” (another classic from Bedros) or “Meet me for dinner” (one that President Obama sent to his list), just remember…

I would NEVER send an email to ETR with the subject line “DUUUUDE”, but it works for Bedros because he has a list of 32-year old male personal trainers.

If your subject line and content is a mis-match, you’ll just tick people off.

Marketing legend David Frey says a reason why Trump won the election is because he was a better marketer and had a better message-to-market match, whereas Hillary never had a good message and didn’t match her efforts to the audience.

You can argue the reasons for the outcome all night, but I think that one is true.

And they will come to know-like-trust you.

That’s how you build a business on email marketing.

“Customers buy from us based on simple self-interest, because of product features and benefits, guarantees, salesmanship, etc., but they BOND with us based on our own emotional disclosure and demonstration of character, values, philosophy, and humanity that they respect and identify with,” said my mentor, Dan Kennedy.

“This is the difference between making a living from transactions, and creating equity by relationship. I differentiate between Sales (Copy) Writing and Influential Writing this way: The first drives transactions, the second creates, builds, and preserves equity.”

Bottom Line:
Know your reader. Keep your emails simple. Build your relationship with them.

And be the person they want you to be.

Oh, and always remember, Bedros is always right when it comes to email marketing!

… our next 2-day Mastermind in New Orleans in January.

This is a special offer we’ve NEVER, EVER made before.

Click here for more details on this special event