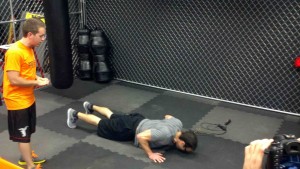 It was one of the toughest moments of the weekend… or 2012 I should say. Craig put me through a nasty 20-10 workout that had me bent over in exhaustion. I was questioning the meaning of life and even hallucinated a little bit.

I was seeing Yoda wearing a bright orange shirt instructing Craig through some burpees.

Alas, I was not hallucinating. It was Certified Turbulence Trainer Brian Kalakay taking Craig through a brutal bodyweight finisher.

Revealed the burpees were.

But seriously – are these short bodyweight finishers worth it?

Let’s find out. I’m sure you already read the study that Craig sent out to you recently, but just in case, here it is:

22 college-aged women did 4 workouts per week for 4 weeks in one of three groups.

Group B did 8 rounds of 20 seconds of a single bodyweight exercise (burpees, jumping jacks, mountain climbers, or squat thrusts) with 10 seconds of rest between rounds.

Group C did nothing (they were the non-training control group).

Both training groups increased their aerobic fitness levels by the SAME amount (about 7-8%). That’s right, the short bodyweight workouts (of 4 minutes) worked just as well as 30 minutes of cardio. Wowza!

I don’t know about you, but I’d rather spend a high intensity 4 minutes to keep off that ugly 105 pounds I lost then waste my time doing mindless cardio for 30 minutes (or longer), especially this time of year when I’m really busy with the holiday season approaching.

So, instead of boring cardio after your workout, you can knock out this fat-punishing finisher to burn more fat in less time. You can also do this on an off day to keep your metabolism revving like a … I don’t know… something that revs a lot.

The best part?… it requires ZERO equipment. Using finishers like this will keep you from gaining the usual 8 pounds this time of year.

No way… not this year. This is THE YEAR you don’t let it happen.

Do the following circuit as many times as possible in 4 minutes, resting only when needed.

Now you can hang with Grandpa.

These bodyweight finishers will be your secret weapon this year. In fact, I bet you could start 2013 leaner than you are now by using finishers like this.

Let’s face it; you can’t fight Aunt B’s sweet potato casserole. Wait a second. That’s me. But you already know that you’re going to be consuming more calories than usual this time of year. While these finishers won’t allow you the “all-out” approach, you can certainly get some wiggle room by using these short, but powerful finishers with your workouts and on off days.

Why do you think I can get eat pancakes and keep off my 105 pounds of fat I’ve lost?

Now you can get 39 Bodyweight Finishers PLUS 8 weeks of Bodyweight workouts for just $20 this week. It’s like your bodyweight holiday package.