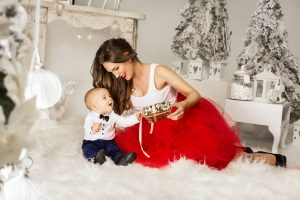 You might know the name Barbara Corcoran. She built a real estate empire in New York City, sold it in 2001 just before 9/11, and today is one of the famed panel on the television show, “Shark Tank.” But in my opinion, what she did in 2005 yielded the biggest lesson she can teach us.

Corcoran has two children. Her youngest, Katie, age 11 was adopted in 2005 after Corcoran chose to follow an unusual adoption strategy. She used the copywriting skills that she had perfected while writing sales descriptions of dream homes in Manhattan.

“Attracting moms who wanted to give you their baby was exactly the same as writing a good real estate ad,” said Corcoran in an article in Inc. magazine. “You needed a great top line, and my top line I used in every Pennysaver in the Catholic states was ‘I want your child to ski in the winter and spend summers at the beach.’ Sort of like the baby version of ‘views and lots of light,’ ” she said. “It’s all sales. I think I had 27 moms who wanted me to take their babies — and it’s not easy getting a baby in America.”

Gary Halbert, a famous copywriter, once said, “Every problem can be solved with a good sales letter.”

So yes, as the title of today’s article promised, you can use marketing to find wives and children — but also to find great employees, and most importantly, customers for your business (no matter what type of business you have — a brick and mortar location, like the gyms I own, or an online business like EarlyToRise.com or TurbulenceTraining.com).

Let’s look at what makes marketing work for finding the right prospects. There’s a lot to learn from studying Halbert’s personal ad. Here are the pre-headine, headline, and first two paragraphs.

Are you more than just a pretty face?

Generous Creative Businessman Wants to Find a Hot, Sexy Woman with a Good Sense of Humor

Are you a soft, sexy, exciting lady who would like to have a taste of “part-time paradise?”

My name is Gary and I am looking for a very special woman who would like to share a few small (but exciting!) adventures with me and who wants to enjoy a part-time slice of the good life. Are you that woman? Maybe, maybe not. The first thing it depends on is me. You see, if I’m not your kind of guy then what I have to offer may not be your idea of how life should be lived.

So let’s start with me.

You can read the full letter here

Notice that Gary is not afraid to repel the wrong person to attract the right person. Neither was Corcoran in her marketing for homes or mothers looking to let someone adopt their child.

But being afraid to repel the wrong prospect is a mistake that most novice marketers make.

When I was starting out, I feared offending anyone and thought my product was for everyone. I would curtail the strength of my copy when an imperfect prospect would criticize it.

The worst words to pay attention to, from someone outside of your target market, are:

Of course it’s too long for someone that is not interested in it! A person that has never exercised, and has no interest in doing so, and prefers to smoke themselves thin, would never make it through the first 30 seconds of an exercise infomercial. But that’s not the target prospect for Tony Horton and the marketing team at BeachBody.

However, if you put good, long copy (or an infomercial) in front of the right, targeted audience, you can keep their attention for thousands of words — or for 30 minutes of television.

Holding back, pulling punches, and refusing to repel the wrong prospect is a classic, yet massive mistake made by many marketers.

It’s what holds you back from making a deep connection with your prospect. It stops them from liking you and trusting you, because when you hold back and generalize, your best prospect feels that you don’t understand them or their problem.

Unlike Corcoran, who ran a short, but straight-to-the-point ad in a Pennysaver direct mail piece, Halbert had room to ‘romance-the-stone’ with a longer, storytelling ad.

He told the reader everything they needed so they could get to know him immediately. He described his morning routine to the minute. He admitted he was a workaholic and that he lived a monk-like life (no alcohol, no drugs, no ‘rock-n’-roll’).

He shared everything, ‘warts and all.’ By the time readers have gotten to this point, they know precisely whether they like him, trust him, and want to get to know him.

He spends the second half of the letter going through, in great detail, what he does NOT want.

Whereas Corcoran’s ad relied on the power of this one visual for mothers, ‘I want your child to ski in the winter and spend summers at the beach,’ Halbert’s ad listed seven — SEVEN! — things Gary did not want in a woman.

He disqualified many women. He was willing to repel in order to attract.

This is how he separated the right woman from the wrong women.

Tomorrow you’ll discover just how deep you need to go into the demographics and psychographics of your target market in order to make a powerful connection in your sales letters that will drive your prospect to buy your solution to their problem.

You’ll meet my friend Mark who I’ve known for 16 years but that hasn’t aged a day.

Until then, read Gary’s ad. It’s from a bygone era and probably wouldn’t be accepted into newspapers today, but there are many marketing lessons in it that will help you write better sales scripts and ad copy.

Posted in Entrepreneur, Self-Improvement, Wealth
This error message is only visible to WordPress admins