By the time you get this I should be stumbling off a plane in Vilnius, Lithuania. Hopefully Simon Black will be there to greet me. Or else it’s going to be very, very awkward.

And then later this week we’re off to the BlackSmith camp with 50 future world-changers. It’s going to be amazing.

But for now…let me show you how to make some money on FB, it might help pay for your own trip around Europe.

If you’ll remember back to the other week, I told you about Facebook‘s somewhat bizarre strategy of making you pay to communicate with your fans.

Remember, these are people who “Liked” your page, and yet when you post on your Fanpage, it only reaches about 25% of your fans.

I’m serious. How messed up is that? Why is Facebook not sending the info to the people who “Liked” your page?

Looks like FB is following the Golden Rule (well, at least this version: “He who has the gold makes the rules“.)

So is it worth it to invest money in this scheme?

My recent experiments suggest post promotion can be profitable, and I’m going to share those results in this week’s issue of “What’s Working Wednesday“.

Here’s what I did:

(Normal posts tend to reach only 3500 people. But for $52, Facebook promised my message would get in front of an extra 5000 TT fans – spread out over the next 3 days. NOTE: You don’t have any control over the delivery of the promoted post.) 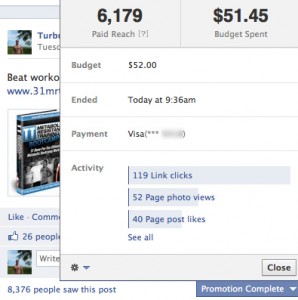 3) From the 119 clicks, we had 4 sales and 5 upsells (as measured through specific Clickbank tracking).

6) The ROI was almost 7 to 1. Now the total was not enough to pay for my flight to Europe, but it should take care of my hotel bill and a fun night out while in Copenhagen on Friday, Aug 3rd.

I’m going to use at least one promoted post each week to feature a product or even a free report.

If you have a Facebook Fanpage with a few thousand fans, consider running a promoted post, track the results, and see if this doesn’t add another element of profitability to your business.

Let me know your results,