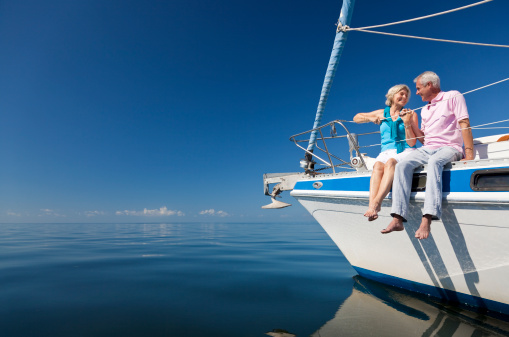 “I want to get rich.”My friend Dean and I were out for a drink the other day. He recently quit his job. It was a stable, six-figure government post. But it was boring… and there wasn’t much “upside” beyond his current position.If he’d stayed, he would have ended up doing the same thing, earning about the same money, for the next 30 years.He knew he couldn’t live with that, so he walked away. He took a job with a small, fast-growing company. “It’s a lot more fun than government work,” he says. “But I’m not making nearly what I used to.” So he feels like he’s a lot farther away from getting rich.Here’s the thing: If he takes some ideas to heart, Dean has a much better shot of becoming rich now than he did before. And you can get rich, too, if you follow Dean’s path.Before we get to the details, there’s one thing I need to make clear…

When Dean says he wants to be rich, he’s not talking about becoming a billionaire. He doesn’t need a fancy car collection or a 10-bedroom mansion. He drives an eight-year-old motorcycle. He wears old Converse shoes. He’s happy with both.

“I don’t want a yacht,” he told me. “I want freedom.” He wants to be rich enough to afford to live where he wants, to spend his days doing something he enjoys, and to not worry about money.

By that definition, he can be rich in five years or less. Here’s how…

The first thing Dean did was quit a dead-end, no-growth job and take a risk in a new line of work. And here’s the important part: His new industry is just about as close to the “ideal business” as possible…

Now obviously, the ideal business doesn’t exist and probably never will. But if you’re about to start a business or join someone else’s business or if you want to buy a business, the following list may help you.

The more of these criteria that you can apply to your new business or new job, the better off you’ll be.

You can (and should) read Russell’s full essay for free right here. But I’ll give you some highlights…

– The ideal business leaves you with free time. High-powered investment bankers might work from 6:00 in the morning until 8:00 at night. That’s not ideal.

– The ideal business is interesting. It’s something you can do every day and still enjoy it.

(I urge you to print off Russell’s essay and read it several times. It’s one of the most valuable things you or your children could ever read.)

Dean’s new job is in publishing… It might not be the perfect business. But it’s close…

He can do his job from just about anywhere in the world. In fact, in a few weeks, he’s leaving town to go live on a small island in the Pacific… His job will leave him enough time to finish a business degree at a top-10 school…

His job is interesting. “I learn something new every day,” Dean says.

In other words, Dean’s job has a lot going for it. He might be earning less than he was at his government post. But he’s a lot closer to his definition of rich – living where he wants, spending his days doing something he enjoys, and not worrying about money – than he was before. If he’s smart about this job, he’s going to be in MUCH better shape in a few years, especially if he adds this second big idea for becoming rich. It’s one of the single greatest secrets of wealth building, and if you apply it to your career, it’s one of the fastest ways you can build significant net worth.

Idea No. 2: Take Advantage of “Compounding”

It’s a “snowball” effect. It starts small. But with each new layer, it grows exponentially bigger. Eventually, you’re earning multiples of your original investment.

You can do the same thing with your job. My friend and colleague Mark Ford explained it best in an interview he gave a few years back…

1. You have to start doing more valuable work.

According to Mark, that means one thing: producing long-term profits. Even if your job isn’t in sales, you need to do everything you can to make sure you’re contributing to the company’s bottom line.

As Mark says, you need to “transform the work you are doing now in such a way that it will produce those long-term profits. The better you can do it, the more money you will make. It’s as simple as that.”

Dean is in a position where he can use his work to directly increase sales. If he gets good at that, he’ll be well rewarded.

2. You need to make sure the folks who can give you a big, 10%-plus raise know that you’re worth it.

The way to do this is to become indispensable. Mark says to make a list of things you can do to increase your value to your boss. Then start working through the list, one by one.

In January, for example, you might make it a point to get your boss his most important report a day earlier than normal. In February, you might tell him he can delegate to you the sales calls he hates to make.

Eventually, your boss will start assigning you more responsibility. And according to Mark, “he will see you as an entirely different and more important employee than any of the others he deals with.”

Dean just moved to a remote tropical island, thousands of miles away from his business’ headquarters… So he’s going to have to put in extra effort to make sure his boss and his boss’ boss know what he’s up to. However, that effort will be worth it if he gets a 10% raise this year and maybe another one the year after that.

If he can increase profits and make himself valuable, his salary could double in five years. That’ll put him well over his old government salary… and there will still be plenty of upside left.

A much higher salary will make it easier for Dean to live the lifestyle he wants without worrying about money.

[Ed Note: A graduate of the University of Chicago, Amber joined Stansberry & Associates in 2006. She studied investing and trading with S&A analysts such as Dr. Steve Sjuggerud, Jeff Clark, and Dr. David Eifrig. In 2011, she began writing DailyWealth Trader. Since then, she has compiled an impressive track record, and DailyWealth Trader has become one of the world’s most popular daily advisories. You can learn more about a 100% risk-free trial of DailyWealth Trader right here.]