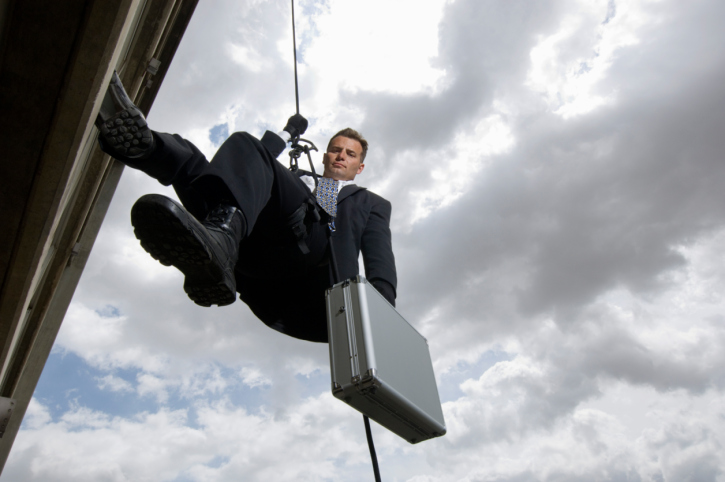 If there’s one thing I could tell every graduating student, this is what I’d say:

Jobs suck. At least the traditional version of a job, in which you do something you sorta hate, from 9-5, and are paid for your time to just grit your teeth and do it. Let’s call this the “sell your time” version of a personal business model: You sell your time to an employer, and they pay you for that time.

There’s so much conflict stemming from the fact that this is the predominant mode of work in our society. All the hand-wringing about work/life balance, finding what you love, kids versus work, etc. – an important source of these anxieties come from the fact that a “sell your time” model of work means you’ve set your personal time (and goals) in direct conflict with the time you have to sell for work.

There’s a better way – though it might not be the easiest way. The key is to find a way to stop selling your time, and to find another business model instead. And the important aspect of this personal business model is that you’ll be able to make money even if you are sleeping.

1) Learn to make something. Anything

First and foremost, I think it’s important to learn to make something. Anything. It could be an app, blog, table, YouTube channel, video tutorial, or anything else. Then study the people who have become successful enough to support themselves in this craft, and study them, copy them, stalk them, and meet them.

It always shocks me when people don’t really know how to make anything. Or haven’t ever tried. It’s something we’ve all done as kids – drawings, crafts, etc. – but somehow a very large number of professional workers find themselves in a state where they only know how to repackage other peoples’ work rather than doing anything themselves.

2) Create a feedback loop with your audience/customers

Remember that the end goal isn’t to make art, it’s to get out of selling your time for a living. So even while you’re learning to make stuff, you’ll want to learn how to make stuff that people actually want. This means you need to create a feedback loop between you and your customers, whoever they may be. This means you’ll want to constantly show people your work, no matter how bad it is. You’ll want to try and build an audience, or a customer base. Again, this is a skill in itself and may take years to figure out.

It’ll also be an opportunity to find small wins in what you do- whether that’s improvements in craftsmanship, or from finding an audience for your work. This kind of positive feedback will keep you going.

It’s been discussed endlessly in books like Malcolm Gladwell’s Outliers, but it takes years of solid practice to be any good at anything. And then 10,000 hours (roughly 10 years) to become a world-class expert.

But even before you sink years into something, you’ll get frustrated much earlier on because you’ll think that you suck at it. There’s a great quote from Ira Glass (of This American Life) about the difficulty of getting good at anything, starting as a beginner:

“What nobody tells people who are beginners — and I really wish someone had told this to me . . . is that all of us who do creative work, we get into it because we have good taste. But there is this gap. For the first couple years you make stuff, and it’s just not that good. It’s trying to be good, it has potential, but it’s not.

But your taste, the thing that got you into the game, is still killer. And your taste is why your work disappoints you. A lot of people never get past this phase. They quit. Most people I know who do interesting, creative work went through years of this. We know our work doesn’t have this special thing that we want it to have. We all go through this. And if you are just starting out or you are still in this phase, you gotta know it’s normal and the most important thing you can do is do a lot of work. Put yourself on a deadline so that every week you will finish one story.

It is only by going through a volume of work that you will close that gap, and your work will be as good as your ambitions. And I took longer to figure out how to do this than anyone I’ve ever met. It’s gonna take awhile. It’s normal to take awhile. You’ve just gotta fight your way through.”

The period where your taste outpaces your ability to produce it is a hard one. You know your goals but don’t quite know how to fulfill them. That’s why it’s easier to be a film critic rather than a film director.

The point of all of this isn’t to do it alone. In fact, you’ll find that it’s rare you can do something substantial by yourself. Instead, the above feedback loop most usually involves teams of people, at least once the basic groundwork has been done.

Technology startups are a perfect example of this- it exemplifies the process of getting a bunch of smart people together to learn and make something valuable for the world. It’s a remarkable thing to get the experience of creating something from scratch, and seeing it through to its success in the market. But even if startups aren’t right for you, and  you choose to write books for a living, in a success case you’ll work with editors, research assistants, other writers, etc.