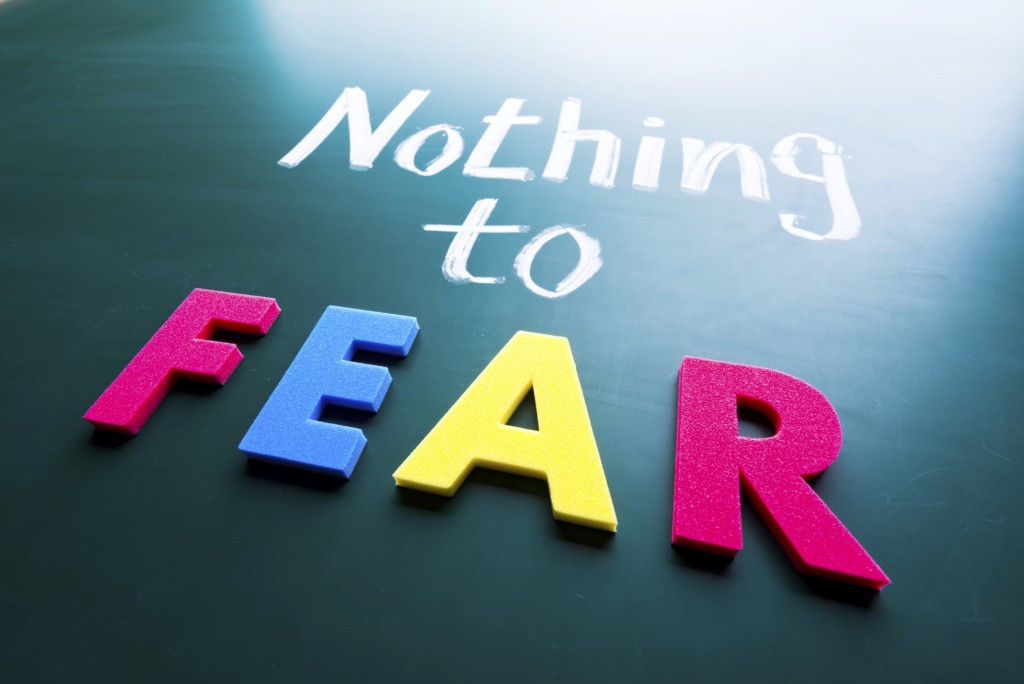 I was about seven years old the first time I remember being scared to death.

I was sitting in the school cafeteria with my friend Daryl eating lunch. I’m pretty sure I was eating peanut butter and jelly, unless it was during one of those “healthy” periods when my mom was sending us to school with carrot and raisin sandwiches (long story).

I believe I was also eating a yogurt. And when I realized I had forgotten a spoon, I walked up to the front of the cafeteria, got one, and brought it back to my seat.

For some reason, I got it in my head that trying to bend the spoon would be a funny thing to do. I’m not sure if I had seen someone on TV do that or if I was working on a magic trick (I was a magic trick nerd as a kid) involving spoon bending.

At any rate, I tried to bend the spoon. And wouldn’t you know it, it didn’t bend.

Instead, it broke… in two pieces.

I started laughing that nervous kind of laugh you do when you’re not sure what to do next. My “friend” looked over at me and said something like, “I’m going to tell the cafeteria ladies that you broke the spoon…”

At that point, my memory is blank. I really have no idea what happened after that. The power of the fear that hit me in the moment I thought I would be “reported to the authorities” was enough to blank everything out.

To the best of my knowledge, the fear I first felt that day has never left me.

Over the years, my relationship with fear has changed. At first, I was completely unaware that it was running my life.

Fear controlled me like a puppet. It pulled the strings. Walk here, say that, do this.

As I grew older, I began to treat fear as an adversary. Something to be fought, controlled, managed, and overcome.

I can say that fear has been a companion in my life longer than any person. It is always there, at some level, reminding me of things I need to learn.

You look out at the world, but you forget to enjoy the fullness of the world looking back at you. You are able to exist but you are not able to truly live.

How to Deal with Fear

First, get clear on what fear is at its most basic level. Fear is little more than energy. It is the same energy that powers every other part of your body and your life. This is neither good nor bad.

Second, understand that fear does not mean that you are “broken.” You are not broken. You are not a piece of factory garbage that somehow made it out of the quality control department without inspection. Who you are is the person you were intended to be.

Fear is part of that person. It is a part of who you are. So investing time and effort “trying to get rid of it” doesn’t totally make sense. In my experience, it also doesn’t work. In fact, the harder you try, the worse it gets. That’s because by directing more energy at the issue, you are only feeding it.

Third, if you are filled with fear, understand what that means about the stores of energy you have available to you to move forward towards your goals.

The fact is, you have enormous stores of energy available to you for your journey. Fear is proof that is true. Fear is an enormous source of energy. The trick is to use that consciously rather than unconsciously.

So what’s to be done about fear?

As Robert Frost says, “the best way out is always through.”

You don’t need to kill fear or “get rid of it.” After all, it’s part of you. Instead, you need to look directly at it and say, “that is part of who I am at this moment.” OWN that. Accept it.  And then move forward in the direction of your goals.

Stop looking for relief from fear and simply start living your life.

[Ed. Note: Jason Leister is a direct response copywriter, internet entrepreneur and editor of the daily e-letter, The Client Letter, where he empowers independent professionals who work with clients. He has six kids and lives and works by the lake in Minnesota.]
Posted in Careers, Lifestyle, Self-Improvement, Skill Development, Wealth, Work
This error message is only visible to WordPress admins