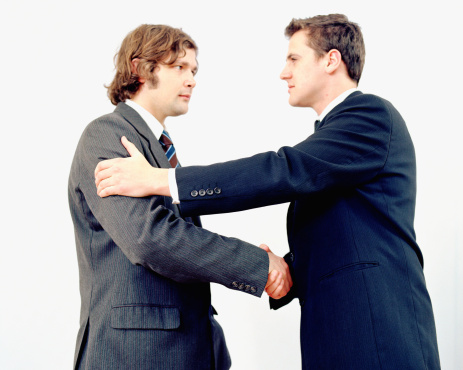 Everybody negotiates all the time. It’s part of everyday life. But most people just don’t have what it takes when it comes to getting the best personal outcome. They get jittery. They squirm. Some are stretched so far beyond their comfort zone they can literally feel ill.

But in business being able to successfully close deals makes the difference between winning and losing; between building a career or getting fired. Whether you’re an aspiring entrepreneur, a corporate manager or in sales you need to always know how to negotiate from a position of strength. If you need something from the other guy, you’ve already lost. People want what they can’t have. Become the thing people want.

If it doesn’t come naturally, the good news is that it’s a skill that can be acquired. So let me give you some of my basic tips that will make you a successful closer.

1) The Power of Persuasion & Passion

First of all, a passionate belief in your product or service gets you a long way. Customers aren’t dumb. They can tell when you have sincere conviction, or whether you’re just trying to hoodwink them with some slick sales patter you’ve been taught. As Vince Lombardi once said, “If you’re not fired with enthusiasm, you will be fired with enthusiasm.” You also need to have a passionate desire to close the sale. You have to really want it! Passion is the fire that comes from within and persuasion is a form of art that feed off each other. And, if your passion bleeds what you want to sell, your art of persuasion can turn each deal into a masterpiece.

To achieve your ultimate goal and successfully close any deal, there’s always going to be some give and take. In any negotiation when you’re getting what you want, you need to be seen to be giving something in return. You should make sure that giving something gets you a step nearer to getting the deal on your terms. The art in this step, is in knowing what you’re giving up – you will make up 10X on what you’re trying to receive.

Don’t over-complicate the terms of a deal. The simpler you can keep an arrangement, the easier it is to understand and the more likely it is that your prospect is going to say yes. Be straightforward. Be humble. Be likeable.

The only way to find out what someone wants is to ask. And keep asking. People love to tell you about themselves and their requirements. But even more importantly you can use questions to solicit affirmative responses. Get them to keep saying ‘yes’ to points that you make and at the end of that discussion, you’ll realize you’ve already got the order – because the idea of the sale is theirs not yours.

There’s an old saying that’s very true: if you win the argument you lose the sale. Yes, you feel passionately about your product or service and your potential customer has said something completely ridiculous. But it doesn’t serve any useful purpose to get into an argument about it. Sometimes, I have to bite my tongue. But, I never lose my cool. I try to educate, I remain calm and never argue or become controversial. Keep it light. Another approach is to move on to discuss an area where you can agree on something.

Even worse than getting into an argument is getting mad. That’s a surefire way to lose the deal. If you can keep your cool you can keep your deal. Don’t take it personally. If you can stay calm and composed; if you can present an amiable demeanor in spite of provocations you will gain a reputation of being someone pleasant to deal with, someone who will be recommended. People prefer to work with people who are open. Speak slowly but confidently. Don’t become loud, abrasive, or pushy. As I mentioned before: Confidence, Conviction and Charisma are everything in the Art of the Sale.

A good way to make someone feel comfortable with your proposition is to let them know that they’ll be in good company. Bring up names of mutual acquaintances or emphasize others with whom you’ve had a great working relationship. It will make them feel secure. But, don’t be a “Hollywood name dropper.” What I mean by that, don’t fake your way into who you know or who you do business with. Authenticity is one of the biggest assets and hardest things to find in any relationship. The minute someone can smell things aren’t true – they will walk for good.

8) Know When to Say Nothing

You can talk yourself out of a sale—if you’re not careful. Many inexperienced sales people babble on far too long about the benefits of their product, long after the customer has heard enough to make a buying decision. In talking so much they run the danger of raising topics or concerns that would never have occurred to the customer. So, the golden rule when you reach the point of closing the deal is this: say nothing. Stop talking. He who speaks next, loses. Resist the temptation to talk and talk—and your closing percentage will increase. Remember, your not selling a feature, a product, or anything tangible. You are selling opportunity. Once, they’ve been sold, wait for them to react.

Make it a rule never to bad mouth your competitors. Obviously, you can point out where your product has strengths and theirs has weaknesses. But there’s no need to say that what they have to offer is “garbage” in comparison. People tend to find it off-putting—to the point where you might score points but lose the game. Nobody wants to deal with negativity not backed by substance.

Even if you’re quaking inside because this is a deal you can’t afford to lose—you can’t afford to show it. Put on a bold face. Do everything in your power not to show vulnerability. Fight to seem relaxed and confident. Don’t hurry the conversation and don’t push too hard because you may well get push back. And if you don’t get this deal, don’t beat yourself up. Move on to the next target.

Bonus Tip: Don’t Take No For An Answer

A good closer persists in trying to turn a no into a yes. He finds a way to revisit areas of contention and rephrase his sales points. It’s not being rude or overbearing. You can be polite and persistent. It’s an indication that you truly believe in what you have to offer. Keep confidently moving forward and enough people (not all) will say yes. I’ve always considered the definition of “No” to be “just not right now.” You’ll get another chance. And, if you follow the right steps – it will happen in due time. That’s why it’s even more important to never sour any relationship. Otherwise, you will never know when that “No” could’ve ultimately been a “Yes”.

All of the above points lead up to the final, extremely important one: it needs to be a win-win. Not only should you walk away feeling happy but so should the other person. That’s the only viable outcome for long-term success.

And, finally, relationships are everything in life. Whether in personal or business – they define how successful we will become. You foster them and they grow with you. But, never burn a bridge, no matter what the circumstances are; because you want to have that last laugh and the sale.

So, take the advice of that late great comedian, Jimmy Durante: “Be nice to people on the way up because you will probably meet them on the way down.”

What’s your top tip for being a great closer?

[Ed. Note: At the age of 16, Gurbaksh dropped out of high school to pursue his dream as an entrepreneur and started his first company, ClickAgents. Eighteen months later, he sold it for $40 million to ValueClick. Since then Gurbaksh has founded three more multi-million dollar companies and is currently the founder of BeProud Foundation – an organization designed to create awareness campaigns to stop hate crimes. For more information on Gurbaksh, please visit: http://www.chahal.com/]

Posted in Careers, Entrepreneur, Skill Development, Wealth
#repost from @motivationmafia With all the hard w