Over the past few days John Romaniello, author of Final Phase Fat Loss has helped us to understand how hormones affect the whole fat loss process. So, there is more to it than just calories in calories out!

Let’s get right into today’s expert interview series, where John shares with us some exercises and substitutions.

Craig Ballantyne: I was actually going to have you go into the specific workout and suggest substitutions for that workout.

John Romaniello: So I did a barbell push press, which is sort of an overhead explosive movement, followed by a bent over row and followed by a front squat.  There were 185 pounds on the bar, all three of those exercises, and I just did them for 20 seconds and then 30 seconds and 30 seconds for as many reps as I could.

Now, what I would suggest that you do, if you don’t have a barbell you could do a few things.  Let’s start with resistance bands because you can get those anywhere.  What you would do is do an overhead press with the resistance band where you’re standing on the band with your legs spread kind of wide.  And again, the wider you spread your legs there the more tension you’ll have on the band and the harder that is.

So you would just do the resistance band overhead press.  Do as many reps as you can in 20 to 30 seconds, so pick a time frame.  See how many reps you did.  And then the next time you do it, you either stand even wider to make the resistance harder, or use a heavier band.  A lot of times when you buy these bands from Bodylastics or the other band manufacturers they’ll come with multiple tensions.

So for the bent row you could tie the resistance band around anything from a banister to the leg of a chair, hopefully that is sturdy and isn’t going to move, around a door knob.  And then you would just do a bent over row.  And then for the front squad again you can stand on the band with your legs spread and put your hands into kind of the same position you would for a barbell squat and just go from there.

So I would suggest that someone just used two separate dumbbells for just bent over rows, and then they bring those weights up and let them rest on top of their shoulder for squats, or even keep them down at their sides and do dumbbell squats.

In a perfect world, you’ll be able on the next set to increase weight and try to get more reps.  If you can’t do that because your equipment is limited, just focus instead on increasing the number of reps.  And maybe if you have shoulder issues and you don’t want to press things over your head. You can just do anything where you’re pressing forward.  So if you have machines at your gym you can do a chest press or a cable press.

If you are again working out at home you could do a bench press or a dumbbell bench press.  And finally, if you’re just using your body weight, and you don’t want to press over your head. You can go right into a pushup.

Craig Ballantyne: I don’t want to belabor the point too much, but are there any other substitutions?  Let’s talk about substitutions for a little bit longer for squats, bench and dead lifts.  You’ve covered a lot for the pressing.  Is there anything else you just want to mention?

John Romaniello: The biggest problem that people run into with squats is really that if they’re training at home they don’t have a squat rack, so they can’t load up heavy, or if they’re doing dumbbells they just run out of weight because people tend to get very strong with their legs very quickly.  And so the easiest thing to do, as you obviously know, is to move onto single leg variations.  So to start, what I really like to do is a Bulgarian split squat with the rear foot elevated.  And I like to hold a single dumbbell goblet style.  So you can just make sure you’re going nice and far down. 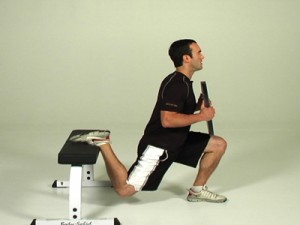 And then if you want to make that more challenging, once you’ve kind of gotten past the point where the heaviest dumbbell that you own isn’t challenging enough for you. You can put a step in front of the bench.

So now your front foot is on the step, and your rear foot is elevated on the bench, and this is called a Bulgarian split squat from a deficit.  It extends the range of motion, and it forces you to work a little harder.  So that’s another way to make that exercise more difficult.

Then there’s another one I like called the one-legged squat to bench. Where you would stand in front of a bench, with the bench behind you put one leg straight out on to the bench.

So let’s say your left leg is straight out ahead of you, and now your weight is all on your right leg.  And all you want to do is control the decent onto the bench as slowly as you can.  And what you’ll notice is that about an inch to two inches before you actually sit down you just kind of lose control.

That’s the weakest part of the range of motion for most people, and that’s one of the reasons that power lifters work on box squats to just try to train that last part of the range of motion.  So you can do a one-legged squat to bench and then eventually add weight by holding onto a dumbbell.  So there’s that.  You could do that with just your body weight, and then eventually you can make it harder with resistance bands and things like that.

So then finally, for dead lifts and things – one-armed variations of the dead lift or one-legged variations of – single leg Romanian dead lift is great where you hold either a barbell or a single dumbbell in front of you, or even your body weight.  Or you can tie a resistance band around something that’s low to the ground, and as you straighten up at the top of the dead lift the resistance will kick in and that will make it harder.  So there are a lot of fun variations that you can do.

That’s all for today. Join me in part 4 where John gets more into workout duration.