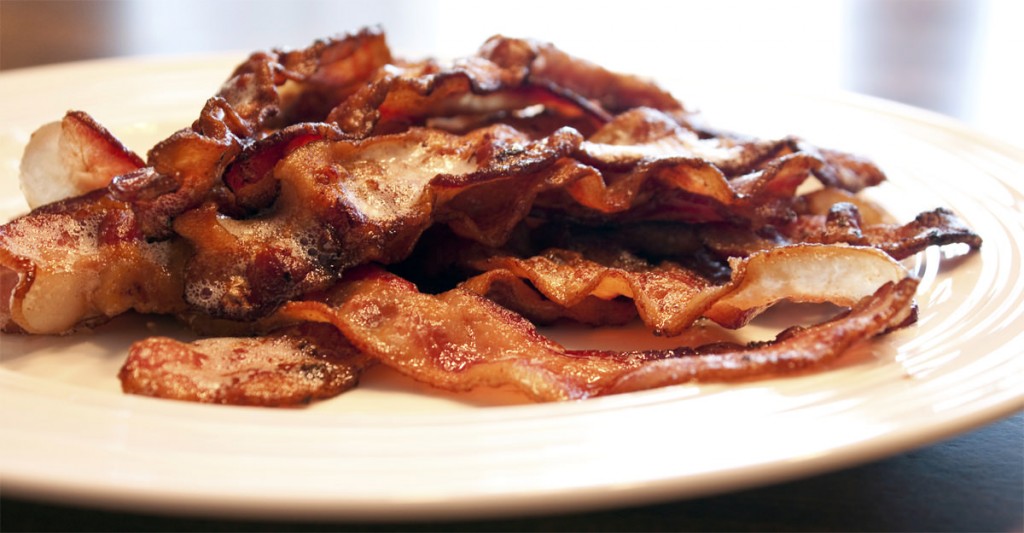 Breaking Muscle: These days, walking through the grocery store is like swimming through subliminal messages and constant setups to get us to buy certain products. Everything is arranged in a certain way because food marketers know us too well, and what we buy is almost scripted.

I’m okay with this to a certain point, but when you mess with my bacon, I find it downright offensive. Bacon now has “gluten free” labels on it, because we associate gluten free with “healthy.” Many of us are starting to figure out the gluten free thing.

However, other labels are more confusing to consumers. Packages proclaiming “uncured” and “no added nitrites” are coming into fashion. These words make it sound like the food is less processed, and if so, it must be healthier, right? But as it turns out, this isn’t quite the truth.

The Truth About Nitrites

For many years, bacon was cured with sodium nitrite to prevent bacterial contamination and give it the color and taste we have come to love and expect. In fact, sodium nitrite plays a large role in preventing botulism.

"Nitrites are a good thing, as they help produce nitric oxide, a potent vasodilator (which is a fancy way of saying it helps promote blood flow)."

But consumers get confused because of the popular belief that nitrites are involved with increases in cancer. This is simply false. In fact, nitrites are common in our diet, coming from fruits and vegetables. Nitrates (NO3) in these foods are converted to nitrites (NO2) by bacteria in our saliva.

Nitrites are a good thing, as they help produce nitric oxide, a potent vasodilator (which is a fancy way of saying it helps promote blood flow). Some believe the nitrate content in fruits and vegetables are partly responsible for the blood pressure reductions seen in diets high in these foods, such as the DASH diet.

The culprit for the cancer scare are nitrosamines. These are compounds formed when amines from protein in the meat react with nitrites. These nitrosamines have been shown to be quite dangerous in the lab, but human evidence isn’t strong. Still, it seems like a good idea to avoid them.

Food companies have combatted this problem by slightly reducing how much nitrites they add, coupled with adding vitamin C. Vitamin C helps block the conversion of these compounds to nitrosamines. Cooking methods can also have an effect on how much nitrosamine is made. In short, the less burnt, the better.

Uncured Bacon Is Not All It Seems

Now, having this information, we can figure out how food companies are making more money by adding a few phrases to the package. “Uncured,” “natural,” and “no added nitrites” are simply words that food companies know people want to see. According to the USDA, bacon that does not have added nitrites must be labeled “uncured” and “no nitrates or nitrites added.” If you are a food marketer, this is sweet news.

"Why would we pay a few extra dollars for something that may potentially be more harmful to us? It certainly doesn’t seem any more beneficial."

If you remember that vegetables are high in nitrates, know that celery is at the top of the list for nitrate content. By adding celery powder, you are adding nitrates. Sprinkle in some good bacteria, and you have plenty of nitrites. All of this can be done under the “uncured” cloak. You may be okay with this, thinking it is still a more natural way of doing things. But the problem with the more natural way is that it is not as predictable or regulated.

For example, vitamin C is added to cured bacon (you may see ascorbate or erythorbate on the label). In uncured bacon, I don’t often see Vitamin C on the ingredient list. So, we have no way of knowing how many nitrites are actually in uncured bacon, nor do we know how many nitrosamines are being formed. Why would we pay a few extra dollars for something that may potentially be more harmful to us? It certainly doesn’t seem any more beneficial.

Some may say, “Who cares? Bacon is bad for us anyway!” While bacon has a high percentage of saturated fat, it also has an almost equal amount of the so-called healthy monounsaturated fats. And the truth is, we need a blend of different types of fat. Many people have turned to turkey bacon as an alternative. But turkey bacon faces similar processing issues and also has additives like smoke flavor and canola oil.

I wouldn’t put bacon in a “superfood” list, but I’d put it in a “super awesome” category. It can certainly be a part of a healthy diet in reasonable amounts. So, let’s keep the bacon in bacon!