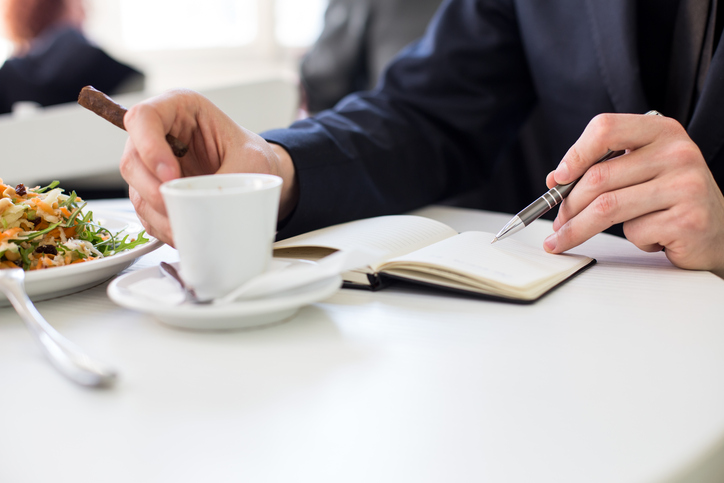 At least once a week, someone I hardly know invites me to dinner. Most of these invitations come from people who used to read my Michael Masterson essays on entrepreneurship in Early to Rise or my books on business and marketing for John Wiley & Sons.

I demur because (a) I don’t have much spare time, (b) I don’t need any more friends, and (c) I’m pretty sure that what they really want is a free consultation.

But last month, I got a different sort of invitation. It was from a guy who had been, in fact, an avid and enthusiastic consumer of my ideas. But he was a city government worker—which struck me as unusual—and he didn’t want any advice. He just wanted to say “thank you.”

He made that last point clear several times as he worked through the barriers I’ve set up to protect my personal privacy. He didn’t say what he wanted to thank me for, but he did say it was something “great” and that it would make me “happy.” He was employing what John Forde and I call the secret lead (Great Leads) to hook me, and he hooked me. Good for him.

We met at Quality Meats on 58th Street in Midtown Manhattan. Although I had met him once before at an awards ceremony, I wasn’t sure if I would remember him. But as soon as I stepped foot into the crowded foyer of the restaurant, he came over and greeted me with a hearty handshake. He was very happy to see me, and that made me happy to see him.

He led me to the bar, where he introduced me to the maître d’, who offered me a glass of champagne and told me that he had reserved us the “best table in the house in the quietest part of the restaurant.” He said it was the table that Donald Trump and his son sat at several times a week. He pulled out a chair and told me that it was “The Donald’s” chair.

It was all so… cinematic. Almost embarrassingly so. But Michael was bubbling with enthusiasm. I could see that he was eager to tell me his story. And at this point, I was eager to hear it. But before he did, he had the good manners to inquire about my life and my family and so on. Then he summoned the sommelier and insisted I choose the wine, and then we ordered our meals.

After our waiter cleared the first course, he told me the story. It turned out to be quite a story, indeed.

About six years ago, he happened to read one of my essays on procrastination. In that essay, I was making the point that sometimes people take themselves all the way to the 20-yard line of some goal and then stop there, paralyzed by fear.

I said something like, “You may be sitting at your desk right now reading this, knowing that if you pick up the phone and make just a few phone calls, you might be able to launch your dream. All it takes is to pick up that damn thing and dial. Do it right now.”

So that’s what he did.

His idea was a good one. As a city government worker, he had noticed a business opportunity that was invisible to everyone but him. When a truck driver gets in an accident, the company he works for is subject to a lawsuit. If the trucker is driving with a suspended license, he is in serious trouble.

The problem is that the driver could have had a perfectly good driving record when you hired him but could have gotten into trouble and had his license suspended just days before his accident.

His idea was to create a database, tied into the motor vehicle department, that could provide truck companies with up-to-the-minute statuses on all of their registered drivers. He had been thinking about this business for years and had even worked out in his mind many of the kinks. He had even researched and created a list of truck company owners who might want to use such a service. He was on the two-yard line but had not taken a step in two years.

“After I read that essay, I picked up the phone and called everyone on my list. I made 10 phone calls and got eight appointments.”

“That was great, but what is even better is that I just sold my business for $8 million.”

“And as far as I’m concerned, I have you to thank for that.”

“Don’t be ridiculous. You did it yourself.”

“I know what I did,” he replied. “But it all began with making those phone calls. And I know for certain that your essay motivated me to do that.”

In 2008, John Wiley & Sons published a book of mine called Seven Years to Seven Figures. In that book, I hypothesized that it was possible to develop a seven-figure net worth in seven years or fewer. I based my theory on my own experience starting dozens and dozens of multimillion-dollar businesses over the years and the experience of about a half-dozen people I had mentored. Their stories comprised chapters of the book.

I didn’t have a great deal of factual proof to support my theory. But I wasn’t interested in making my argument that way. I had done it. So had others I knew. I believed it was possible. And I believed I could help people who wanted to replicate the experience.

The book was well received, but there were doubters who challenged my argument. “You can’t get wealthy in America anymore,” some of them said. Others said, “He and the people he helped might have done it, but there’s no hope for the average guy.”

But here I was, having dinner with someone I didn’t know and didn’t mentor, but who had read my book and had created a multimillion-dollar fortune in fewer than seven years.

I was so happy for and proud of Michael. And I was grateful to him too. After all, he was living proof of my book’s basic proposition: That despite all of our country’s economic problems, you could still become wealthy in a relatively short amount of time.

When I put away my Michael Masterson pen, I retired the idea of writing about business and entrepreneurship. After writing several thousand essays and a dozen books, I felt I had said everything I had to say on those subjects. But this dinner with Michael changed my mind.

I’ll leave you with the thoughts that I had after my dinner with Michael:

This article was originally published in The Crux.

Posted in Articles, Entrepreneur, Wealth
This error message is only visible to WordPress admins