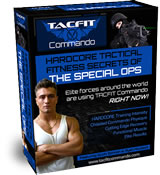 Yesterday Flow Coach, Scott Sonnon takes us through the six years he spent in Russia researching alternative movement methods as he came to know a form of martial arts called Sambo.

Having a combat background Scott shares a completely different perspective when it comes fitness.  Today we take a look at the definition and methods of his training program.

Craig Ballantyne: How did you get working with the soldier type client? It must be a difficult world to get into. Now, obviously you have quite a different background than the average body building trainer down at Gold’s Gym.

Scott Sonnon: The older people will remember that for the Soviet Union sports was a political platform, so their Special Forces soldiers were the same as their professional athletes. They were one in the same. If they were going to invest those millions of rubles into an athlete or into a soldier, they were going to consolidate their efforts. So, my athletic training background ended up being a special operation trainer background.

It was inadvertent, even I come from a military family it wasn’t something I attempted to do. I fell into it and when I came back to the states, I mean the approach that I had was just easily embraced by law enforcement and military much more than the average fitness individual. Because you can see in the movements that we practiced that there’s a tactical connection to it.

So the average person that comes into fitness for the first time their concern is, “I want to lose fat, and I want to gain muscle,” you can virtually do anything to accomplish that if you have the DISCIPLINE to do it.

However, there were two different questions that I had to ask. The first is, does it have a tactical relevance and is this movement survivable? So if I do this moment how will it impact me in a crisis? If it can’t augment my function, then I can’t do it.

The second question is, is the movement sustainable? So, if I perform this repeatedly. What’s going to happen to my body? For me, when I was young they put us through a battery of tests in Russia, and basically they determined that physiologically I was double my chronological age.

So, I basically was a 40-year-old living in a 20-year-old body. That wasn’t good for me. I had a life insurance policy that required me to go through an examination because I was traveling into very marginal places with different units, and I had children whom I was concerned about.

Coming out of the exams the agent came to me, and he said, “I don’t get it. You have the least expensive premium we’ve ever seen.” I said, “What are you talking about?” He said if you look at these results they show that even though your 40-years-old you basically have a 20-year-old body.  So, this type of training has to be sustainable.

For me, it gave me 40 extra years of functional living. It has to be tactically relevant, and it has to provide the physical benefits that most people are looking for when they first approach a fitness training regimen. These things are easily recognized for law enforcement and military personnel, but it’s not so easy for the average fitness person.

I can’t really say that anymore, I mean with the functional training revolution people are looking for things that are fun to do. They are not looking for something that’s going to be boring them out of their mind. So, when they see unique movements it’s something that is changing the landscape of fitness. I believe that more people are interested in unique approaches to fitness than the same old same old.

That’s it for this excerpt, but we’ll be back again tomorrow with part 3 from TACFIT author  Scott Sonnon where he covers the importance of active recovery.

Yesterday Flow Coach, Scott Sonnon takes us through the six years he spent in Russia researching alternative movement methods as he came to know a form of martial arts called Sambo.

Having a combat background Scott shares a completely different perspective when it comes fitness. Today we take a look at the definition and methods of his training program.