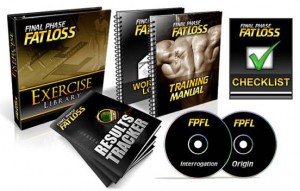 Yesterday fitness expert, John Romaniello addressed the misconception about the phrase “’NO PAIN, NO GAIN” when trying to build muscle or to burn fat.

As the author of Final Phase Fat Loss, he is constantly developing new workouts that are fun, challenging, and mentally engaging, based off the valuable feedback he receives from individuals that use his programs.

Today are a few examples….

Craig Ballantyne: Do you want to go into the rep scheme that you use?

John Romaniello: Oh sure.  Yeah, yeah.  I like to pick a weight that I can do anywhere between 12 to 15 reps with for all of those exercises.  And for those it was about 175 pounds.  But a lot of people when they set up complexes it’s like, “Okay, just do sets of five.  Do 5 power cleans, 5 front squats, 5 bent rows, 5 push presses and 5 stiff-legged dead lifts and then you’re done.”  I’m like, “Okay, that’s fine.  You could do that.”

But what I like to do to make it a little bit more interesting, I like to do pyramids, ascending and descending.  So like I’ll go through and I’ll do 6 power cleans, 6 front squats, 6 bent rows, 6 push presses, 6 dead lifts.

Then I put the bar down and rest minimally up to 75 seconds and then pick it up again and now we do 5 reps for everything and then rest again, and then do 4 reps of everything.  So you’re getting more and more fatigued but you’re also doing less work.

It  just keeps you more mentally engaged.  And it’s just a more entertaining way to do it.  And I think that when you have different reps schemes to set complexes up you’re more likely to enjoy them.  And the more you enjoy them the more likely you are to do them more often.

It’s challenging certainly.  I recommend that people start this with the bar, or maybe 5 pounds on each side, 10 pounds on each side and work their way up.  I do this with 175 pounds but I’ve been working up to that for literally two years.  And at this point I’m very well conditioned for complexes because they’re one of my favorite ways to train.  But it’s fun.  But setting them up in that way is a lot of fun.

Craig Ballantyne: Yeah.  I mean, that just makes the challenge aspect of it much more valuable.  And I’ve always been a big fan of getting people to try and beat a record because then you’re trying to get a little more hooked on it and that way you’re more willing to come back and give it a shot again next week.

So at no point are you ever really going to be like, “All right, well how much weight do I jump off?  Should I go up to 30 pounds, 80 pounds, 90 pounds?”  So you don’t really have to worry about the load as much because it’s conditioning exercise after all.  And this is one way to do complexes.  There are millions.  It’s just a cool little benefit there.

Craig Ballantyne: Okay, very good.  Now let’s talk a little bit more about your program and the changes that you’ve made this year from last year from the original group, what changes you’ve made and why.

John Romaniello: Well, there are a couple of things.  First I wrote a bunch of new workouts because when I released Final Phase Fat Loss I wanted it to be something that was kind of like a community and I wanted to give new stuff – you could just do the same workouts from last year and get great results.  But I’ve learned a lot this year.

So my goal for Final Phase Fat Loss was to consistently give every single new upgrade to people who had already bought previous versions.  So if you bought Final Phase 1.0 you’re going to get the new workouts, and I wanted it to be worthwhile for them to look at it so they get new workouts.  If you buy Final Phase 3.0 next year, if I release it, you’ll get those workouts as well.

So the impetus behind writing the new workouts was to make it more of a challenge for me to do them.  To make them more interesting and to show a little bit more of my growth as a trainer.  But also so that these people who had been with me since last year would have something to look forward to.

And the other thing was, when I released Final Phase last year I released it to not just people on my mailing list, but 5,000 people who didn’t know me.  They bought it based on recommendations from a number of other trainers.  And I got to know them over this last year and they got to know me, and it was a really valuable learning experience because people who had known me for a while were kind of familiar with my style.  And these people were new and they had some complaints.  They’re like, “Well, why isn’t this explained properly?”  Or, “What did you mean when you said this?”  Those questions hadn’t come at me.

So really what’s been happening over the past year is people were getting a great workout and getting great results but the feedback they were giving me, particularly whatever negative feedback I got, was extremely valuable because I realized that if you didn’t necessarily know how to read programs because you’ve been following my work on T-Nation and in Men’s Health for five years maybe I need to explain that a little bit more.

Some people like the Craig Ballantyne style warm-up, other people like the Vince Delmonte warm-ups.  He does bloom twists and the whole thing.  And other guys are like they’re into MMA and they have their own style.

But what I failed to realize is that some people, they want a specific warm-up just for Final Phase.  And so I wrote that.  That wasn’t something that I didn’t include because I was lazy, I just didn’t think people really cared.  And so stuff like that I’ve come to realize that people, they really want all the bases covered.  And I realized that it was a little bit presumptuous of me to try and figure out what people want and didn’t want.

So here I’ve tried to fill in all the gaps that people have revealed to me over the course of the year and then let them decide how much they want.  So I’ve expanded the nutrition section a little bit.  I talk a little bit about fasting in there.  You know that I fast one day per week, and that’s something that I’m really learning a lot about from our mutual friend Brad Pilon over at Eat Stop Eat.  So I mention that in there.  It’s not a requirement for the program.  It’s just something that’s interesting.

And then a lot of what I’ve put on the blog this year – the cool thing about running a blog is that any time I’ve mentioned something in the program, in the book itself, I can now link to a related blog post and allow people to have a place to go learn and ask questions and read what other people have asked.

So let’s say, for example, in the section I have on body fat testing I wrote a three blog post series on that.  Do they have to read the whole thing?  No, but if they scroll through it maybe their question will be answered.  And because I already have that much content generated over this past year I’ve been able to sort of fill it and condense it, take the main bullet points from those three blog posts and put them into the book.

So the book itself isn’t just everything that I’ve learned from other people in terms of them wanting it for the past year.  It’s stuff that I’ve also written about this past year and gotten better at doing and better at communicating.  And now that’s directly in the book.

So this book, it’s not just the additions to programming and filling up some holes.  It’s also taking the best of the Roman Fitness Systems blog and condensing it and putting that stuff in there because I think it’s relevant.

Next up… We’ll talk about nutrition in part 8.