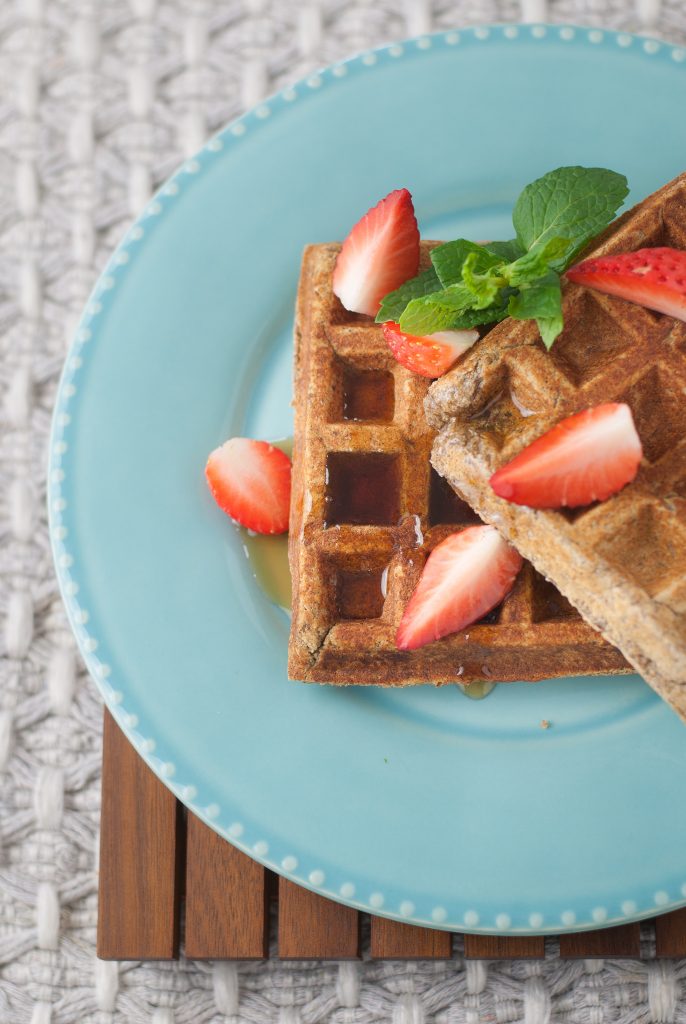 And that makes all the difference. This is why my cookbook is called Eat More, Burn More. It’s not a gimmick; it’s very real. If you “hack” recipes and turn them into wholesome, nutritious dishes that don’t make you gain an ounce, then you have the best of both worlds: You can have your cake and eat it too.

Back to the waffles. On page 19 of Eat More, Burn More, you will find a great recipe that was inspired by traditional Belgian waffles.

When I grew up in France, which borders Belgium, Belgian waffles were considered somewhat exotic. That was back a long time ago, in the eighties. I remember going to the fair and we would have Belgian waffles as a treat. They were made to order, right there in front of us, using the hot iron with the traditional checkered pattern. As kids, we would watch them cook in front of our eyes, witnessing a culinary miracle: liquid batter solidifying, becoming light and crisp, smelling delicious.

On Amazon, waffle makers are cheap and you’ll find one at $20 and up. So really there shouldn’t be any excuse not to try my recipe on page 19.

Now, let me tell you about that recipe. You’ll want to hear it if you’re even remotely interested in losing weight.

You see, there is a big difference between the waffle (or pancake) mix you get at the store, and making it from scratch.

First, it doesn’t take more time to make it from scratch. The only convenience is to get it from one place: a box. Otherwise, the mixing takes the same amount of time: 15 minutes tops.

Instead of white flour, which raises your blood sugar like crazy (and leads to weight gain), I use high-fiber flours. High fiber content is great. Fiber makes all the difference. Flours like coconut flour, whole-wheat flour, buckwheat flour, and ground flaxseed are PACKED with fiber and that’s the secret of this recipe. A huge amount of fiber compensates and makes it acceptable for anyone trying to get and keep fit.

My Belgian waffle recipe also contains a bunch of other “tricks”.

[Chef Tip Alert] For instance, since I’m not a huge fan of butter-loaded recipes, I replace part of the butter with unsweetened applesauce. It has the same effect as butter. That’s an old trick from pastry chefs.

And, to add even more fiber, I include a mashed large banana to add some nutritious, healthy bulk, and provide a fantastic taste.

When you make this recipe, you might be surprised by how “heavy” these waffles are. That’s a good thing. Think of it as the weight of “wholesomeness”. These flours (coconut, buckwheat, whole-wheat, ground flaxseeds) are loaded with fiber and that makes them heavier.

That reminds me… My grandfather told me that it was at the very end of World War II that he first saw white flour.

Before that, all they had in France was whole-grain flour, which was much darker in color. Brownish, even.

You see, they started getting rid of the brownish, “unappealing” bran in flour around that time, and marketed it as a more “pure” flour. And to be fair, white flour does rise better and feels lighter in baked goods.

It’s an interesting anecdote, now that we take white flour for granted, and are going back to more nutritious, wholesome flours to bake our goods. 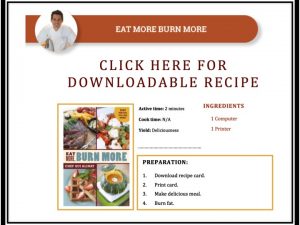 You should be able to find all these flours in specialty stores, or at Whole Foods or similar.

Refrain from messing with the recipe for instance if you can’t find coconut flour (now available in most supermarkets). You can’t really replace one flour with the other, at least not in 1:1 proportions.

You can play with it, but don’t necessarily expect the same result.

Belgian waffles are great for breakfast, “the most important meal of the day”, when you need the energy to start the perfect day. And surely my recipe will get you started with great nutrients.

In addition, you can top these waffles with a bit of pure maple syrup, and a ton of fruit, especially high-fiber fruits such as berries.

Whipped cream is optional, frankly. But if you must, add some with moderation, and whip it yourself (Just whisk heavy cream in a bowl until it gets to the right consistency).

Either way, ENJOY these waffles. Eating great food is about enjoyment, not restriction. Eat More, Burn More is what I always say. 🙂

Posted in Articles, Nutrition
#repost from @motivationmafia With all the hard w