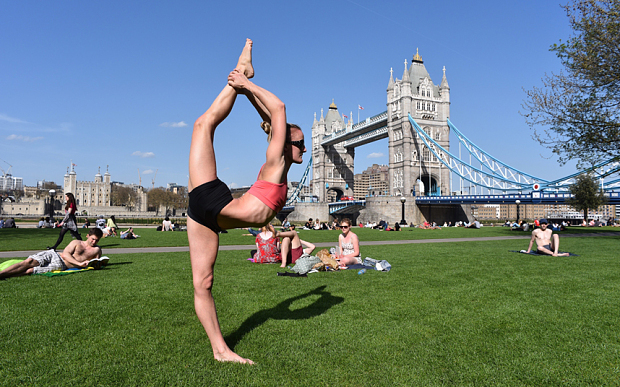 Until I won a series of yoga classes in my local pub Christmas raffle, I had never seen the attraction. All that stretching and sweating in a church hall surrounded by moaning strangers? I could think of more entertaining ways to spend an evening. The oven’s not going to clean itself, is it?

However, since I grudgingly hit the yoga mat (shame to waste a freebie…), I have become something of a devotee. My flexibility has improved, I feel stronger and I’ve banished my life-long slouch. And then this week yoga was revealed to bestow a hidden perk, something that takes a little practice and requires perfect technique, but that could attract a new legion of yogis: the “yogasm”.

It has long been known that strengthening one’s deep pelvic floor muscles can improve a woman’s sex life. But it is possible to experience orgasm on the yoga mat.

Yogis say that a combination of the Lotus position, the cross-legged sitting asana that is the bedrock of meditation, and Paranayma – a regulated, deep-breathing technique that includes rapid, pumping breaths – can bring about orgasmic effect. Demi Moore and daughter Rumer Willis are reported to be Kundalini devotees.

Beverley Drumm, a 50-year-old former business analyst in north London, has experienced the yogasm – during the first yoga class she ever attended. “It was so intense that I cried,” says Beverley. “I went up to the teacher afterwards and said I wanted to learn more.” That was six years ago. She now teaches the technique in her own yoga classes.

According to practitioners, yogasm requires not a specific position but a state of mind – it may take weeks, months or years of physical workouts to achieve it. But it is most often achieved during Kundalini, a form of deep meditative yoga designed to lead to spiritual awakening. “The Kundalini orgasm is not just a physical orgasm, but far beyond it,” explains Drumm, “like a huge release of energy. I get involuntary spasms and a ripple of energy through me, and experience the most intense ecstasy.”

But how exactly does it work? Barbara Carrellas, a 60-year-old former Broadway producer and author, has been achieving – and teaching others to achieve – yogasms for three decades. The New Yorker will share her wisdom with Londoners in June at a weekend workshop.

Well, it’s one way to get a rush of blood…

The trick, she says, is to focus your attention not on your Lotus asana, but on your breath. “It’s about working the pelvic floor,” she explains. “What we don’t understand so well in the Western world is that orgasm is an energetic event and not just a physical one. It’s holistic and has to do with your breath changing. If you take away the genital stimulation, all the other stimuli remain, which are much more a part of orgasm than we realise.”

A yogasm does not always feel the same as a physical orgasm, she says; rather, it is experienced all over the body. “Some people do have a genital orgasm at the same time, though, and spontaneous orgasms can definitely happen, too,” she adds. “I was able to do them after a lot of practice of the other breath and energy techniques.”

Anyone can achieve yogasm, she insists – even men.

“If you believe it’s possible, it is. I teach people just to breath a bit more fully and deeply than they usually do. I ask them to use their imagination and move this energy through their body. It’s a bit like mindfulness, a bit like meditation.”

A male Australian friend who has attended Kundalini classes reports having enjoyed the experience a little too much.

“It was so relaxing, I fell asleep,” he says. “All the women were having a very different experience. I closed my eyes because I didn’t know where to look, with all the moaning and groaning.”

According to Carrellas, the body is naturally primed to climax, and only social conditioning and self-control stops it happening spontaneously more often. “The reason more people don’t orgasm on a beautiful day in London is they don’t permit themselves to,” she says. “It’s important to remember that orgasm is the body’s natural way of releasing tension, so it will seek out ways to go there if we let it.”

My own yoga teacher, Susan Yates, has yet to witness anyone in her class having an yogasm – but says that yoga is beneficial in the bedroom.

“The main thing about yoga is that it gets people to have a better relationship with themselves. It’s about bringing people back to to understanding their own bodies in the best way that they can. People will sometimes text me saying that they felt euphoric after a class or that they have had better sex because of it.

“The other thing is that it helps them to feel better physically and emotionally, so they feel more alive in their relationships, and from that they might have a better sex life.”

For me? Well, that’s between me, my husband and my yoga mat.

Posted in Health, Sex
This error message is only visible to WordPress admins