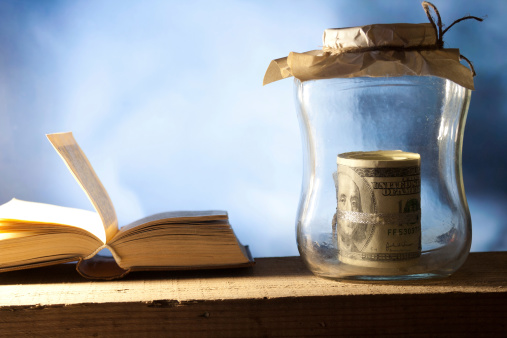 It’s an inspiring tale… a triumph of lethargy and sloth.And if you take its wisdom to heart, you’ll be ahead of 99.9% of your fellow investors.The tale – and the wisdom – comes from Robert Kirby.Kirby was a great money manager who wrote a lot of wise things about investing. He was active in the latter half of the 20th century… and cut from the same intellectual cloth as Warren Buffett.One of Kirby’s best ideas is the “coffee-can” portfolio…

The coffee-can portfolio concept harkens back to the Old West, when people put their valuable possessions in a coffee can and kept it under the mattress. The success of the program depended entirely on the wisdom and foresight used to select the objects to be placed in the coffee can to begin with.

The idea is simple enough: You find the best stocks you can and let them sit for 10 years. You incur practically no costs with such a portfolio. And it is certainly easy to manage.

The biggest benefit, though, is a bit more subtle and meaningful. It works because it keeps your worst instincts from hurting you.

In his paper, Kirby told the story about how his idea came about.

“The coffee-can idea first occurred to me in the 1950s,” Kirby writes. He worked for a big firm that counseled individuals on their investments then. He had a client he had worked with for 10 years whose husband died suddenly. She inherited his stock portfolio, which she moved to Kirby’s care. Looking at the portfolio, Kirby writes:

I was amused to find that he had been secretly piggybacking [on] our recommendations for his wife’s portfolio. Then I looked at the size of the estate. I was also shocked. The husband had applied a small twist of his own to our advice: He paid no attention whatsoever to the sale recommendations. He simply put about $5,000 in every purchase recommendation. Then he would toss the certificate in his safe-deposit box and forget it.

In doing this, a wonderful thing happened. Yes, it meant his portfolio had a number of broken stories worth $2,000 or so – small positions. But he also had a few large holdings worth $100,000 each. The kicker, though, was this: He had one jumbo position of $800,000 that alone was bigger than the total value of his wife’s portfolio.

As Kirby writes, “[It] came from a small commitment in a company called Haloid; this later turned out to be a zillion shares of Xerox.”

As I mentioned, it’s an inspiring tale, a triumph of lethargy and sloth.

It shows clearly how the coffee-can portfolio is designed to protect you from yourself – the obsession with checking stock prices, the frenetic buying and selling, the hand-wringing over the economy and bad news. It forces you to extend your time horizon. You don’t put anything in your coffee can that you don’t think is a good 10-year bet.

Poor Kirby had been diligently managing the wife’s account – keeping up with earnings reports, trimming stocks, and adding new positions. All the while, he would have been better off if he followed the idler’s creed and just held on to his ideas.

The coffee-can portfolio is the ultimate buy-and-hold portfolio. You put a bushel of well-chosen stocks in a coffee can and forget about them for 10 years. Open after 10 years and, the theory goes, pleasant surprises await you.

I’ve never read anything by Kirby that didn’t strike me as wise. (Someone ought to republish his papers in a book.) He is the antithesis of the trader, of those who would try to chase what’s hot and what’s moving. In another paper, he writes:

I believe an article by Benjamin Graham that I read many years ago carried the opinion that the development of liquid, high-volume auction markets for shares of publicly held American companies has been about the worst thing that has ever happened to the investment business. I have a great deal of sympathy with his observation.

When you know you can sell something almost instantaneously, it messes with how you think about the purchase in the first place. You can be careless because you can get out quickly.

If you knew that every time you bought a stock you would have to hold it for a year, let’s say, you would buy with much more diligence.

That’s a simple idea. And Kirby’s advice is a logical extension of it:

I have said often to almost anyone who would listen that… a portfolio of securities [should] be run like a real estate portfolio… The typical real estate commitment is made in anticipation of a projected cash flow versus expenses, i.e., the future internal rate of return… the investor does not assume that he will be able to sell the property at a higher price to someone else later on. Common stock portfolios should be constructed, and their future returns measured, by the same set of criteria.

It is almost impossibly hard to live by this rule.

With constant measurement of returns and the oppressive 24/7 media cycle, the pressure to act is immense.

When your mindless neighbor doubles his money in Tesla in two months, the idea of an internal rate of return seems irrelevant and even pointless.

But then again, these are exactly the kinds of defeatist sentiments that bubble up during years of stock market exuberance, like 1929, 1999, and 2007.

Ironically, this is just when such unfashionable ideas are most important. That’s really the point I would leave you with…

It’s this kind of careful thinking, along with plenty of lethargy and sloth, which will make you money over the long term.